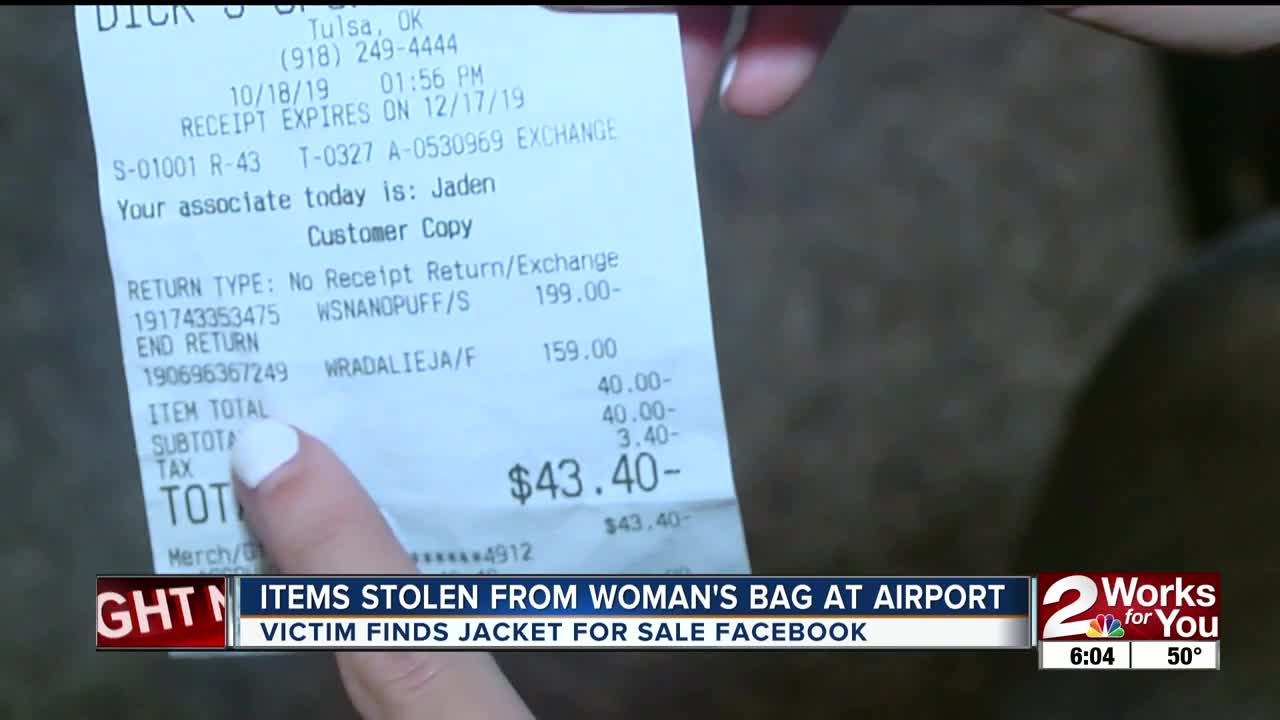 TULSA, Okla. — A Sapulpa woman is looking for answers after more than $1 thousand worth of items were stolen from her bag while flying American Airlines out of Tulsa.

Kinley Rice said when she got to her destination she noticed several items missing from her bag, including a brand new Patagonia jacket, a sweater, LuLu Lemon leggings, jeans and her toiletry bag. The missing item of biggest concern was her luggage tag containing her information.

“I felt violated," she said. "I was just in a hotel room by myself. I was just so uncomfortable because I didn’t know who had my information. I didn’t know who could contact me. You know, anybody can find you through your phone number. So that was scary.”

Kinley didn’t suspect who stole her items until she found a Patagonia jacket just like hers being sold on Facebook Marketplace. She matched the bar code on the tag of the jacket in the picture to the numbers on her receipt. After searching Facebook, she discovered the seller works in baggage services at the Tulsa International Airport. She is an employee of Piedmont Airlines, which contracts with American Airlines for baggage handling services.

Kinley said she filed a claim with American Airlines customer service. She said she also filed a police report with the Tulsa Police Department. She said the whole situation has been stressful and frustrating.

“You think you can trust people, you know, when you pay money for them to be responsible for your bag," she said. "And you think that it should come back in the car. You know, obviously, your bags are going to get beat up and stuff being thrown around, but your contents inside should all be in there once you reach where you’re going.”

American Airlines gave Two Works for You a statement saying:

“American is very concerned with these allegations. We are investigating this in coordination with Piedmont, and are fully cooperating with authorities.”

Kinley said American Airlines told her she would be reimbursed $1 thousand for her missing items.