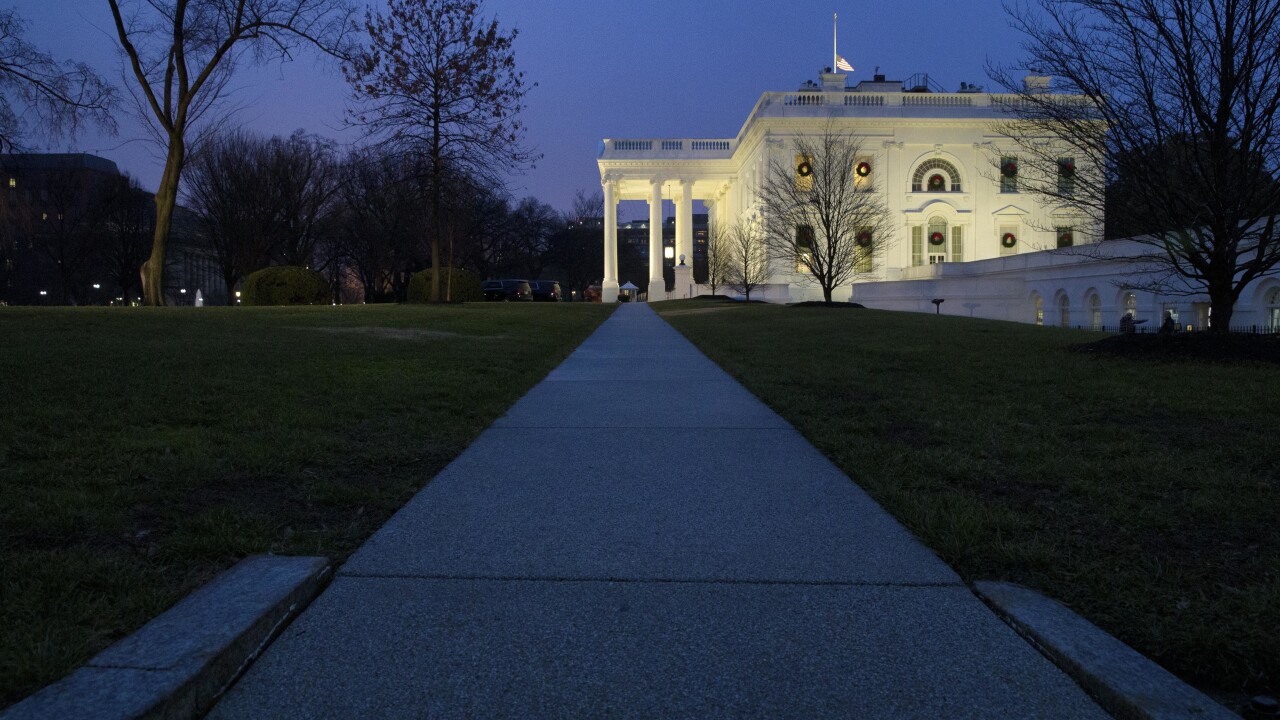 Alex Brandon/AP
The White House is seen, Friday, Dec. 28, 2018, in Washington. The partial government shutdown will almost certainly be handed off to a divided government to solve in the new year, as both parties traded blame Friday and President Donald Trump sought to raise the stakes in the weeklong impasse. (AP Photo/Alex Brandon)

House Democrats have unveiled a package of bills that would re-open the federal government without approving funding for President Donald Trump's border wall with Mexico, establishing an early confrontation that will test the new power dynamic in Washington.

The House is preparing to vote as soon as the new Congress convenes Thursday, as one of the first acts after Democrats take control, according to an aide who was not authorized to discuss the plan and spoke on condition of anonymity.

Trump told Fox News Channel he was "ready, willing and able" to negotiate, but added, "We have to have border security and the wall is a big part of border security."

President Donald Trump says he's "ready, willing and able" to negotiate an end to the partial government shutdown that has now stretched into its 10th day.

Trump tells Fox News Channel in a year-end interview set to air Monday night that Democratic congressional leaders Chuck Schumer and Nancy Pelosi "can come over right now" and "could've come over anytime" to try to hash out a solution.

He adds that, "A lot of people are looking to get their paycheck, so I'm ready to go whenever they want."

Trump, however, is still insisting that any deal include billions of dollars to fund his long-stalled southern border wall. Democrats say that's a no-go.

The interview will air on "All-American New Year."

The House is preparing to vote on the package Thursday when the new Congress convenes. This is according to an aide who was not authorized to discuss the plan publicly and spoke on condition of anonymity.

It will include one bill to fund the Department of Homeland Security at current levels through Feb. 8, with $1.3 billion for border security.

The package will also include six other bipartisan bills to fund the departments of Agriculture, Interior, Housing and Urban Development and others closed by the partial shutdown. Some have already passed the Senate. Those bills will provide money through the remainder of the fiscal year, to Sept. 30.

The partial government shutdown is in its second week over Trump's demand for $5 billion for the wall.

President Donald Trump says he's waiting in the Oval Office for Democrats to return to Washington and negotiate an end to a partial government shutdown.

Trump tweeted to Democrats on Monday: "come back from vacation now and give us the votes necessary for Border Security, including the Wall."

There has been little contact between the White House and congressional Democrats for more than a week, other than the Republican president's Twitter barbs, as the two parties remain divided over his insistence on funding for a wall along the U.S.-Mexico border.

Trump says Democrats supported border security funding before, though that funding provided for fencing, not a wall. Trump tweets: "You voted yes in 2006 and 2013. One more yes, but with me in office, I'll get it built, and Fast!"

Trump promised on the campaign trail that Mexico would pay for the wall, but Mexico refused.

President Donald Trump is insisting he wants to build a wall along the U.S.-Mexico border despite differing public assertions by three of his advisers.

Trump tweeted Monday: "An all concrete Wall was NEVER ABANDONED, as has been reported by the media." He adds: "Some areas will be all concrete but the experts at Border Patrol prefer a Wall that is see through (thereby making it possible to see what is happening on both sides)."

Outgoing White House chief of staff John Kelly told the Los Angeles Times in an interview published Sunday that Trump abandoned the notion of "a solid concrete wall early on in the administration." Kelly said, "To be honest, it's not a wall."

The wall has been at the center of an impasse that has led to a partial government shutdown that will extend into 2019. Trump is insisting that Democrats fund the wall, which they oppose.

Three confidants of President Donald Trump, including his departing chief of staff, are indicating that the president's signature campaign pledge to build a wall along the U.S.-Mexico border would not be fulfilled as advertised.

Trump sparked chants of "Build that wall!" at rallies before and after his election and more recently cited a lack of funding for a border wall as the reason for partially shutting down the government. At times the president has also waved off the idea the wall could be any kind of barrier.

However, White House chief of staff John Kelly told the Los Angeles Times in an interview that Trump abandoned the notion of "a solid concrete wall early on in the administration." Others said border security could include a wall, fencing and high-tech monitoring.