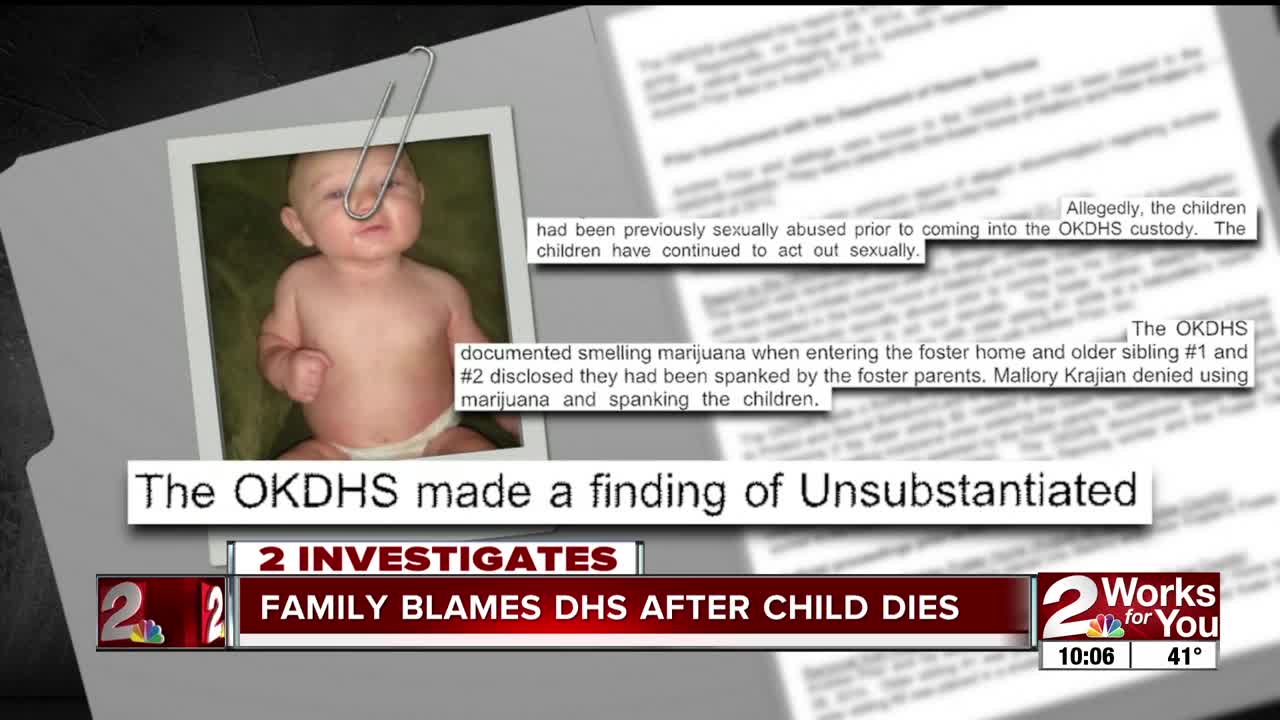 TULSA — An Oklahoma family claims negligence by the Oklahoma Department of Human Services.

They tell 2 Works For You the agency’s actions led to the death of a 3-year-old boy and the abuse of his siblings. Now with court cases dried up and no answers as to how the little boy died, they're devastated.

“Somebody needs to pay for what these little kids has gone through,” great aunt Lois Ritchie said.

His baby book is all Andrew Prior's family has to remember him by.

Andrew was 3 years old when he died in foster care in 2014. Richie and her sister Connie Hubbard are Andrew's great aunts. Both tried to get custody of Andrew and his siblings when they were put into foster care in 2013.

The children's biological parents were jailed on child neglect charges.

“DHS wouldn't even talk to us,” Richie said.

“I was in Missouri calling to come to get them and was turned down,” Hubbard said.

Family says they didn't understand why.

Hubbard was already a certified foster parent in Missouri.

Hubbard says she was confused but thought maybe the caseworker had a good reason.

Andrew's great aunt she told me that the children were in a very good foster home, they were seeing counselor which they really needed and that they had bonded with their counselor. Connie says she never was called about any problems and was not notified when Andrew died.

“They make their own rules, they do what they want to do,” Hubbard said. “And they feel like they have the authority and the power above you and there's nothing you can do.”

Richie and Hubbard say they were shocked to learn the details of Andrew's case.

According to a state oversight report, Andrew went to the hospital for a brain bleed due to head trauma and died a few days later. His foster mother, Mallory Kraijan, told DHS he fell off the couch. Kraijan was later charged with child abuse murder.

Leading up to Andrew's death, family says, there were warning signs, some even documented by DHS.

In two previous issues at the home, one involved inappropriate behavior between siblings. The other -- allegations of marijuana in the home and complaints by the kids of hitting and spanking. DHS determined those claims were unsubstantiated.

But after Andrew’s death, foster father Peter Kraijan pleaded no contest to child abuse by injury in an incident with Andrew's sister.

“For pulling her bald-headed,” Hubbard said. “When I got her, that baby on one side of her head was totally bald. She was 4 years old.”

Richie and Hubbard say that alone proves the home wasn't safe and that DHS didn't do due diligence.

“They should have been removed right then and there on the spot,” Richie said. “But they didn’t. So yes, I do blame DHS for it.”

The family filed a wrongful death lawsuit last year, but it's since been dropped.

You can read the full report on Andrew Prior's death here.