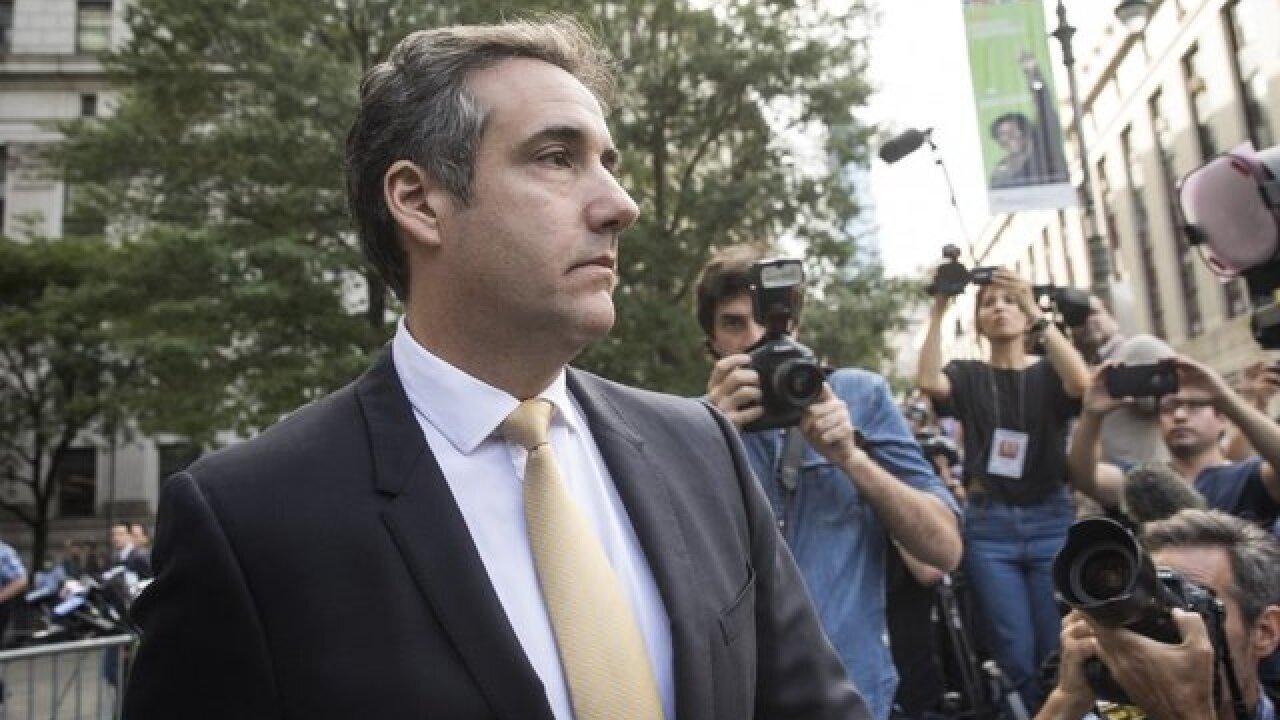 NEW YORK (AP) -- Michael Cohen, a lawyer who made his career protecting President Donald Trump, is set to learn Wednesday whether his decision to cooperate with federal investigators will lessen his punishment for crimes including making illegal hush-money payments to two women during the 2016 campaign -- a scandal that could damage Trump's presidency.

A federal judge in New York is set to decide whether Cohen gets leniency or years in prison for campaign finance violations, tax evasion and lying to Congress about the president's past business dealings in Russia.

Cohen, 52, is due to appear at 11 a.m. at a courthouse in Manhattan for a sentencing hearing before U.S. District Judge William Pauley III.

Under federal sentencing guidelines, he stands to get about four years in prison, but his lawyers have argued for leniency.

Some of Cohen's crimes, they said, were motivated by overenthusiasm for Trump, rather than any nefarious intent.

He has pleaded guilty to misleading Congress about his work on a proposal to build a Trump skyscraper in Moscow, hiding the fact that he continued to speak with Russians about the proposal well into the presidential campaign.

Cohen also pleaded guilty in August to breaking campaign finance laws by helping orchestrate payments to silence former Playboy model Karen McDougal and adult film actress Stormy Daniels, who said they had sexual encounters with Trump while he was married.

For weeks, Cohen's legal strategy appeared to revolve around persuading the court that he is a reformed man who abandoned longtime friendships and gave up his livelihood when he decided to cut ties with the president and speak with federal investigators. Cohen's lawyers have said in court filings that their client could have stayed on the president's side and angled himself for a presidential pardon.

New York prosecutors have urged a judge to sentence Cohen to a substantial prison term, saying he'd failed to fully cooperate and overstated his helpfulness.

They've asked for only a slight reduction to his sentence based on his work with the office of special counsel Robert Mueller and prosecutors looking into the campaign finance violations in New York.

A probation-only sentence, they said, is unbefitting of "a man who knowingly sought to undermine core institutions of our democracy."

"While many Americans who desired a particular outcome to the election knocked on doors, toiled at phone banks, or found any number of other legal ways to make their voices heard, Cohen sought to influence the election from the shadows. He did so by orchestrating secret and illegal payments to silence two women who otherwise would have made public their alleged extramarital affairs" with Trump, prosecutors wrote.

Trump, who insists the affairs never happened, said Monday in a tweet that the payments to the women were "a simple private transaction," not a campaign contribution. And if it was campaign contribution, the president said, Cohen is the one who should be held responsible.

"Lawyer's liability if he made a mistake, not me," Trump wrote, adding, "Cohen just trying to get his sentence reduced. WITCH HUNT!"

A sentence of hard time would leave Cohen with little to show for his decision to plead guilty, though experts said Wednesday's hearing might not be the last word on his punishment.

Cohen could have his sentence revisited if he strikes a deal with prosecutors in which he provides additional cooperation within a year of his sentence, said Michael J. Stern, a former federal prosecutor in Detroit and Los Angeles.

"Few things spark a defendant's renewed interest in cooperating faster than trading in a pair of custom Italian trousers for an off-the-rack orange jump suit," he said.

Annemarie McAvoy, a former federal prosecutor in Brooklyn, said prosecutors appear to be angry at Cohen for limiting his cooperation.

"It could be a tactic to try to break him like they've tried to do with (Paul) Manafort," McAvoy said, referring to Trump's former campaign chairman. "It kind of shows they're putting the screws to him. If they're not mad at him, he didn't give them what they wanted."

Cohen's transition from Trump's fixer-in-chief to felon has been head-spinning.

He once told an interviewer he would "take a bullet" for Trump. But facing prosecution for evading $1.4 million in taxes, Cohen pleaded guilty in August, pledged to cooperate with Mueller's investigation of Russian interference in the presidential election and changed his party registration from Republican to Democrat.

Judge Pauley, who was appointed to the federal bench by former President Bill Clinton, may allow Cohen to begin serving any prison term he receives at a later date. But legal experts said Cohen could also be taken into custody immediately.

"If I were advising him, I'd encourage him to bring his toothbrush to court," said Stern.

Cohen's lawyers have asked for no prison time, saying he has suffered enough already.

"The greatest punishment Michael has endured in the criminal process has been the shame and anxiety he feels daily from having subjected his family to the fallout from his case," his attorneys wrote in a court filing last month. "The media glare and intrusions on all of them, including his children, the regular hate correspondence and written and oral threats, the fact that he will lose his law license, the termination of business relationships by banks and insurers and the loss of friendships, are but some of this fallout."