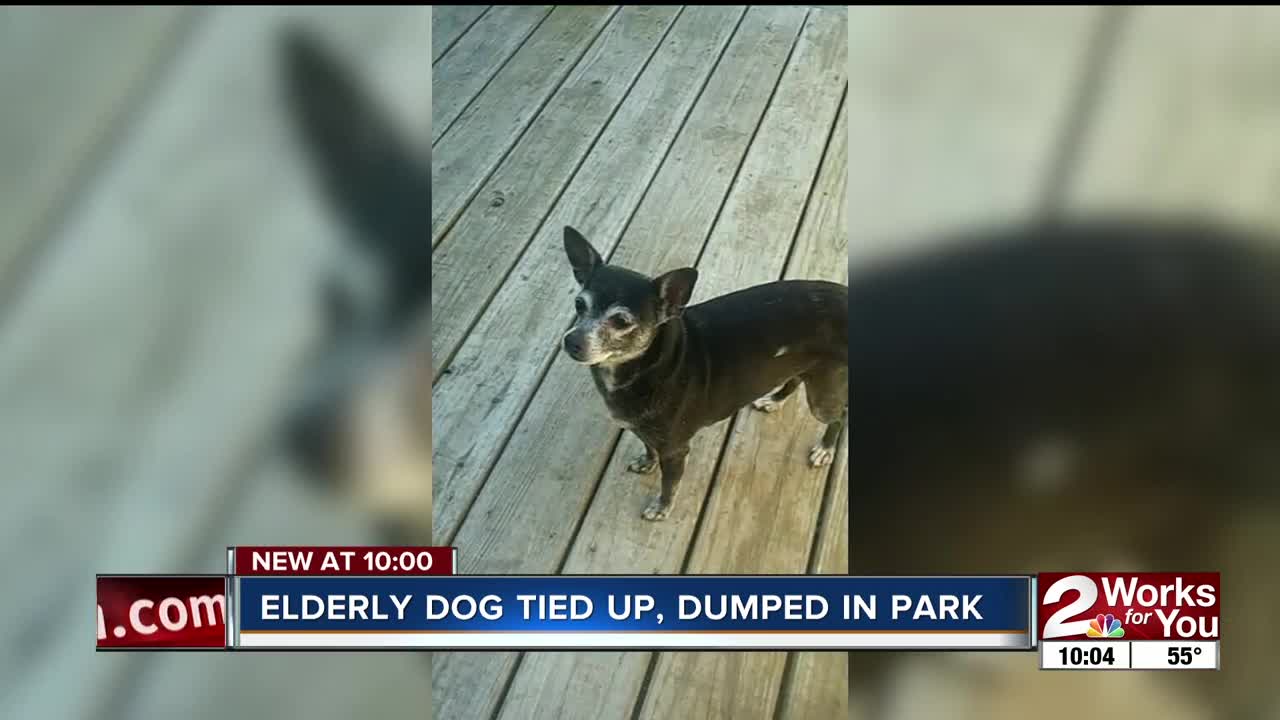 TULSA, Okla. — A $10,000 reward is now being offered for information leading to a conviction in the case of a dog found beaten and dumped at a Tulsa park.

The Oklahoma Alliance for Animals offered a $5,000 reward early Friday, and an anonymous donor stepped forward to match that amount later in the day.

We first told you about the story on Thursday.

"All of the markings, everything is the same and you just know your dog,” Sue Turner said. “And it was Gracie."

An elderly dog, taken from her yard, beaten and dumped in a South Tulsa park. You may be able to help.

But we want to warn you, some of the images are disturbing.

It's the kind of park where moms take their children to play.

Heller Park is a quiet place, until this morning, when David Woodruff spotted a dog in the drainage ditch.

“It had blood coming out of the ears… and it looked like the legs were tied with a [zip tie],” Woodruff said. “It was a horrible sight."

David's friend Sandra Rodriguez climbed down to get the dog because he has back problems.

"If they are going to get rid of an animal they don't care about - all I can see is they threw it off the bridge and down there," Rodriguez said.

She called police and animal control, which took the body.

Why did someone torture an old dog?

“Maybe someone seen something," Woodruff said.

They spread the word - by phone and Facebook... trying to find the dog's owner.

"Someone had to have taken her."

It wasn't long before Sue Turner realized -- it was her little Gracie.

"That she suffered before she died since whoever it was beat her in the head…” Turner said as she cried.

“This animal was found in a creek bed,” Tulsa animal welfare manager Jean Letcher said. “We don't have any suspects in this case."

“And hopefully find the person that did this,” Woodruff said. “[Someone] has to know something.”

Their hearts ache for the old dog whose life ended so badly and for the woman who grieves for her companion.

"It's like losing a child. and I just hope they catch whoever did this. (sniffs)"

The city told us no formal report has been filed yet, though Sandra spoke with an investigator.

Letcher says if something is an active case of cruelty, you need to call police.

If you suspect cruelty, call animal welfare 918-596-8000 and press option 6 for dispatcher. They will send an investigator to look into the tip.

If they find evidence, they will file a felony abuse case with the district attorney’s office.

According to the city, the solid waste crews scan garbage for microchip IDs to check for the remains of animals.