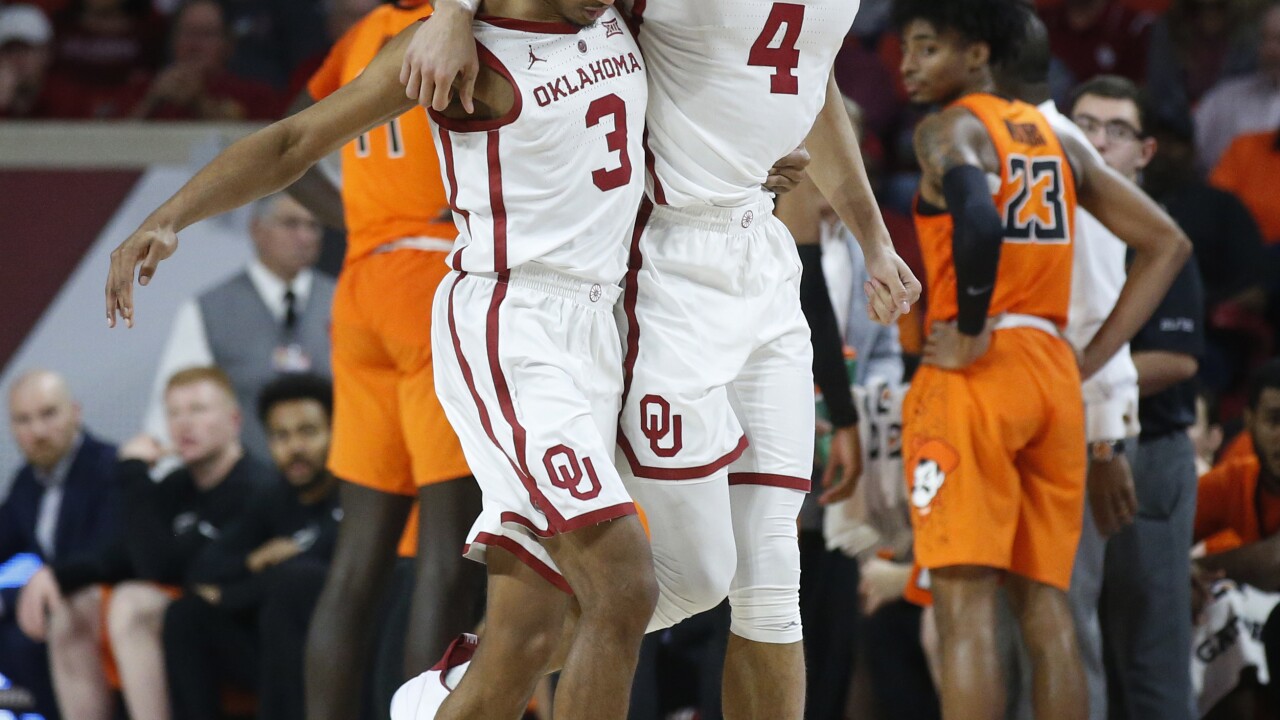 Sue Ogrocki/AP
Oklahoma center Jamuni McNeace (4) is helped off the court by teammate guard Miles Reynolds (3) after a fall in the second half of an NCAA college basketball game against Oklahoma State in Norman, Okla., Saturday, Jan. 5, 2019. (AP Photo/Sue Ogrocki)

NORMAN, Okla. (AP) -- Oklahoma's defense showed up as usual, and it did just enough on the other end.

Kristian Doolittle had 16 points and eight rebounds, and No. 23 Oklahoma beat Oklahoma State 74-64 on Saturday.

Oklahoma State, which entered the day leading the Big 12 in 3-point percentage at 39 percent, went 6 of 26 from long range. The Cowboys shot just 34 percent overall.

"If we didn't stop them, we would have been blown out because we were having trouble getting the ball to go down," Doolittle said. "But we were able to disrupt their shooters, run them off the 3-point line -- basically everything we had planned on doing going into the game. We did a good job executing our defense."

"It was really a good win," coach Lon Kruger said. "About midway through the first half, you knew it was going be a grind either way. Points were hard to come by."

It might have been a costly victory for the Sooners. Center Jamuni McNeace, who has missed much of the season with a right ankle injury, left in the second half after coming down hard on his ankle.

There was a minor scuffle involving Oklahoma's Miles Reynolds and Oklahoma State's Cameron McGriff as they battled for a rebound in the first half. The play was reviewed, and both were called for fouls -- a technical for Reynolds and a personal on McGriff.

The score was tied at 25 before Oklahoma closed strong and took a 38-32 lead into the break.

Oklahoma led by double digits early in the second half, but Oklahoma State rallied and pulled within one on a basket by Isaac Likekele. Oklahoma regained control late, and two dunks by Manek put the Sooners up 64-58 with four minutes to play.

"Our lack of discipline on defense at times was very, very disappointing," Oklahoma State coach Mike Boynton said. "We left the ground and fouled guys when we were in pretty good defensive position."

"Youth is not an excuse anymore," he said. "We've played enough ballgames. I think it just comes down to guys really digging in and competing and everyone doing their job. We're at a crossroads where we either have to choose to stay focused and everything, or not. We've just got to continue doing our job and going to practice and getting better."

Oklahoma State: The Cowboys are scrappy, but they don't quite have the experience to close. They only led for 15 seconds, despite being close for much of the game. The Cowboys also gave Iowa State a game on Wednesday before dropping a 69-63 decision.

Oklahoma: The Sooners showed they could win when they don't shoot well -- they only made 36 percent of their field goals.

"Oklahoma State did a really good job of mixing things up defensively and kept us out of rhythm, and we didn't handle that as well as we'd like to," Kruger said. "But I'm proud of the guys' effort."

Oklahoma dominated the boards 51-39 and outscored the Cowboys 25-14 from the free-throw line.

"I thought it was a hard-fought, tough, Big 12 basketball game with runs by both teams," Boynton said. "They made a couple more runs than we did. Obviously, kicked our tail on the glass, and we've got to figure out how to rebound better."

Oklahoma: At Texas Tech on Tuesday.