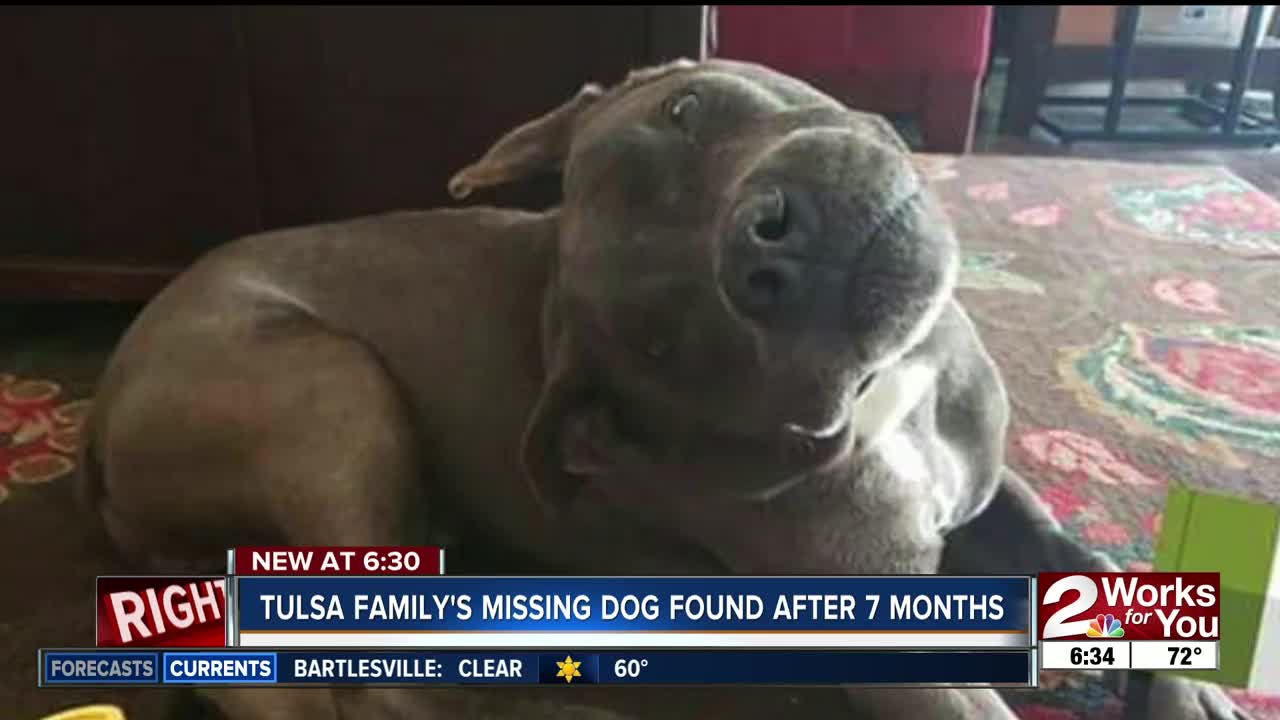 TULSA — A Tulsa family is reunited with their beloved dog after seven months of uncertainty.

The dog, Kratos, went missing last Christmas. He disappeared into the cold without a trace, leaving the family heartbroken. But, thanks to a peculiar social media post, a miraculous discovery would come over half a year later.

The Mccaskill family describes Kratos as loving, goofy, and cuddly.

The pit bull broke the stereotypes of its breed. For nearly ten years, he brought the Mccaskill family so much joy, until one day in December that joy went missing.

"He didn't come back inside from going out to use the bathroom,” Mccaskill said.

Kratos' family is unsure how he was able to escape a gated yard, but one thing was for certain, he was gone and didn’t appear to be coming back.

"We all looked for him since December,” Mccaskill said. “We were sad.”

After several months, the search efforts failed, and the family began praying.

Seven months passed and still no Kratos. However, on a day in late July, a social media post on Animal Aid of Tulsa's Facebook page alerted the family to something odd.

"[A] friend had posted a video of this dog that had three legs,” Mccaskill said. “She said it looked like [Kratos,] but this dog has three legs."

The dog’s name was listed as Walter, so the family called Animal Aid asking them to try the name "Kratos.”

"They said, Kratos come here, Kratos! And she goes, ‘Oh my gosh that’s his name!’"

Kelly brown, animal care and rescue coordinator, said she knew in that moment they were destined to find Kratos.

"It was very obvious to us that he was loved by somebody,” Brown said.

She said they found Kratos back in February. His leg was broken after he fell from a retaining wall along the highway.

"That first couple of months we had a temporary pin in that leg,” Brown said.

Krato’s body rejected the pin and doctors had to amputate. The dog also had a strange tilt to his head, something doctors said they are working to figure out a cause.

Staff at the rescue continued treatment on Kratos during his entire stay at the shelter. The dog became a rescue favorite, and when they learned Kratos had a family after all this time, they were thrilled.

"Regardless of what happened, who cares about that part, he's back home with his mommy and he's going to be loved,” Brown said.

Kratos is now adjusting to life back home after quite the journey. His recovery continues in the comfort of his own home with his loving family.