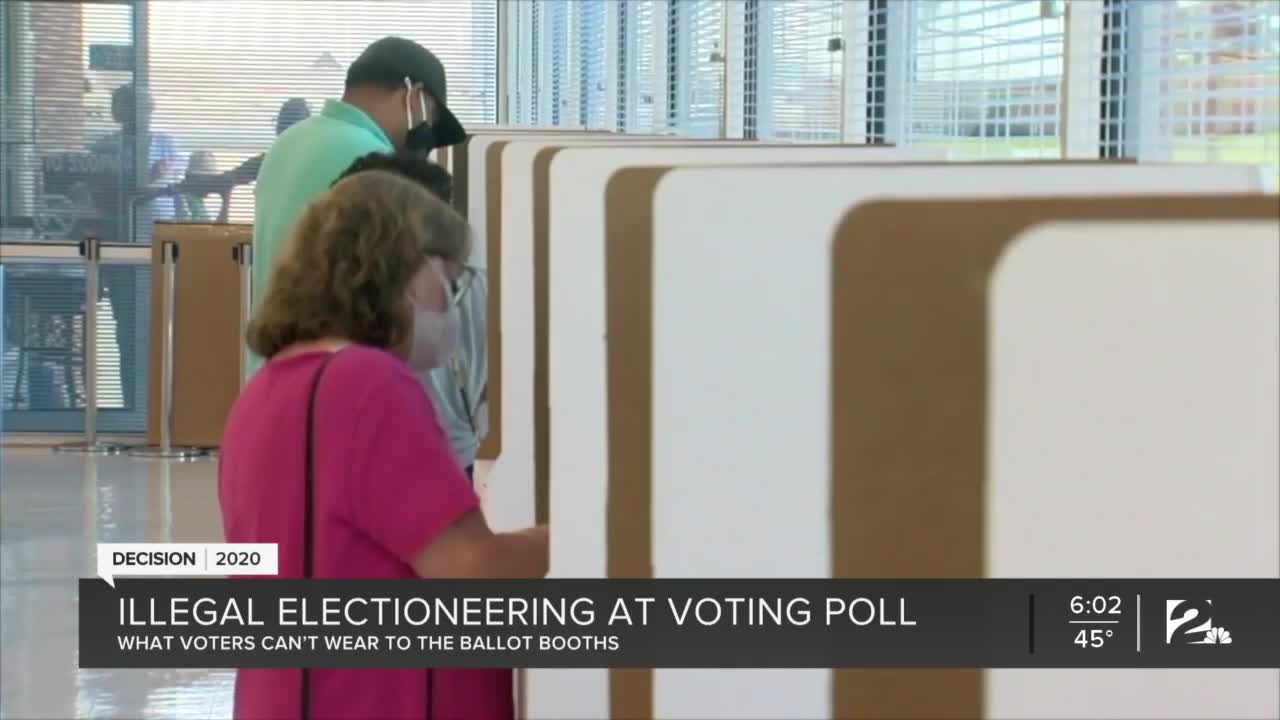 TULSA, Okla. — Early in-person voting for Oklahomans begins in less than a week on Thursday, Oct. 29. It is important for voters to know where and when to show up, but what they arrive in is just as important.

"Most people don't realize that it is a law and when they come in with a hat or a T-shirt, it's an honest mistake," said Sgt. Ernie Mendenhall with the Tulsa County Sheriff's Office.

Sgt. Mendenhall is one of many TCSO deputies who will be on-duty at ONEOK Field for early voting in Tulsa County. He and his fellow officers watch out for illegal election activity, but it is not always to spot. It could be as simple as the stitching on a shirt.

"It happens all the time and that's why it's so important that people know that when they turn out to the polls on Election Day, they need to be careful about how they dress and what it is that they bring with them," Dr. Matt Motta, a political science professor at Oklahoma State University, said.

Electioneering law prohibits any voter from coming near a polling place sporting printed material in support of a certain candidate, political party, or ballot measure.

In Oklahoma, electioneering prohibits campaign displaying within 300 feet of a polling place.

"When you get to that 300-foot mark when you go into cast your vote you can't wear things that support a specific candidate," Sgt. Mendenhall said.

Dr. Motta said the law covers any unambiguous prints of public support. He said that can be a sign, button, or printed letters on clothing.

What is not covered clearly under electioneering law, Dr. Motta said, is verbal votes of confidence for a candidate.

"Doing something like playing an audio recording or speaking over a megaphone...those things, at least here in Oklahoma, are theoretically fair game," Dr. Motta said.

Sgt. Mendenhall told 2 Works for You, TCSO will have a barrier set up on Elgin Ave. about 300 feet from ONEOK Field's main gate. He said it will give voters an idea of where that legal line is.

Visit our Election Guide for dates and times on early voting at ONEOK Field.