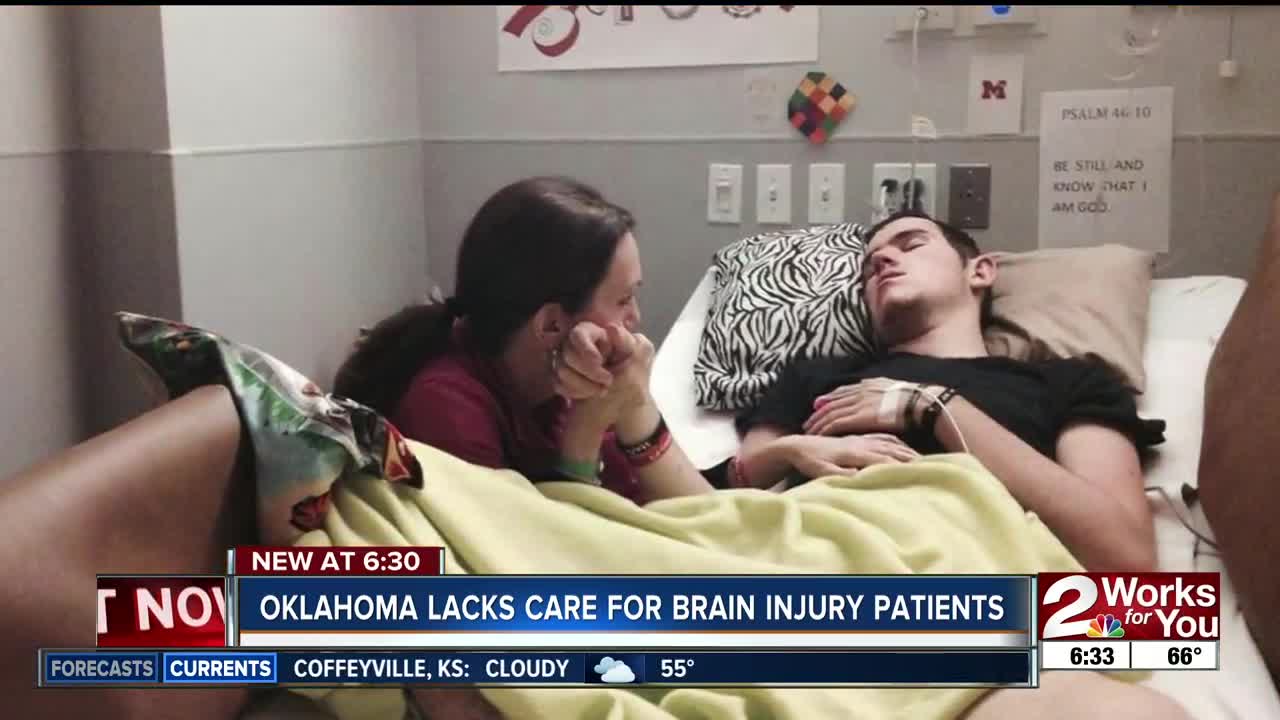 TULSA — Many Oklahomans who suffer traumatic brain injuries are finding there are not adequate recovery options for them in the state.

One in five people are affected by a brain injury, but not everyone has the adequate care they need to survive in their own state.

Six years ago, Christian Mayberry was a freshman in high school. Then, his life changed forever when he was riding on an ATV with someone who was drunk.

He said, “It crashed because of (the driver), and I flew off and hit the ground severely hard. My entire brain was injured.”

Christian suffered a traumatic brain injury. His mom, Kim Mayberry, said, “As a parent, you just can’t even believe you’re in the middle of it. It’s your worst nightmare.”

Kim was told her son may not survive, and even if he did, he would probably never walk or talk or have any kind of life.

Christian bounced around local hospitals. Doctors kept asking the family where they were going to go from there, but they found there was nowhere for Christian to go but a nursing home for him to live out the rest of his days.

Kim even got lawmakers involved, but the answer was always: there is nothing more any medical facility in Oklahoma can do for Christian.

They Mayberrys went to Florida for recovery healthcare, where Christian had to learn how to walk, talk, and defy doctors’ expectations.

It was all thanks to a mother’s desperate search for help to save her son’s life. Kim Mayberry said, “A family shouldn’t have to go through that. They should have plenty of options right here in their own home state.”

That’s where Chris Lieberman comes in, who had a similar experience when he fell off a ladder. Lieberman said, “The doctors couldn’t guarantee I was going to survive. I don’t remember how they put it. Luckily, I don’t remember any time in the hospital.”

He started traveling to Dallas every week for over eight months. Chris, with his fiancée, Kim Hahn, knew something had to change.

Hahn said, “Having facilities like this in Oklahoma and our programs will be able to keep families together. Just imagine the expenses and the costs and the mental and emotional aspects that go into that. It’s exhausting.”

So, they developed the Brain Injury Recovery Foundation - with awareness programs, support groups, and a neuro rehabilitation center in the works. The couple says the center will have everything equipped to help people like Chris and Christian.

Lieberman explained, “(It will have) specialized equipment that they need and the trained therapists that understand what their problems are and how to help them recover. That’s something we don’t have in Oklahoma.”

And although Chris survived his injury, he doesn’t consider himself a miracle. But that doesn’t mean a miracle can’t come out of his experience.

He said, “If I’m able to do this and truly help other people, then that’s a miracle. And that would be fine. That’s not why I’m doing it, but I want to do it to do that for them.”

Kim Mayberry added, “I can’t imagine taking something like this on, but I thank god that they are.”

The Brain Recovery Foundation is holding a fundraiser on Saturday, November 23 at Cain’s Ballroom. They hope to raise the funds for their recovery center.