As student debt continues to grow, some wonder if college is worth the price of admission 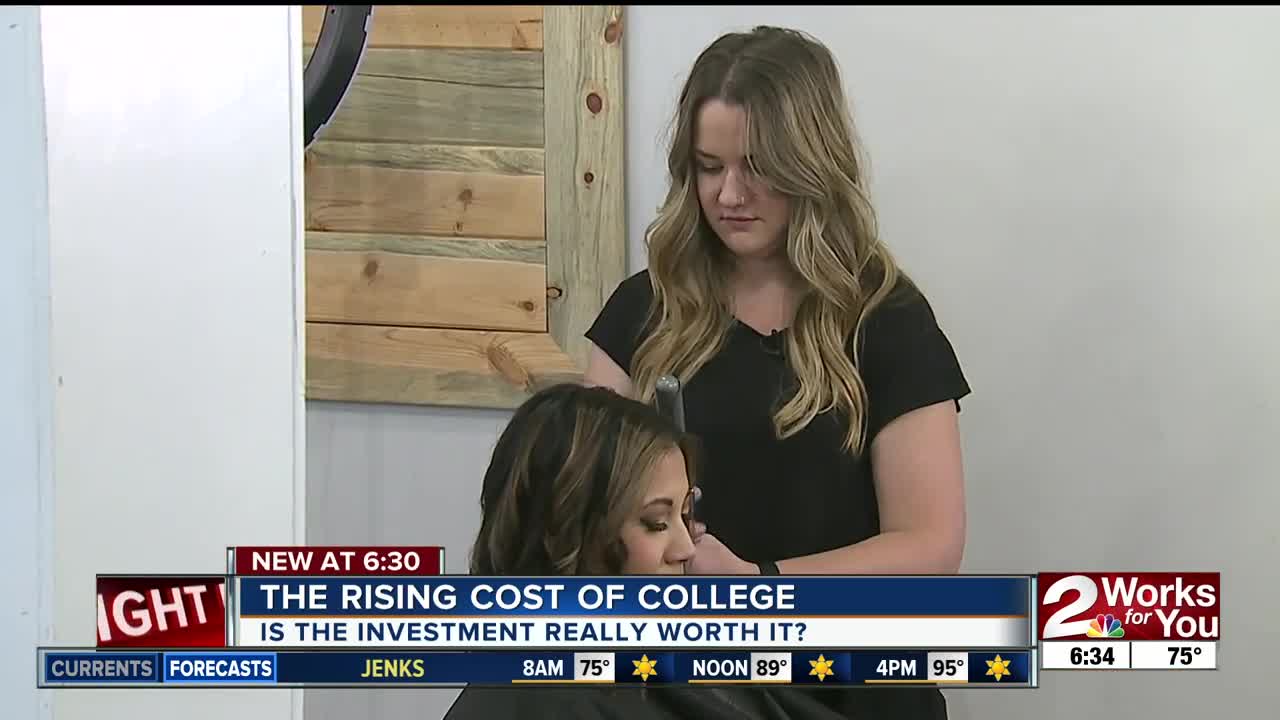 The cost of college continues to grow, but a new report from higher education officials found it's worth the investment.

At the same time, another recent study showed about one-fourth of young millennials are putting off college because it's too expensive.

Which begs the question, is college worth the price?

Hope Payne, 21, spends most of her days styling hair, and has no regrets about not going to a four-year college.

"I had to pay for school myself and the schools I was looking at were like $60,000 a year. That's not really an option for me," said Payne.

"Me and my husband are buying a house and I feel like most people my age, that's not even an option," said Payne.

Like many teens right out of high school, Payne said she didn't know what she wanted to do.

Instead of racking up debt on a degree she didn't know if she wanted, she went to a one-year cosmetology school.

"When I told people I was going to go to cosmetology school they were like, 'Well, why?' 'Well do you really think you'll be good at that?' 'Oh, you're just going to cut hair,'" said Payne.

Payne walked away with no debt and a job offer even before she got her certificate.

"People kind of look down on you about it, but now the same people who said those things to me are like, 'Wow, I can't believe how good you're doing,'" said Payne.

Army recruiter says there are other options

"College was not for me," said Army recruiter Mitchell Daughtery.

Daughtery enlisted right out of high school and now recruits other students to take his path.

"I can see there are a lot of kids today where they don't know what they want to do next and they think college is their correct step, but it's not always the step for them," he said.

The biggest reasons, from his perspective, for why teens should consider the military are it gives them more time to figure out what they want to do, provides hands-on life skills, and the military will pay for them to attend college debt-free.

"The greatest thing about the Army, for me, is that I got both of my degrees and I haven't paid a cent," said Daughtery.

For those who already have debt, the Army is offering a $65,000 signing bonus to help them pay it off.

"The messaging is you have to go to college. College isn't the end-all, be-all; there are so many things I can do and different ways I can go about my career," Daughtery explained.

Higher education officials say college is worth the investment

Outside of her obvious bias, Dr. Paccione said college is worth the investment and points to a recent return-on-investment report conducted by the state.

"When you think about a car, you might spend $30,000 to get a car. As soon as you drive it off the lot, it depreciates. With higher education, when you get that degree it actually appreciates," said Dr. Paccione.

She said high schoolers don't have to go to a four-year college. What's important is to get some form of additional education after high school.

"The good jobs require a credential. Find the one that works for you but don't stay out of the arena." said Dr. Paccione.

No matter which path someone choses — college, trade, or community — her biggest message is finish what you start at all costs.

But let's be frank.

There are professions that require at the very least a four-year degree. Aspiring cardio surgeon Ruby Odeymi falls into this category.

Odeymi is currently getting her undergraduate in nursing with plans of attending medical school.

"My mom always says short-term discomfort for long-term benefit, so yes, college is worth it," she said.

For her, college is absolutely worth the sticker price because it's really her only way.

"Anything that you do pertaining to the medical field, you're going to have to go to school," said Odeymi.

"I just thought that if I went to college, I'd probably get a better-paying job," said Cameron Kuhr.

"I feel like it's kind of expected of myself and expected to just make it in the word," said Liliana Paici.