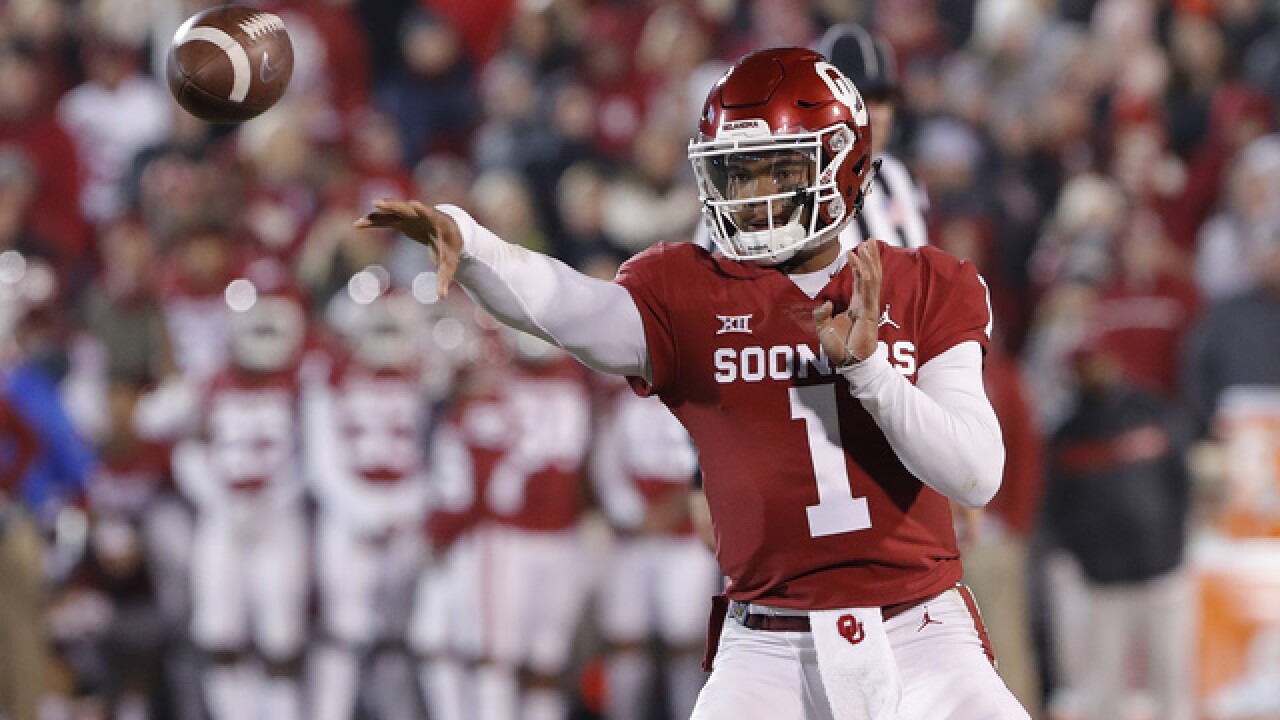 The Buckeyes surged to No. 6 in The Associated Press college football poll on Sunday on the strength of a record-breaking blowout of Michigan the day before. The College Football Playoff selection committee will weigh in Tuesday when its latest rankings come out. Michigan came into the weekend No. 4 in both the AP and CFP rankings, so beating the Wolverines so convincingly is significant.

TCU coach Gary Patterson has faced both the Sooners and Buckeyes this season. The Horned Frogs lost 40-28 to Ohio State in September at AT&T Stadium in Arlington, Texas. They lost 52-27 at home to Oklahoma a month later when they were a banged up team. After TCU managed to get bowl eligible by beating Oklahoma State on Saturday night in Fort Worth, Patterson took to defending the Big 12 and backing the Sooners.

"I can tell you this much, having been a defensive guy in this league I'm looking forward to everyone else defending them instead of me," Patterson said of the Sooners. "All I'm saying is, I'm a coach, I just watch. I played Ohio State. I saw what they did to Michigan today. I'm telling you, I played both. I know who I would rather play again. And who I wouldn't."

He added: "They're both good football teams. Just so now my Twitter feed can get hammered all night."

Heat Check has Ohio State-Oklahoma as close to a toss-up and still believes Missouri is getting overlooked and, as usual, would like to see voters reward more non-Power Five teams with those final five places.

Next: vs. No. 5 Georgia, SEC championship.

According to research from CBS Sports , the Tide is the first team since Yale in 1888 to win each of its first 12 games by 20 points. Its toughest tests all lie ahead, but Alabama is working on the greatest season in college football history.

Next: vs. Pittsburgh, ACC championship

Coach Dabo Swinney went off on the idea that a 21-point victory against South Carolina was somehow not impressive enough. This is what comes with 42-4 over the last four seasons. Consider it a good problem.

Best assistant coach this season: How about offensive coordinator Chip Long, who helped the Irish go unbeaten with two starting quarterbacks, a rebuilt offense and their best running back missing the first four games.

Next: vs. No. 1 Alabama, SEC championship.

Since losing by 20 at LSU, the Bulldogs have won four games against Power Five opponents by an average of 19 points per game. They just might be as good as last year's group.

The Sooners' offense might be even better than Alabama's, averaging 8.92 yards per play, which would smash the FBS record of 8.58 held by 2006 Hawaii. You know the rest of the story.

Next: vs. No. 20 Northwestern, Big Ten championship.

Maybe the Buckeyes are peaking? Or maybe they'll slip right back into bad habits against Northwestern?

Next: vs. Memphis, AAC championship.

Heat Check is again tempted to just go with UCF over both Oklahoma and Ohio State, but doubts the selection committee will feel the same.

Is it possible for a Michigan season that includes maybe the most humiliating loss ever to Ohio State to be considered even a modest success?

Compare and contrast with Michigan and you'll see just how much winning a rivalry game will change a season. The Longhorns will play the Big 12 title game with house money.

Not that complicated: The Huskies beat Washington State every year because they have better players.

Feleipe Franks has thrown 23 touchdown passes, six interceptions and competed 58 percent of his passes. In the current era of high efficiency passing that's not great, but it is the best quarterback play the Gators have gotten since Tim Tebow.

One bad performance in the snow against a good secondary will probably cost QB Gardner Minshew a chance to be a Heisman Trophy finalist. Probably not fair.

Heat check: A touch to hot.

Sure the Tigers deserved better against A&M, but maybe they were due for some bad breaks after a season of mostly good fortune.

The offense surpassed the defense and kept the Nittany Lions relevant in 2018.

It's always toughest on teams like West Virginia to fall short of that special season because who knows when it will be in that position again.

With 22 tackles for loss, five sacks and two interceptions, LB Chase Hansen makes a good case for Pac-12 defensive player of the year.

It has been a great season for the Orange, considering where they have been in recent years, but their most impressive accomplishment was catching Clemson on an off day.

Next: vs. No. 25 Fresno State, Mountain West championship.

Playing most of their important games at home was a boon for the Broncos.

The Bulldogs smashed lesser teams with Alabama-esque force this season.

Next: vs. No. 10 Ohio State, Big Ten championship.

The Wildcats head to the Big Ten championship being outgained on the season by 21 yards per game.

The fine line between a hopeful season and the same old, same old for the Aggies was a seven-OT game at home in which a bunch of close calls went their way.

Next vs. Navy at Philadelphia, Saturday, Dec. 8.

The only team to hold Oklahoma under 30 points.

Next: at No. 19 Boise State, Mountain West championship.

The follow up for coach Jeff Tedford in season two with the Bulldogs has been even better than the debut.

Should be out: Syracuse and Northwestern; Should be in: Missouri and Appalachian State.