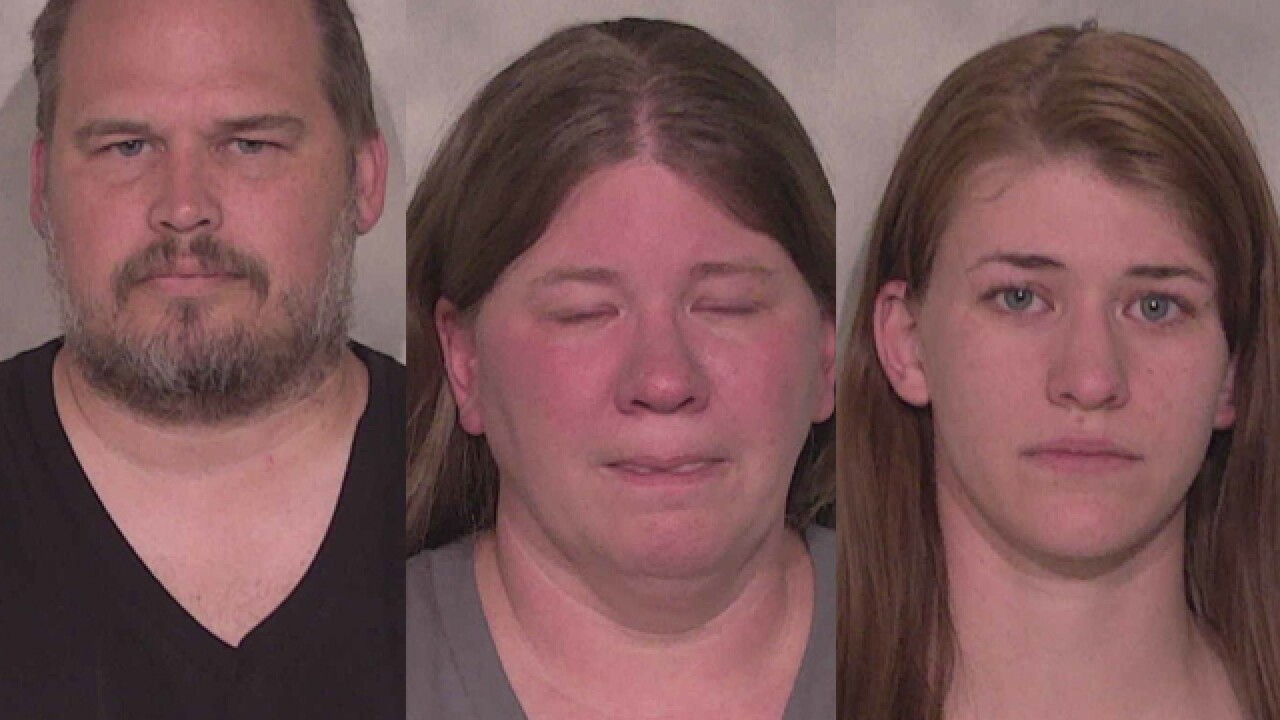 MAYES COUNTY, Okla. — A 9-year-old girl in Salina was found to be malnourished, made to wear a diaper, handcuffed at night, and said a livestock sorting stick was used to beat her, according to a probable cause affidavit.

Joel Richard Smith, 43, Amanda Irene Smith, 40, and Allison Elizabeth Ann Smith, 19, are being held at the Newton County Jail in Missouri and it is anticipated they will waive extradition and possibly be arraigned in Mayes County on Wednesday, the sheriff's office says.

A Mayes County deputy said she was en route to a missing child report earlier this month when she was diverted to a nearby address about a girl matching the same description. The girl was dirty, had unwashed hair, was wearing stained clothes, shoes with soles unattached and smelled like urine and feces, the deputy said.

“[The girl] became fearful with tears in her eyes when asked if she needed assistance back to her residence,” the affidavit says.

She told the deputy the adults in her home are mean to her, and when asked to elaborate, the little girl said they withhold meals, do not allow her to use a toilet and make her wear a diaper.

“[She] stated that she only gets one to two diapers a day, even if she soils herself,” the affidavit says.

The girl also showed the deputy a laceration on her leg, which was hot to the touch and appeared to be infected, according to investigators. The girl reportedly said the cut was caused by handcuffs her family would put on her and attach to a baby’s playpen so she won’t get up in the middle of the night.

When interviewed by child services, the girl told them she would get up in the middle of the night and eat moldy food and paper, and sometimes pet food because she was so hungry, the document states.

Further investigation showed the girl weighed less than she did at a doctor’s visit two years ago, with her arms “extremely small,” and her legs, feet and toes appearing jaundiced.

The deputy said she did a sweep of the home and saw the playpen and handcuffs on a dresser.

In other interviews, the 9-year-old also said she was not allowed to come inside the house during the day, no matter the weather, and she was made to pick up sticks, dig holes with her hands and move large rocks while outside, according to the document.

The family also claimed to have the girl in a homeschool program, but no one could name the specific program. The girl reportedly said she was given a “Leap Pad” for a learning program.

The little girl said the adults would beat her with various objects, including a livestock sorting stick, and she described being beaten with a broom on her head so hard it made her bleed because she had “counted her numbers wrong,” according to the affidavit.

Her family also would “grab her by the hair and threaten to kill her,” the affidavit says.

One of the adults would help the little girl take showers, but would turn the water on scalding hot or all the way cold, the document says. According to the girl, she was told to “die in a hole” and grabbed by the throat and choked frequently.

“[The girl] stated that she does not feel safe in her home… [and] reported that being safe to her means to find a new home and that she has felt that way for a very long time,” the affidavit says.

The arrest warrants issued this week for Joel Smith and Amanda Smith carry a $250,000 bond; the warrant for Allison Smith carries a $20,000 bond.

The child has been in protective custody since the day the investigation began, the affidavit says.