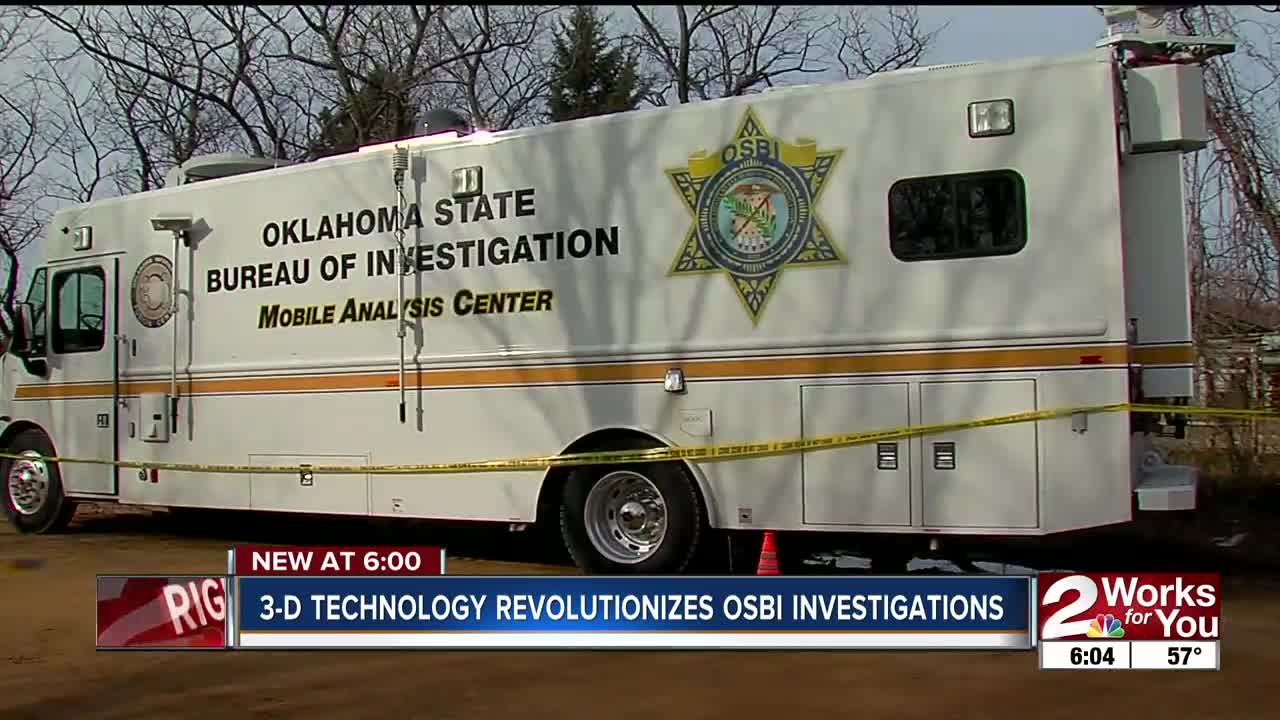 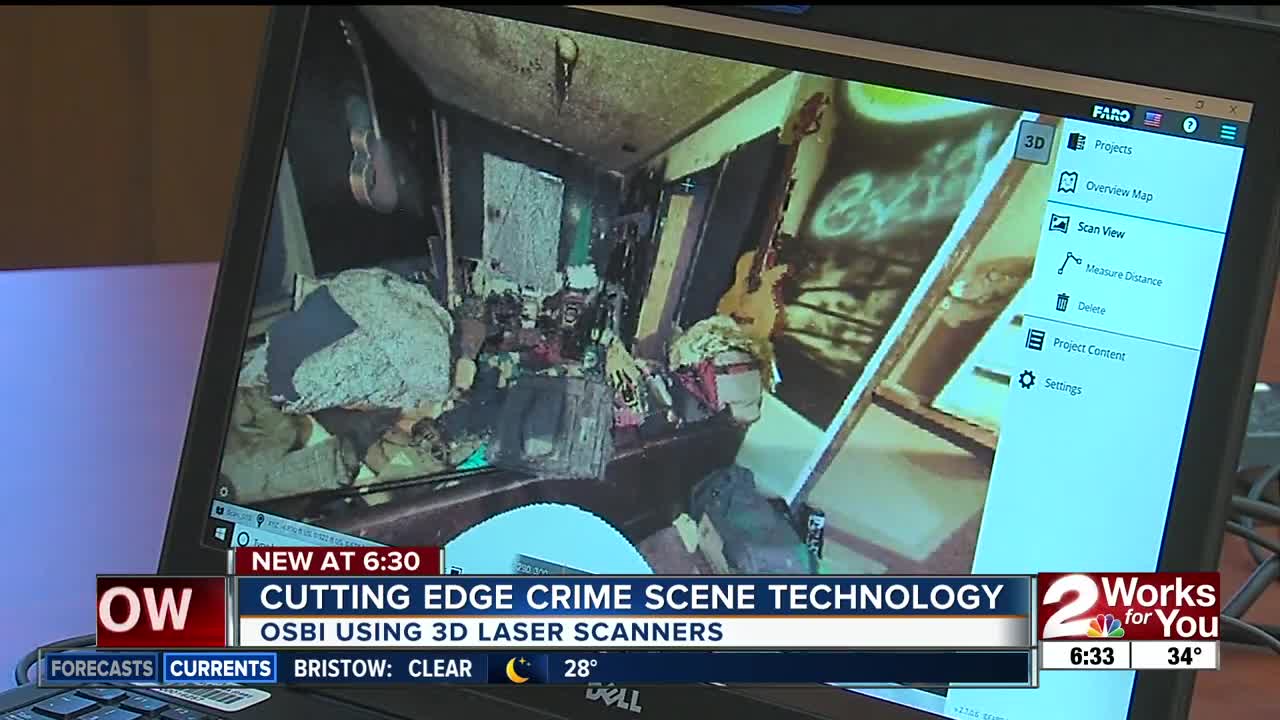 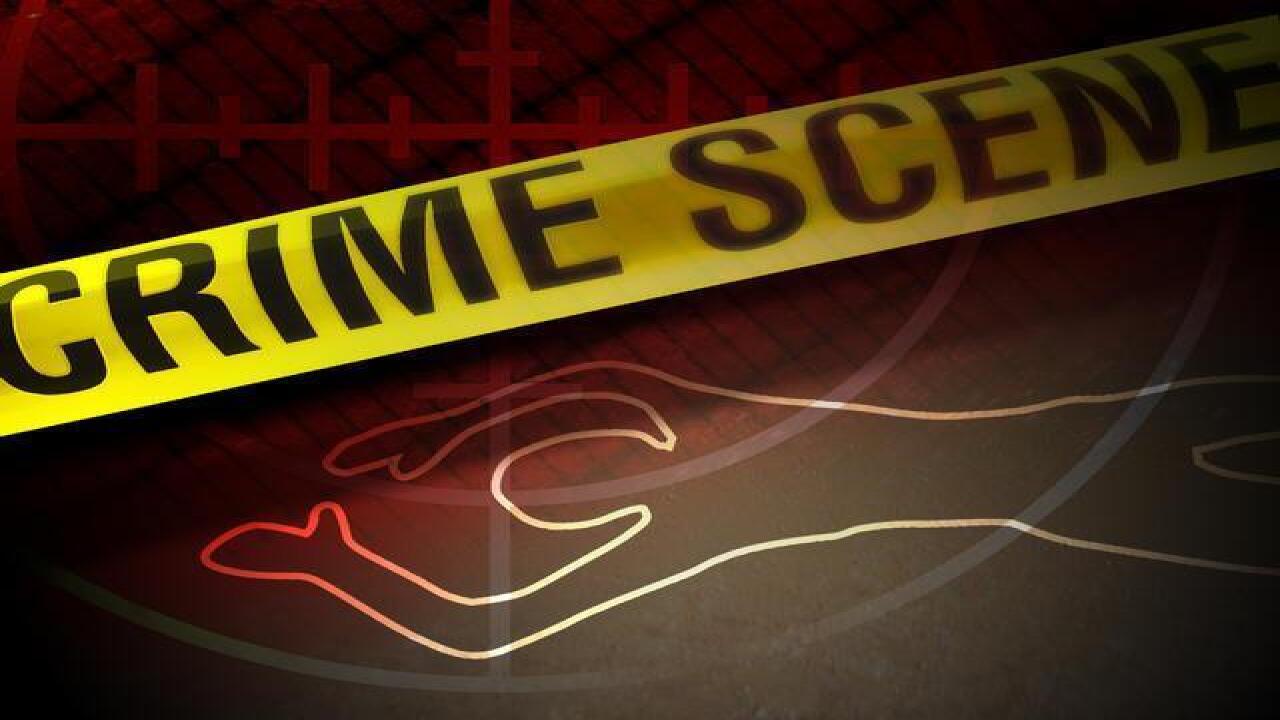 Imagine being able to look at a crime scene in 3D much like you would a video game or virtual reality.

It is the latest technology crime scene investigators with the Oklahoma State Bureau of Investigation have in their arsenal.

Law and Order,Chicago PD and Bluff City Law-- These shows are the closest thing to a crime scene or a courtroom most people ever get and they can be misleading.

Making the public believe things in police work are possible that simply, are not.

However, OSBI Agent Lt.Beth Green says 3D technology is helping to bridge the gap between what is possible and what people think is possible during crime scene analysis.

"I think it's something that's kind of helping overcome that CSI affect that we have to deal with." Says Lt. Beth Green with the OSBI.

Lt. Green is the agent behind the push for 3D laser scanners at the oklahoma state bureau of investigation.

She's been in law enforcement for nearly 20 years and when she heard about this technology she knew it would be revolutionary.

"This was something I had researched for years before we were able to actually purchase the instrument and get them out in the field."

OSBI Special Agent Ryan Wooley brought the 3D laser called a FARO to our studios in Brookside to show us how it works.

"You can take investigators, you can take jurors through later you can put people back into that scene. You can't do that with a photograph." says Special Agent Ryan Woolley with the OSBI.

The agency now has 12 scanners, enough for every crime scene investigator.

"The OSBI is the premiere investigative agency in the state of Oklahoma and these types of services are expected from us, as they should be, to provide to other law enforcement agencies and more importantly, to the citizens that are victims of crimes." says Lt. Beth Green.

According to the National Institute of Justice-- 3D laser technology is used by agencies all over the country.

The scanners have been used to investigate high profile crimes like the San Bernardino terror attack and the Southerland Springs church shooting.

Here in Oklahoma-- some of the first cases using this technology are finally making it to court.

Oklahoma hasn't had a case where the 3D scan was crucial in getting a conviction, Lt. Green thinks it's only a matter of time.

"I mean I certainly do believe that every victim deserves this level of work, and technology and this kind of perseverance and dedication from us." Says Lt. Green.

According to a study by the National Institute of Justice, 3D scanners have been shown to provide convictions in cases that may have otherwise gone unsolved.

That was the case in Omaha, Nebraska back in 2014 when a 5 year old girl shot in her home.

Investigators were able to get a conviction and say " without this technology, the outcome would have been unlikely."

"So this won't just get a few measurements of the room. This is going to get every measurement in the room. So this thing will scan 976,000 points per second." says Agent Woolley.

"So as the investigation develops as new information comes to light we're able to come in and in a 3 dimensional way, see, ok this is the distance between these which sometimes that relationship becomes critical in an investigation." says Lt. Green.

The 3D lasers run anywhere from 40 to 80 thousand dollars a piece.

Advances in investigations have come a long way with this new development and the OSBI is excited to see what could come next.

"The beauty of technology like this is as it continues to to advance and obviously overcomes some legal challenges to this but this is something that can be viewed through VR goggles so you could actually take somebody then and they're feeling like it in the court room through the virtual reality goggles and stuff like that so there's all kinds of upcoming things that can be done with technology like this." Says Lt. Green.

The ways this technology can be used are still being discovered and the hope is that the more investigators can do, the more they can prove.

Meaning-, more convictions and ultimately justice for the victims of crimes.