"We have finally found a mass grave": Archaeologists confirm they have a total of 12 individual burials in graves investigation 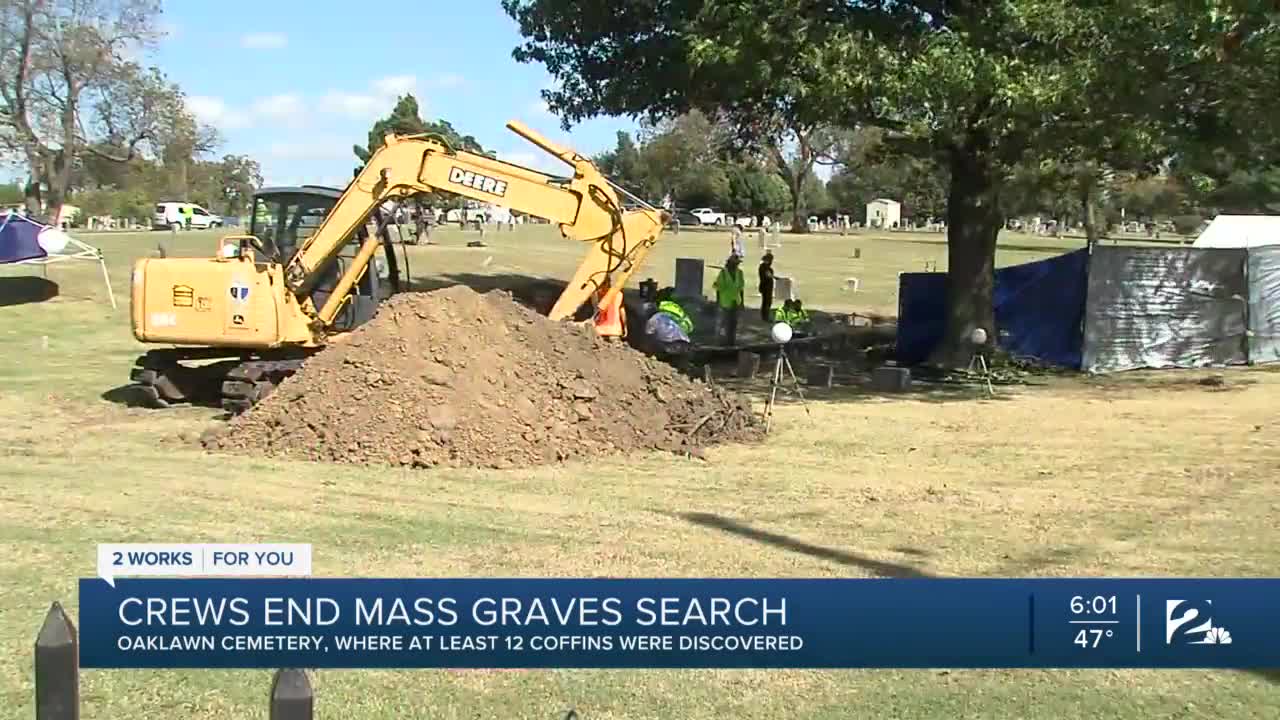 Crews end the investigation into what happened to the victims of the 1921 Tulsa Race Massacre. 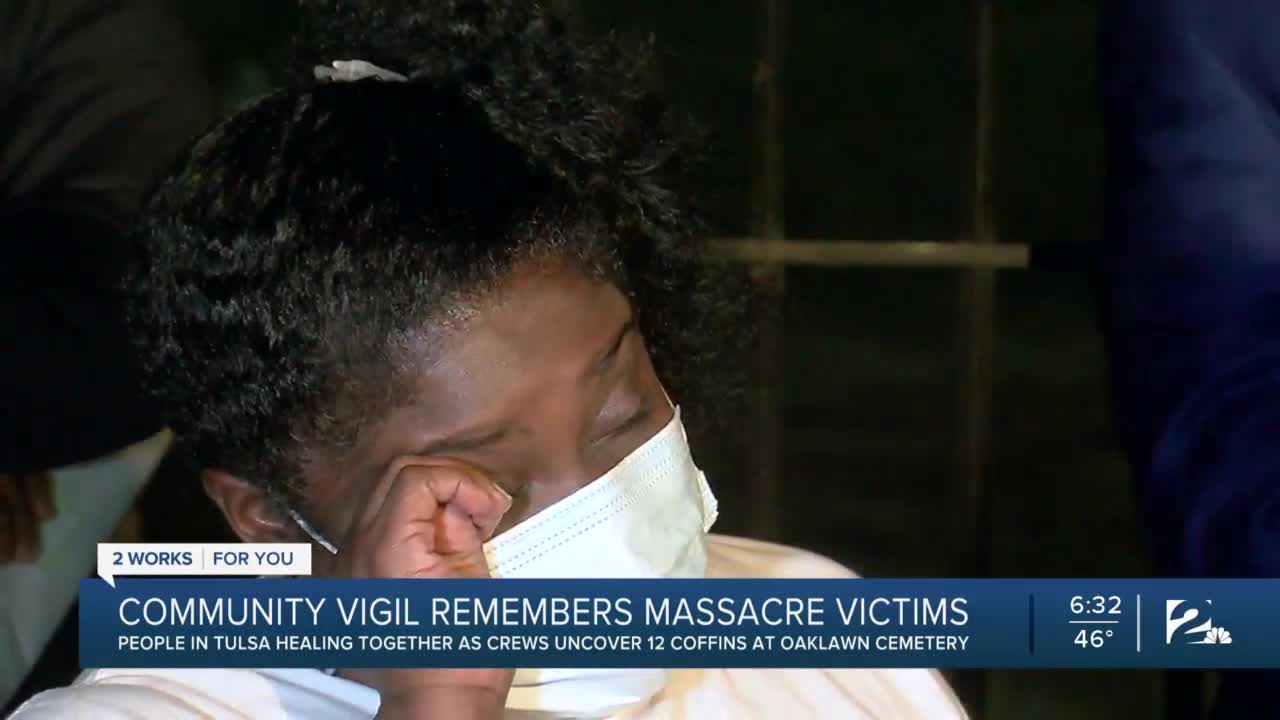 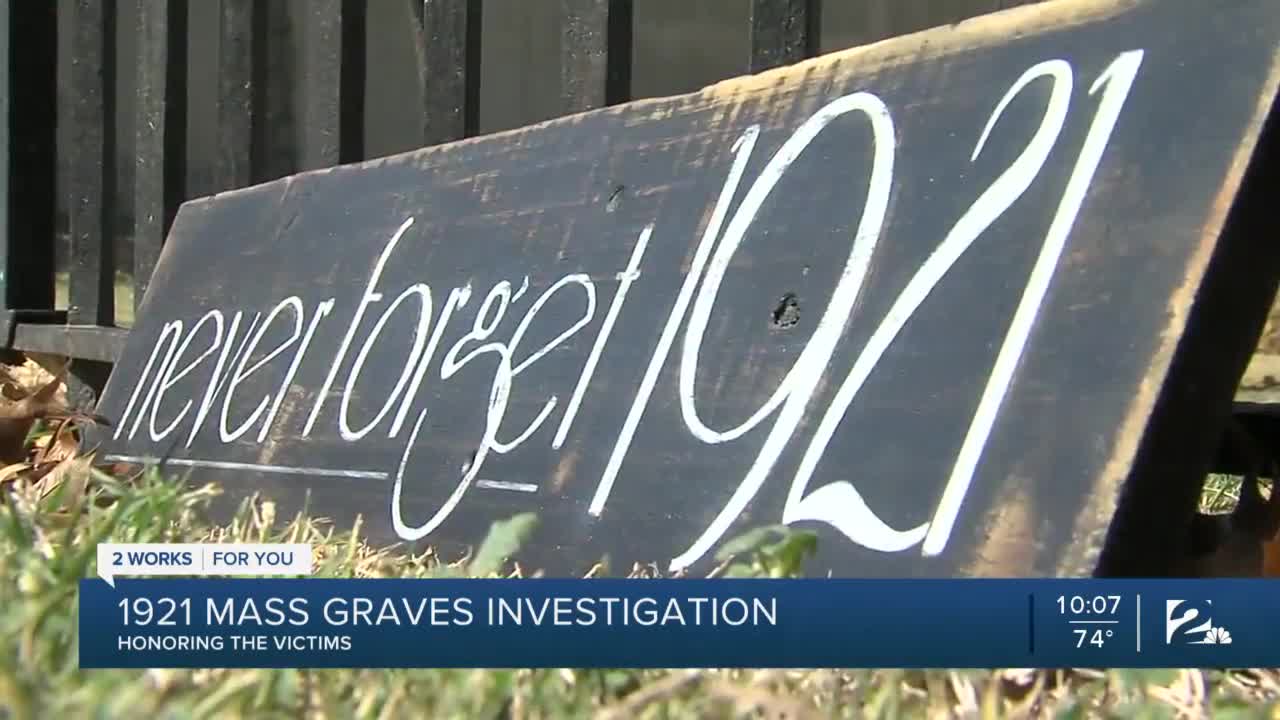 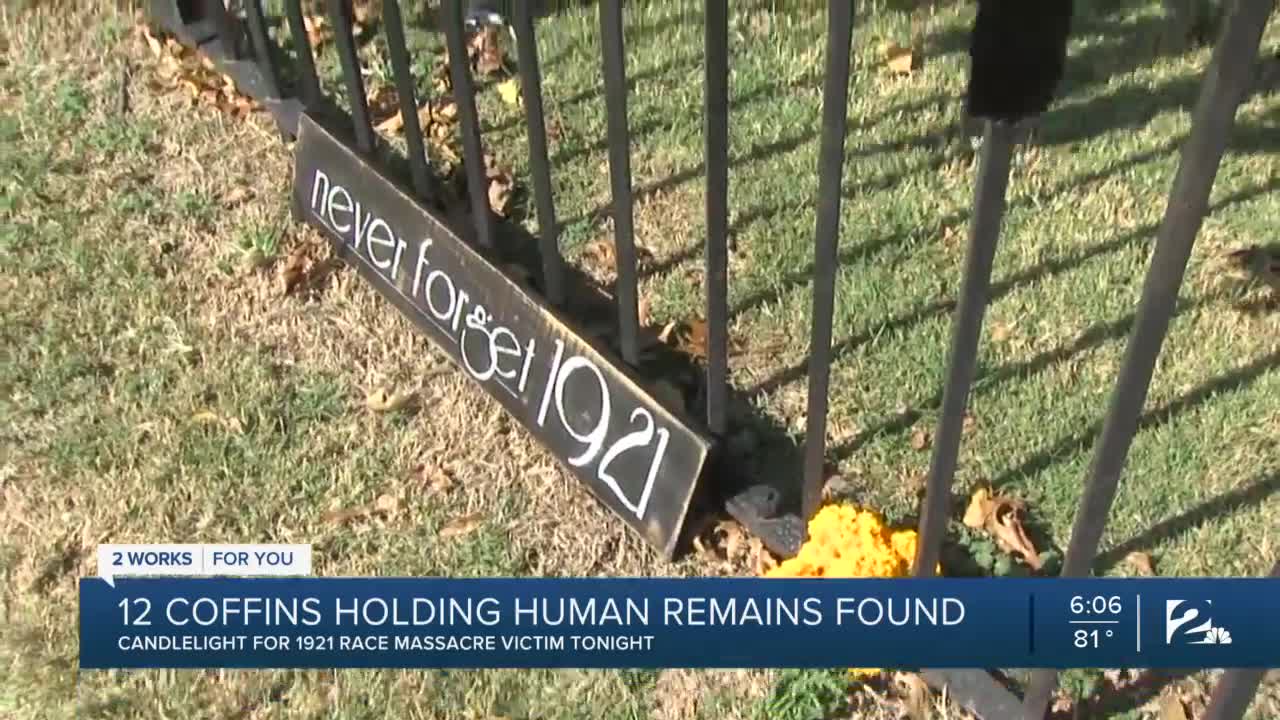 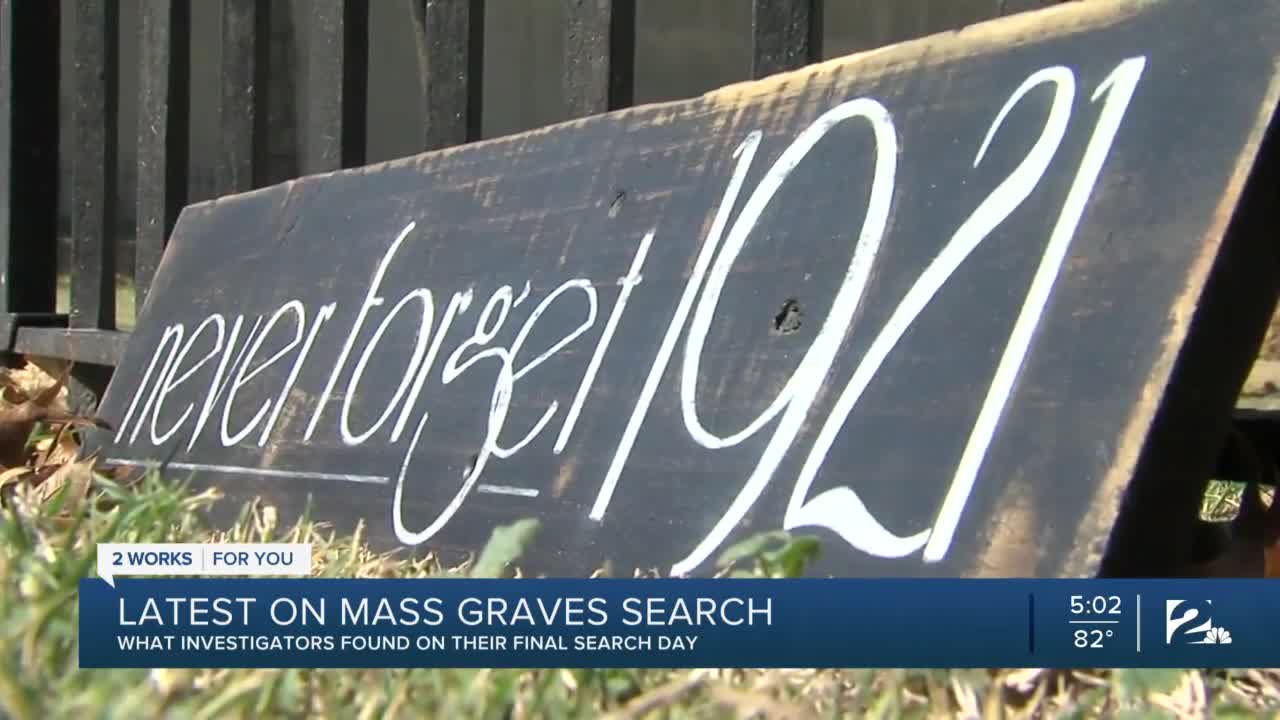 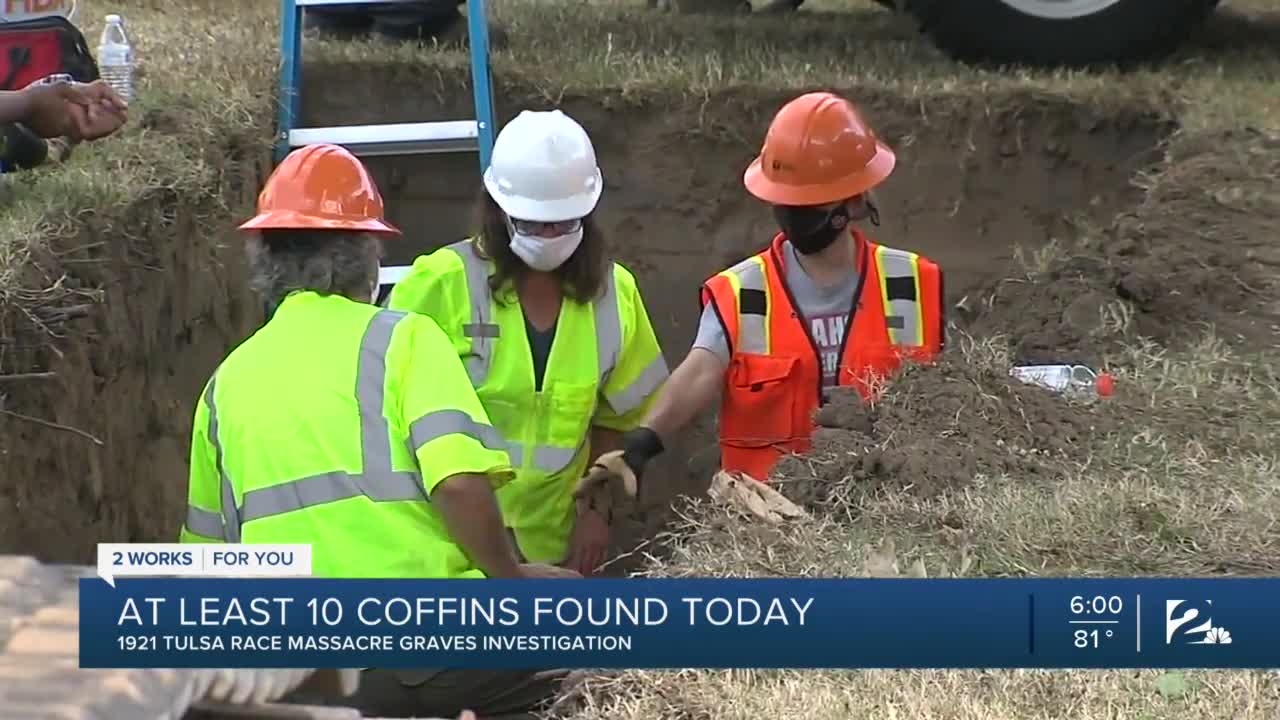 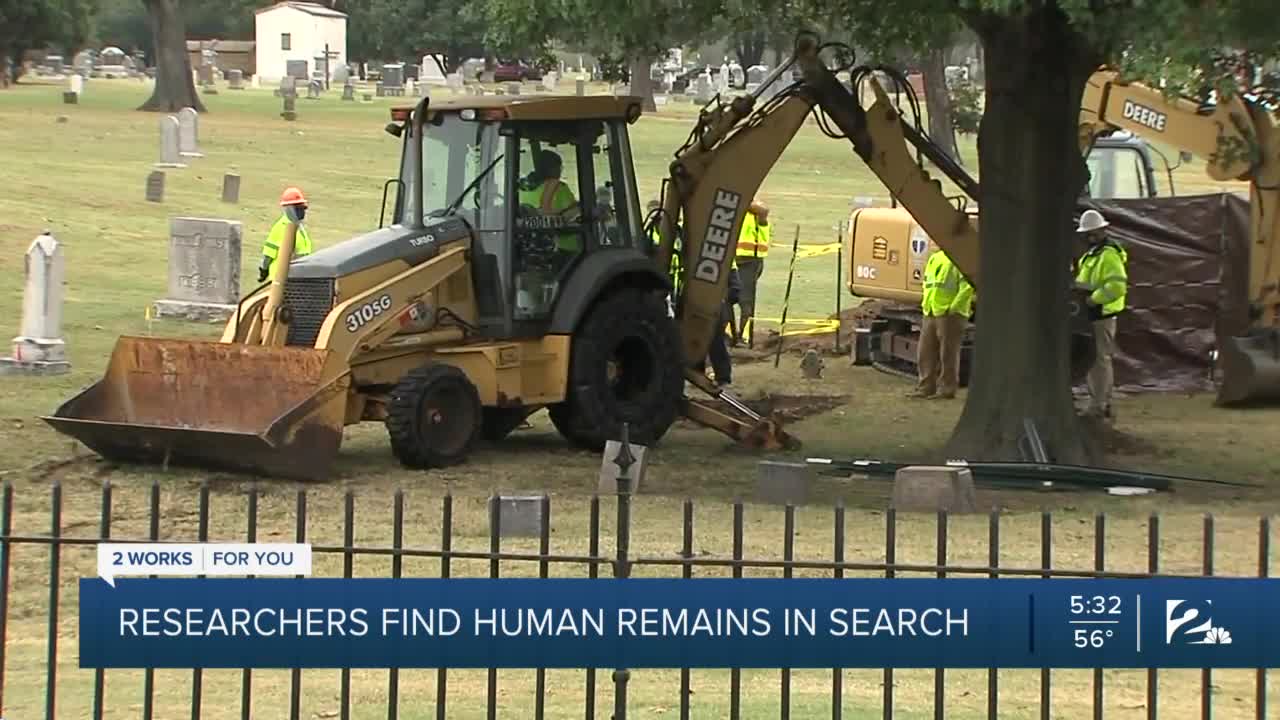 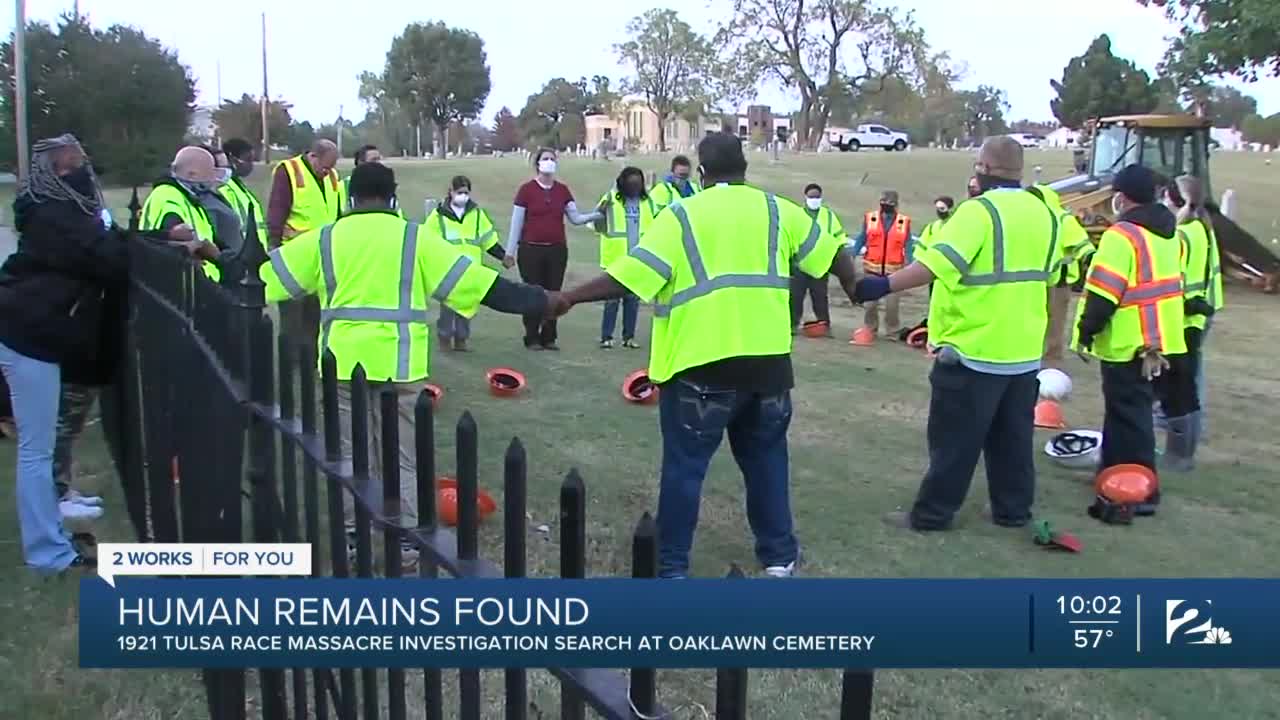 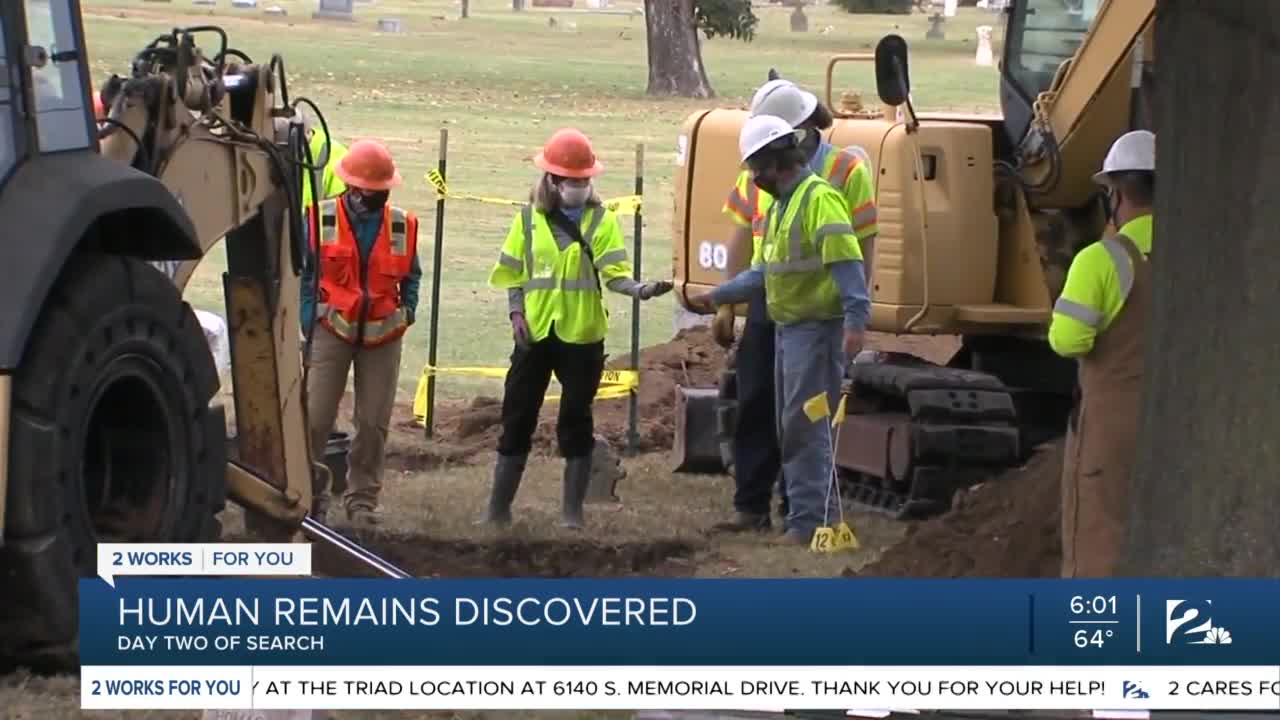 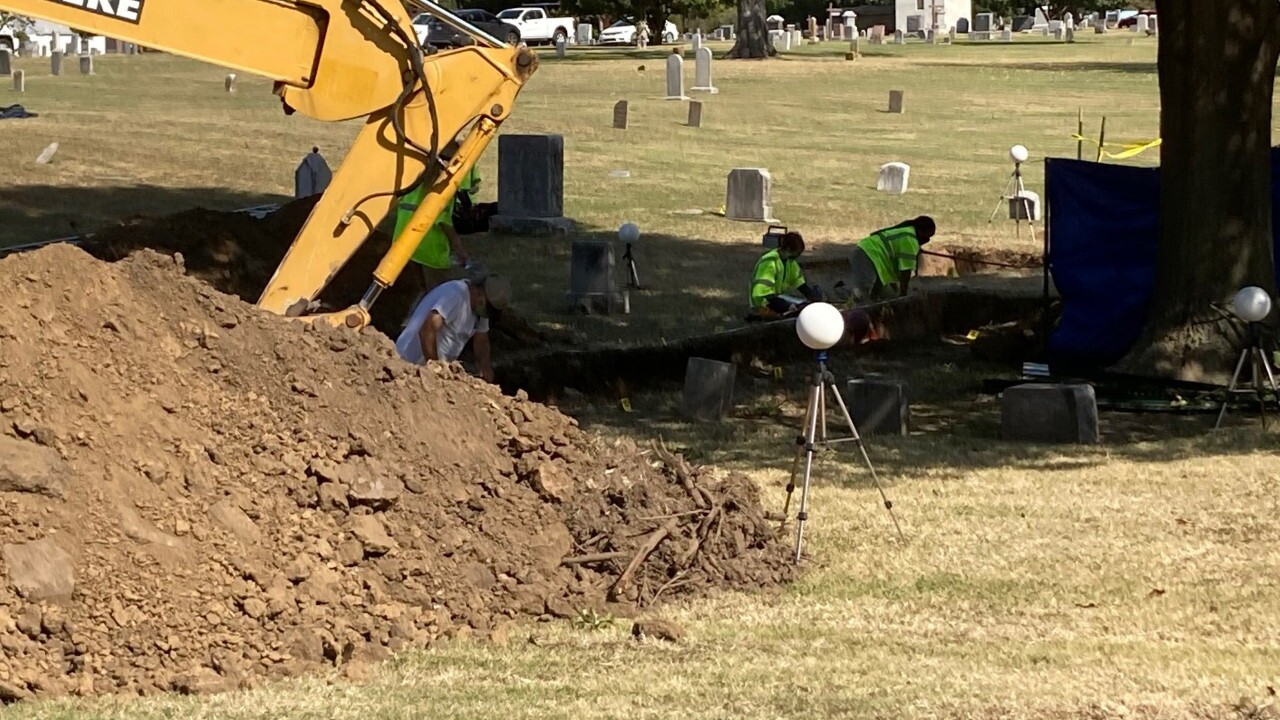 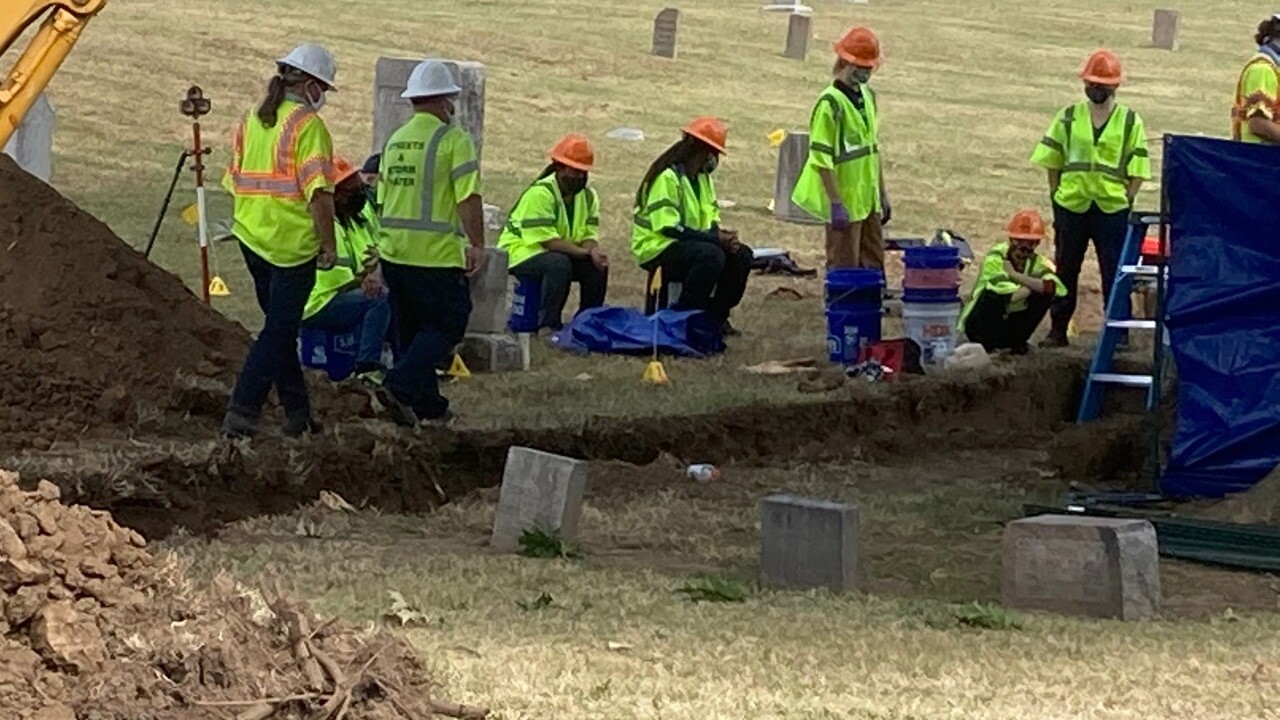 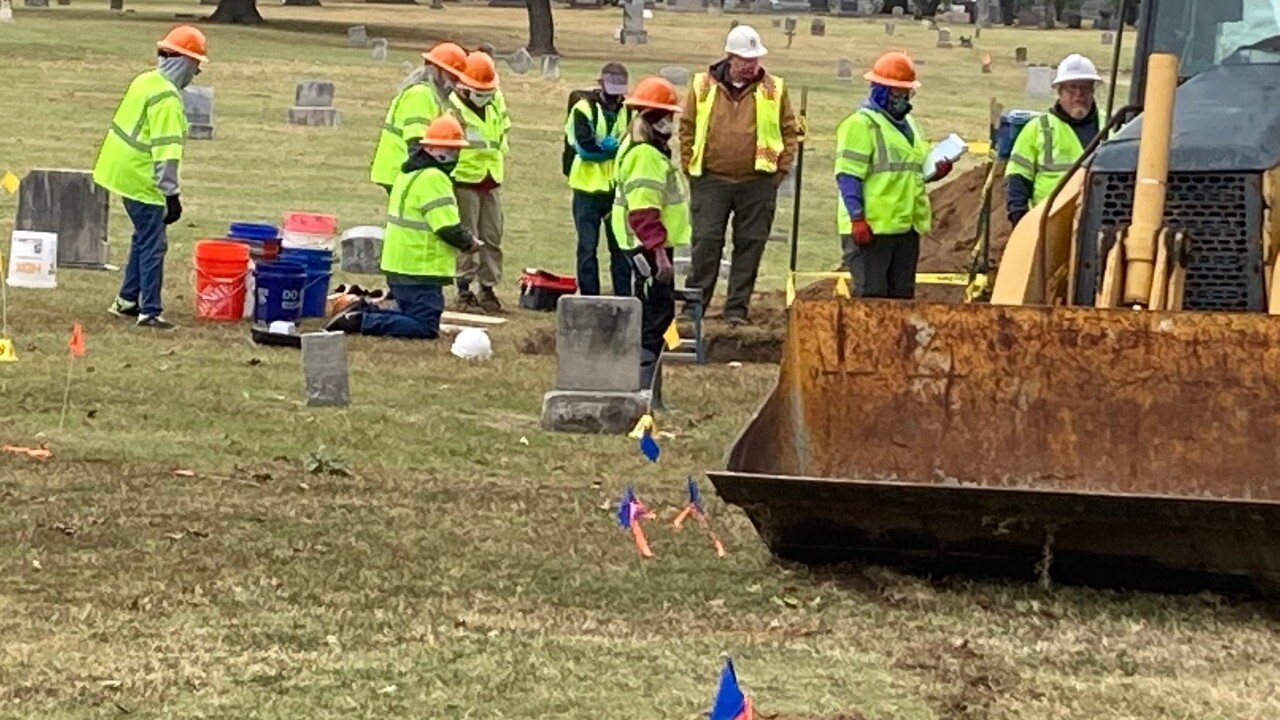 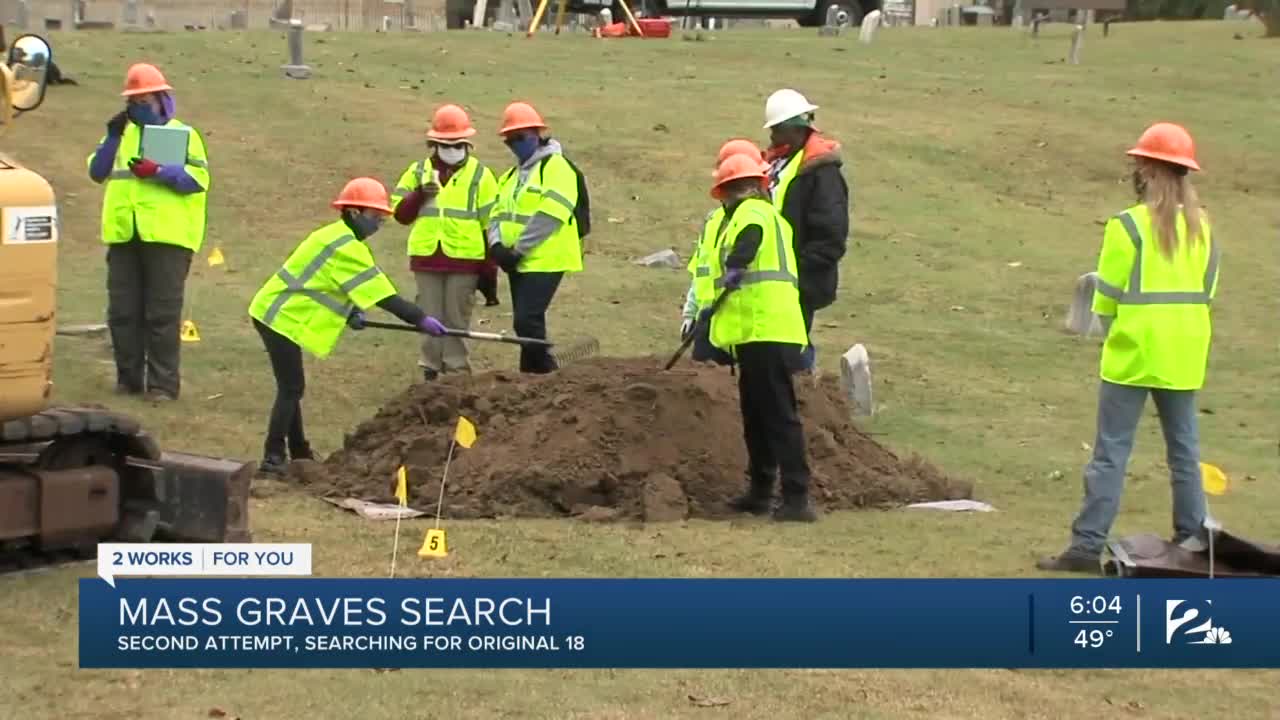 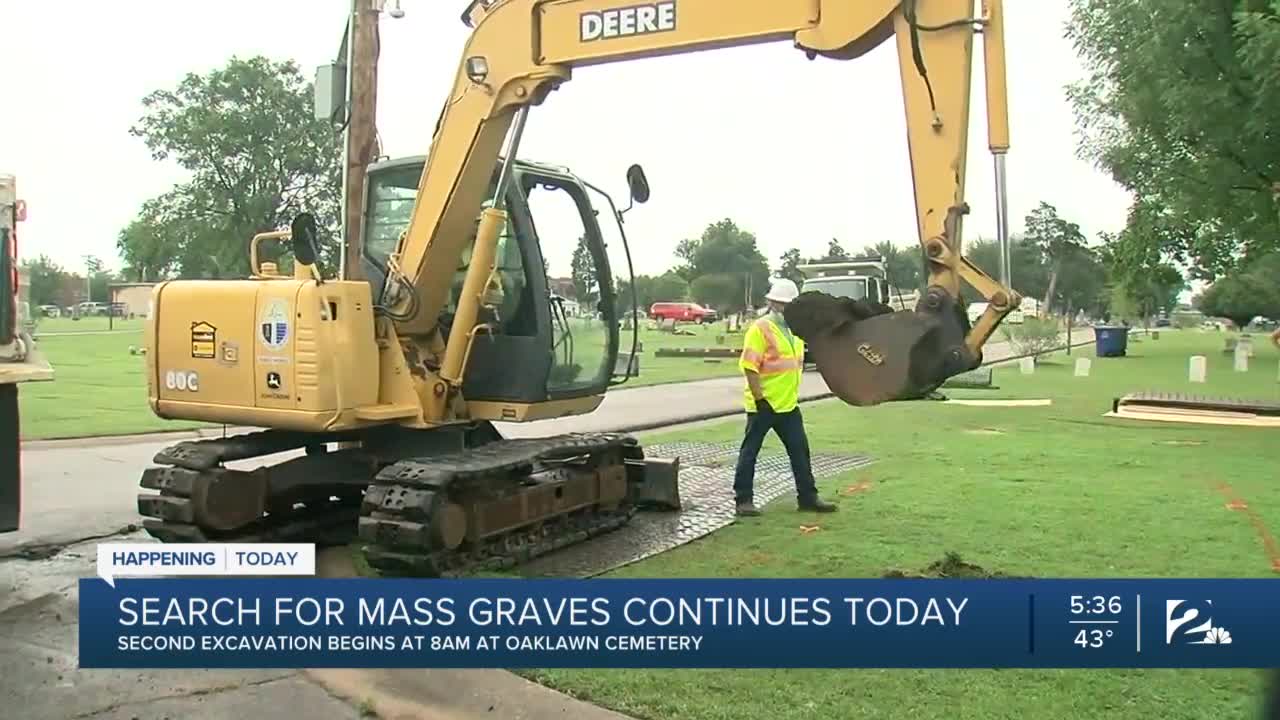 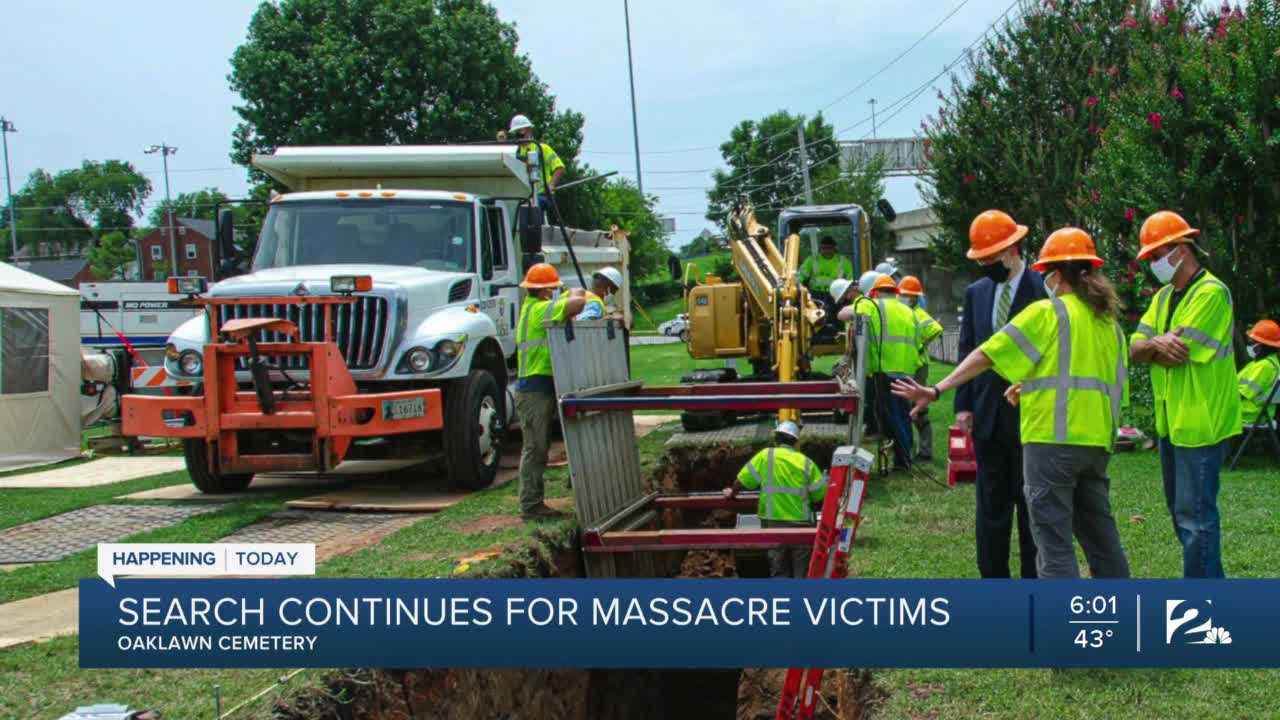 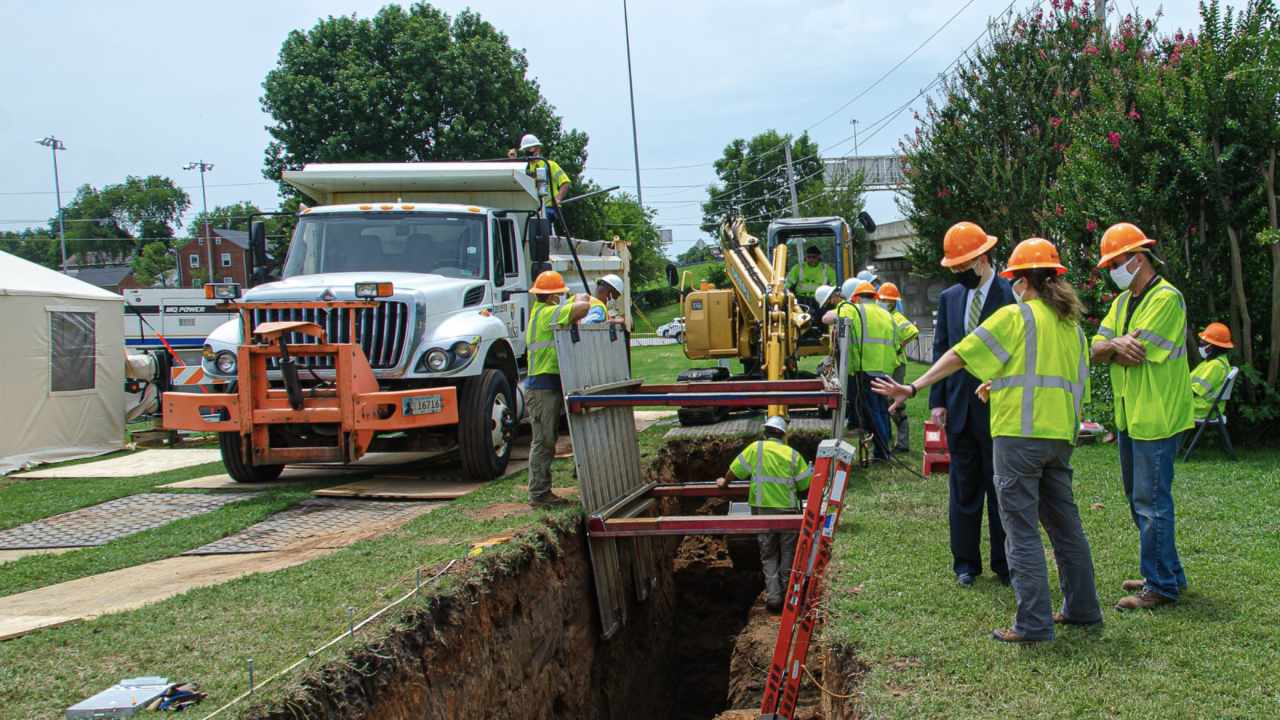 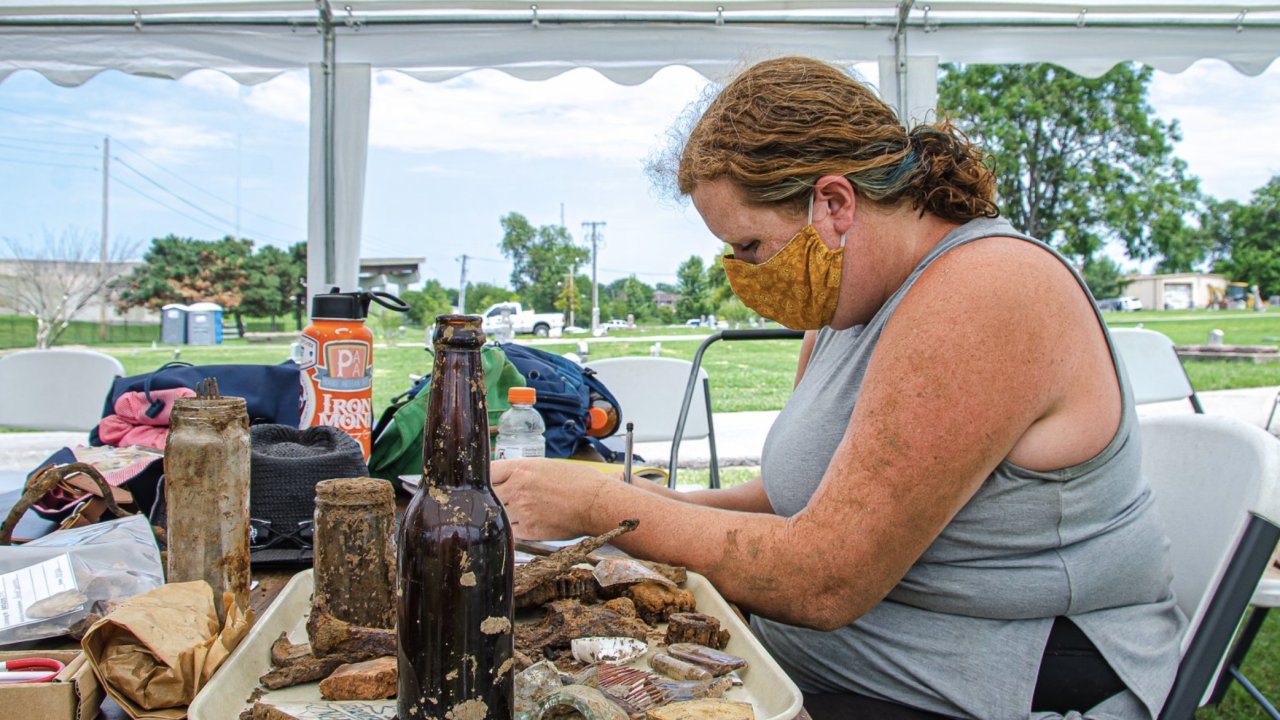 Officials said during a press conference on Thursday they had a minimum of 11 individual burials in one location plus the initial coffin with human remains found on the second day of the excavation. Archaeologists said they identified steps that were cut into the dirt which are indicative of individuals needing to get from the ground level to the grave shaft when it was created. Researchers said the 11th coffin is adjacent to the steps and on the western edge of the shaft.

During the press conference, officials said "We finally found a mass grave." This information comes as researchers conclude operations on Thursday.

On the third day of the second test excavations, archaeologists said they identified a mass grave with outlines of at least ten coffins.

During a press conference on Wednesday, researchers said they do not feel they are at the stage of needing to expose those remains, as they do not want to do any harm.

Researchers encountered the first set of human remains on day two of the second test excavation in the 1921 Tulsa Race Massacre Graves Investigation.

Archaeologists said, during a press conference on Oct. 20, they do not know if the remains are from 1921 at this time. They said they are hopeful to find additional remains. Researchers added that this big discovery gives them a better understanding of where to find more remains.

Mayor G.T. Bynum said he is grateful for the experts who located the remains.

I am very grateful to have the foremost experts in the country working to locate the remains of victims from the 1921 Tulsa Race Massacre. Today, our research team found an unmarked grave in an area previously identified through geophysical survey work. The next step will be to identify if the remains are associated with the Tulsa Race Massacre. This will be done through forensic analysis of the remains, and by comparing them with funeral home and death certificate records. We will continue to take this investigation one step at a time, wherever it may lead.

Researchers said they found the remains three feet below the surface on the west side of Oaklawn Cemetery.

The discovery includes a wood coffin held together with metal nails, a temporary marker used to identify where a gravestone is usually placed and human remains of one person.

State Archaeologist Kary Stackelbeck said signs of trauma will help experts determine if these remains were from the 1921 Tulsa Race Massacre.

Researchers said the investigation is expected to last one week, but could extend into a second week, depending on the findings.

The archaeologists are focusing on two areas in Oaklawn Cemetery this time around.

The first site is adjacent to two 1921 Race Massacre headstones in the historical African American section of Potters field; the second is a new dig site located on the Southwest section of the cemetery.

In 2018, Mayor Bynum announced the City of Tulsa would re-examine potential graves from the 1921 Tulsa Race Massacre. That investigation began in 2020 with crews conducting their search along the western edge of the cemetery. Archaeologists conducted extensive test excavations and concluded with no evidence of human remains.

However, the search could continue beyond Oaklawn Cemetery. Researchers said several areas are still candidates for possible mass grave sites related to the 1921 Tulsa Race Massacre. The Canes, near Newblock Park, and Rolling Oaks Memorial Gardens could be next on the list of possible excavation sites.

For more information on the test excavations from the City of Tulsa, click here.