Virginians prepare for potential mandate on wearing masks in public 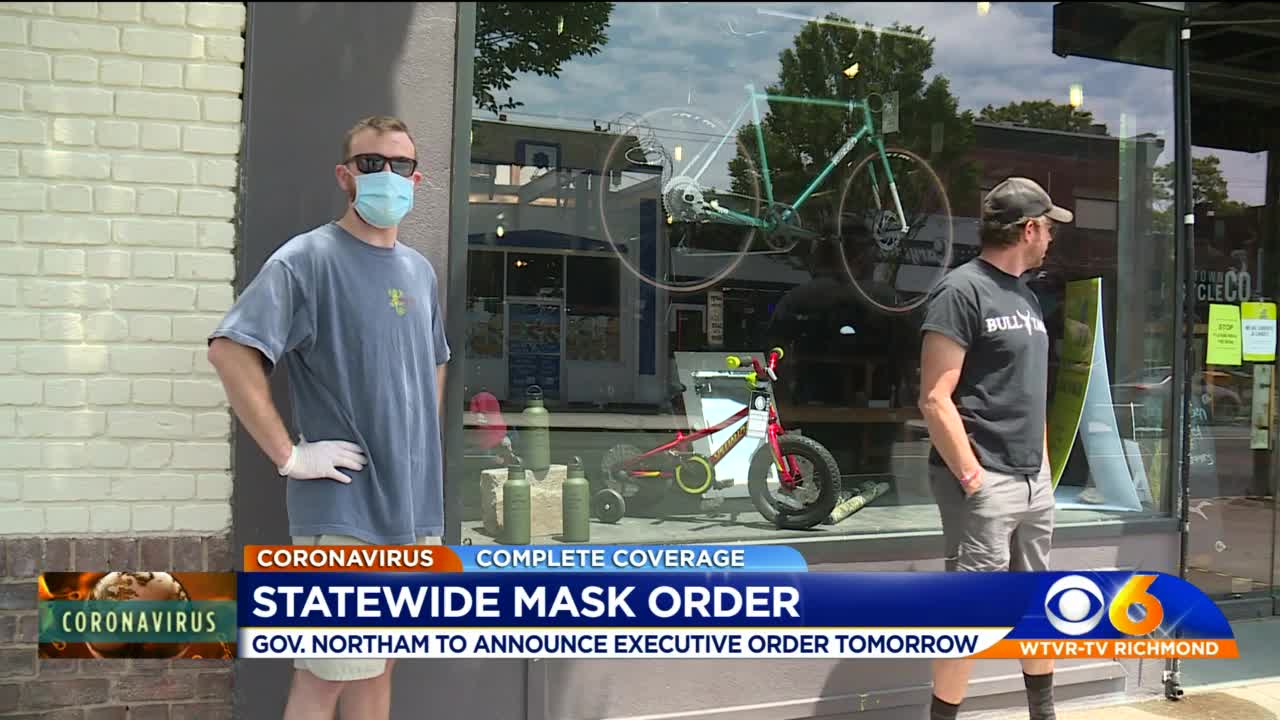 Governor Ralph Northam is expected to announce on Tuesday an executive order requiring Virginians to wear face coverings in public spaces where social distancing cannot be guaranteed at all times.

RICHMOND, Va -- Governor Ralph Northam is expected to announce on Tuesday an executive order requiring Virginians to wear face coverings in public spaces where social distancing cannot be guaranteed at all times.

Since asking Virginians to do their “homework” and obtain facial protection, officials with the Governors office continue to hint an order is coming.

A source with knowledge of the order said it is expected to only apply when going inside Virginia businesses.

The CDC and Virginia health officials have recommended wearing face cloth face coverings for many weeks, citing research that shows coronavirus is easily spread person to person by droplets expelled when someone speaks or coughs. Individuals who contracted COVID-19 but do not display symptoms are of particular concern to health officials, as businesses slowly begin to reopen their doors to the public.

"I think it's fair to say that people have gotten very creative with their facial protections," Northam said Friday. "Be ready on Tuesday to go out and about in your business when it's essential with facial protection,"

The pending order comes several days after Northam faced pointed criticism for not wearing a mask during a visit to the Virginia Beach oceanfront Saturday. The Governor was photographed taking selfies and visiting with beachgoers without visible facial protection.

“The Governor has repeatedly encouraged wearing face coverings inside or when social distancing is impossible. He was outside yesterday and not expecting to be within six feet of anyone,” a spokesperson said, adding that the Governor should have brought a mask with him during the visit.

Final details of the facial covering order are still pending, so who will enforce it and how remains unclear. To this point, individuals have been responsible for obtaining and wearing a face mask in public spaces, and state agencies have distributed thousands of masks in low-income neighborhood around Richmond and elsewhere.

Monday morning near St. John’s Church in Richmond, where Patrick Henry delivered his, "give me liberty or give me death” speech, protestors from the “Reopen Virginia Coalition” held another rolling rally in honor of Memorial Day and in opposition to what they call “government overreach.”

“It’s not governments job to tell us what we have to do,” said David Britt, one of the group’s organizers.

Britt said he keeps an American flag print bandana in his car and wears it when thinks others might feel uncomfortable. Still, he said a facial covering order is too little too late.

“It’s shutting the barn door after the entire herd as already escaped,” Britt said. “When the Governor goes to Virginia Beach on Saturday, and hobs-nobs with folks, and in no way is social distancing, and is not wearing a mask, how am I supposed to take him seriously when he says I need to wear a mask?”

On a sunny afternoon in Carytown, spotting people with a mask on or in-tow didn’t take long. Katie Wall and Matthew Richardson, who live in the Museum District, said they took mask guidelines seriously from the very beginning and support Northam’s pending order.

“Indoors especially because that’s how it’s being transmitted from all the information I see,” Richardson said.

“I would say at the grocery store or pharmacy like 90 percent of people are already doing it, so hopefully the other ten percent will get on board,” Wall said. “I would say it’s not about protecting you, but it’s about protecting other people specifically. Maybe high risk family members that you could transmit it to them and you wouldn’t even know that you did that.”

In the long run, the effectiveness of a statewide mask order likely comes down to an individual’s willingness to wear them in public, no matter what enforcement mechanisms look like.

“I don’t believe it makes a lick of difference, but I’m not going to plant a flag in the ground and say, ‘I will not wear a mask!’” said Britt with Reopen Virginia. “That’s just silly reactionary stuff, and that’s not what we’re about.”

“I think it’s all different definitions of what freedom is because none of this is really freedom,” Wall said of coronavirus restrictions. “I want to be free of, in my opinion, other people’s poor decision making as well.”

This article was written by Jake Burns for WTVR.