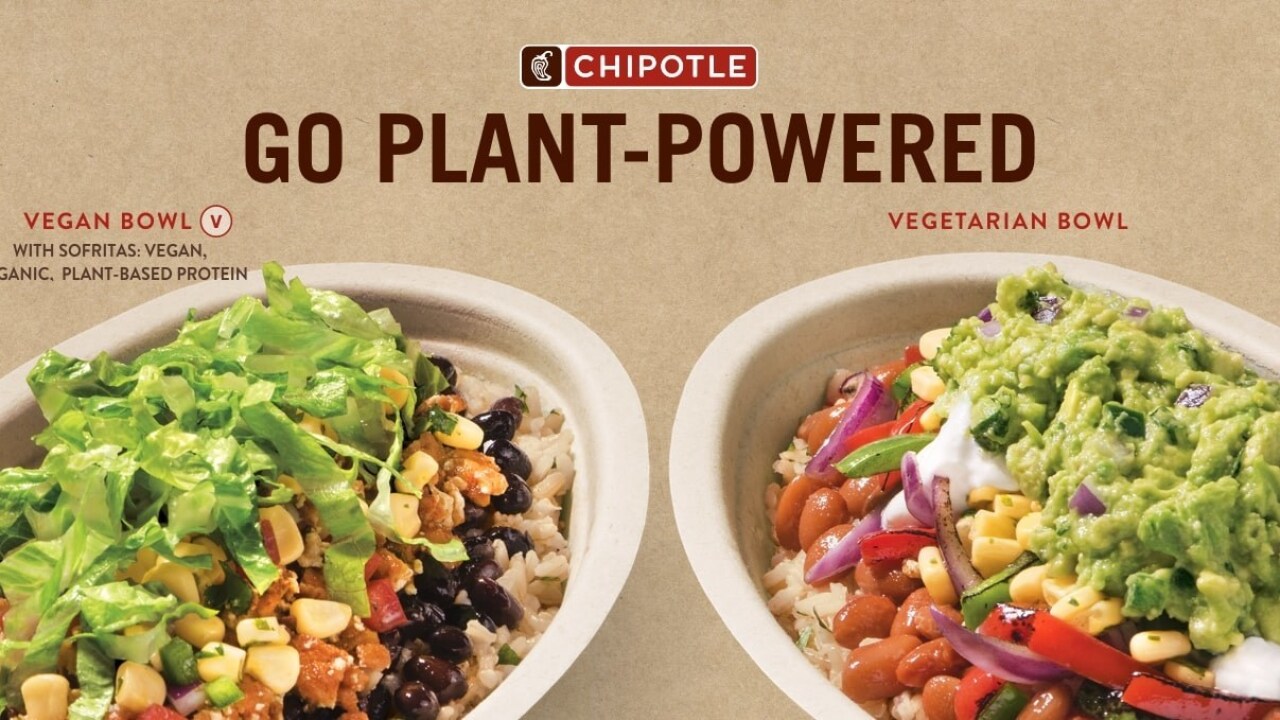 After targeting keto and paleo dieters, Chipotle is courting vegetarians.

The fast casual chain on Monday expanded its new line of diet-based bowls to include vegan and vegetarian options. "Lifestyle bowls" launched earlier this year with Whole30 and double protein meals in addition to the keto and paleo bowls.

The lifestyle bowls are a way for Chipotle to market itself to a wide variety of customers focused on health, especially as it rebounds from E. coli and norovirus scares from a few years ago. And the vegetarian and vegan options could help raise awareness among an increasingly important customer base.

Chipotle first introduced its vegan protein option, Sofritas, in 2014. Demand for Sofritas has continued to grow, the company said. Last year, it cooked 7.5 million pounds of Sofritas. Vegetarian and vegan meals made up roughly 12% of all the meals Chipotle sold in 2018.

"We've found that many people are increasingly looking for plant-based protein options," said Chris Brandt, Chipotle's chief marketing officer. The bowls don't include new vegan or vegetarian ingredients. They're only available as pre-configured options on Chipotle's website or mobile app.

In January, Taco Bell announced a plan to test out a vegetarian menu board that would highlight the restaurant's current vegetarian options, including tacos, tostadas burritos and crunchwraps. Putting all of the meat-free items on one menu should make it easier for vegetarians to see their options, Taco Bell explained.

For Chipotle, the lifestyle bowls are a way not only to lure vegetarian eaters, but to create positive hype for the brand.

During an earnings call in February, CEO Brian Niccol said that the lifestyle bowls "resonated with consumers in a big way." CFO John Hartung said the bowls "created an awful lot of buzz and interest."

"The whole idea here is to really emphasize again that Chipotle can be an option for virtually any diet," said Sharon Zackfia, an analyst who covers restaurants for the research group of asset manager William Blair. By raising awareness of the many different diets Chipotle is compatible with, it is "eliminating the veto factor," she said.

Chipotle has come a long way since it suffered following an E. coli outbreak that 60 Chipotle customers in 14 states ill in late 2015 and early 2016.

Now, customers are coming back. In 2018, the company reported a revenue increase of 8.7% compared to the previous year. Sales at restaurants open at least a year jumped 4% in that time frame, and digital sales surged 42.4%.

To help drive the rebound, Chipotle unrolled its "for real" marketing campaign, which highlights ingredients and offers transparency into its operations, streamlined its pickup options, expanded its delivery services and made its production lines more efficient, among other things.