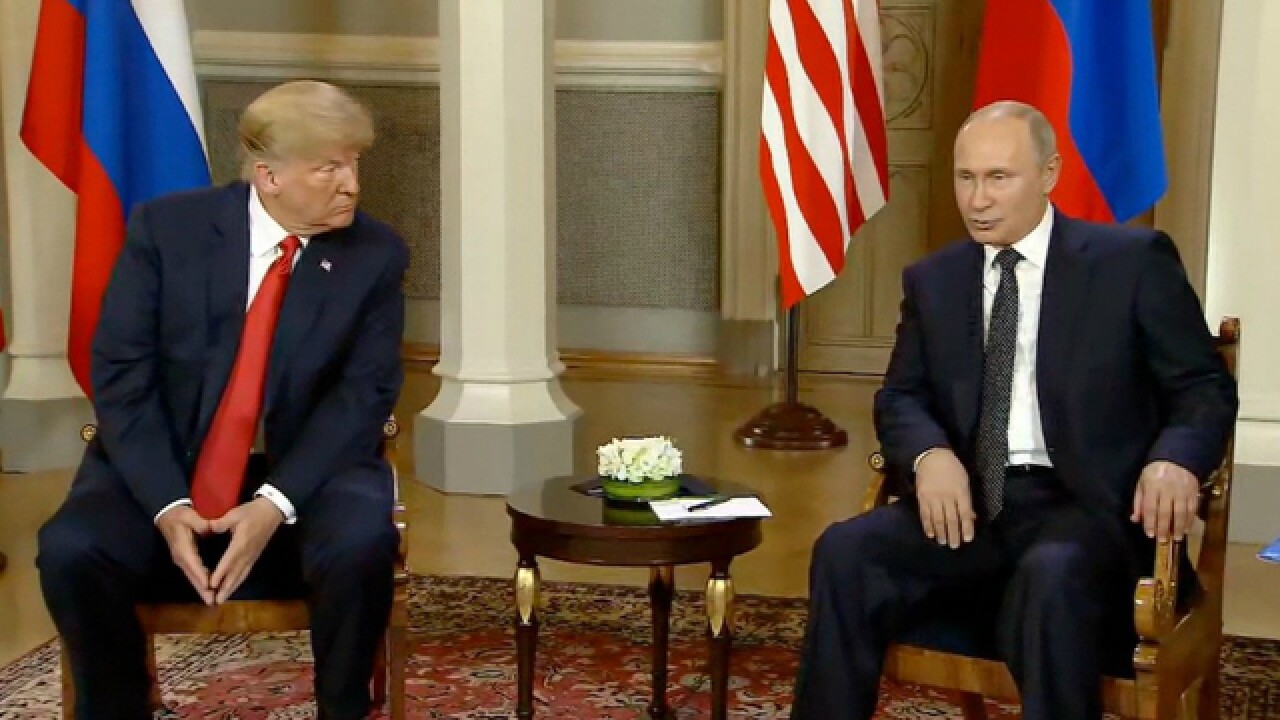 US President Donald Trump said Monday he holds both the United States and Russia responsible for the breakdown in the relationship between the two countries and railed against the special counsel's Russia investigation.

"I hold both countries responsible. I think that the United States has been foolish. We've all been foolish," Trump said during a joint news conference alongside Russian President Vladimir Putin in Helsinki, Finland.

"We should have, frankly, had this dialogue a long time ago. I think that we're all to blame. I think that the United States has now stepped forward along with Russia," Trump said, adding that he feels that the US and Russia have "both made some mistakes."

Trump and Putin blew past the 90 minutes they were scheduled to spend with only interpreters at their sides on Monday, just hours after the US President blamed US policy for the dismal state of relations between the two countries.

After their initial meeting, the two leaders brought in their top aides for an expanded bilateral meeting, the next step in their first official summit, and then concluded with a joint news conference.

Speaking to reporters, Trump again lambasted the special counsel's investigation stemming from Russian interference in the 2016 election as "a disaster for our country."

The US President proclaimed in front of Putin that "there was no collusion" during the 2016 campaign and said he "beat Hillary Clinton easily."

He added the Mueller probe has "had a negative impact on the relationship between the two nuclear powers."

While Trump dove into specifics on US missteps, he did not list any malignant Russian activities responsible for the low point in the US-Russia relationship.

Trump attempted to clarify his statements on Monday afternoon in a tweet, saying "As I said today and many times before, “I have GREAT confidence in MY intelligence people.” However, I also recognize that in order to build a brighter future, we cannot exclusively focus on the past – as the world’s two largest nuclear powers, we must get along! #HELSINKI2018".

As I said today and many times before, “I have GREAT confidence in MY intelligence people.” However, I also recognize that in order to build a brighter future, we cannot exclusively focus on the past – as the world’s two largest nuclear powers, we must get along! #HELSINKI2018

Gathered at the Finnish presidential palace, a historic venue where previous US presidents have also gathered with their Russian and Soviet counterparts to tackle the complex bilateral relationship, Trump made clear at the outset that he hopes the meeting can help transform the relationship into an "extraordinary" one.

"I think we have great opportunities together as two countries that, frankly, we have not been getting along very well for the last number of years," said Trump, who is hoping his personal touch can reverse the steep decline. "I think we will end up having an extraordinary relationship."

But the highly anticipated meetings that had been minutely planned began with a sluggish start after the Russian President arrived late, setting the summit about 45 minutes back.

Putin is known for arriving late to important events -- considered a power play by some observers -- but this time his late arrival offered a role reversal for the US President, who has recently walked in late to meetings at the G7 and NATO summits.

In 2009 and 2012, Putin showed up about 40 and 45 minutes late for his meetings with then-President Barack Obama. But he kept German Chancellor Angela Merkel and Ukrainian President Viktor Yanukovych waiting about four hours each in 2014 and 2012, respectively. Even the Pope waited more than an hour for Putin to show up at the Vatican in 2015.

The two men walked into the palace's Gothic Hall together, offering brief remarks and shaking hands for the cameras before the two men were left alone -- save for a pair of interpreters -- for the first meeting of the day.

Trump and Putin had set aside 90 minutes of solo time -- just as Trump did with Kim Jong Un last month. But the two men spilled into overtime, inviting reporters for the start of their expanded bilateral meeting with top aides 2 hours and 11 minutes after their one-on-one meeting began. Trump was joined by Secretary of State Mike Pompeo, national security adviser John Bolton, White House chief of staff John Kelly, Fiona Hill, the top Russia expert at the National Security Council, and interpreter Marina Gross.

The lengthy tête-à-tête made Trump's remarks ahead of the meeting all the more notable -- and concerning to some.

US officials have stressed the path to improving US-Russia ties runs through a clear-eyed understanding of Russian aggression and the root causes of discord in the relationship, but Trump is signaling a different course. He is holding previous US administrations and the Justice Department's investigation stemming from Russian meddling in the 2016 election responsible.

"Our relationship with Russia has NEVER been worse thanks to many years of U.S. foolishness and stupidity and now, the Rigged Witch Hunt!" Trump tweeted Monday morning ahead of the summit.

Trump was eager to have time alone with Putin to better personally assess him and develop a personal relationship, according to a US official, but he has also expressed anger at leaks from his meetings with foreign leaders and told aides he wanted to ensure his sensitive discussions with Putin remained secret.

The official also said that Trump doesn't want aides -- who may take a harder line on Russia -- undercutting or interrupting him during his talks with Putin.

Just days earlier, Trump pointed to the "pure stupidity" and a "political problem" in the United States for making it "very hard to do something with Russia."

"Anything you do, it's always going to be, 'Oh, Russia, he loves Russia,' " Trump said during a joint news conference with his British counterpart.

Trump's Monday morning tweet and his words and actions in the last week have only amplified concerns about his approach to Russia among US allies and lawmakers of both parties in Washington. During his swing through Brussels and the United Kingdom, Trump has repeatedly criticized US allies, called the European Union a "foe" and criticized the Obama administration rather than Russia in the wake of the Justice Department's indictment of 12 Russian agents who allegedly worked to hack Democrats' emails and computer networks during the 2016 election.

Ahead of his meeting with Putin -- who is alleged to be behind the assassination of journalists and political dissidents -- the US President also lashed out again at the news media on Sunday by branding journalists "the enemy of the people."

Trump again -- as he has repeatedly done -- pointed the finger at his predecessor President Barack Obama and characterized the investigation stemming from Russian election interference as a "witch hunt."

"President Obama thought that Crooked Hillary was going to win the election, so when he was informed by the FBI about Russian Meddling, he said it couldn't happen, was no big deal, & did NOTHING about it," Trump tweeted. "When I won it became a big deal and the Rigged Witch Hunt headed by Strzok!"

Everything from Russian meddling in the 2016 election to the conflicts in Syria and Ukraine are expected to be on the agenda for their summit here in Helsinki, but Trump has signaled he is most eager to jumpstart talks to "substantially reduce" the two countries' nuclear weapons arsenals and generally improve US-Russia relations.

Trump is not, however, expected to offer to halt military exercises in the Baltics as part of his discussions with Putin, with a US official telling CNN's Jeff Zeleny "at least that's the plan going in."

The question of the Baltics exercises has hung over the summit, particularly after Trump abruptly decided last month to agree to stop joint US-South Korean military exercises during his meeting with Kim.

Trump had said he intended to once again ask Putin about Russian efforts to sway the results of the 2016 election, but signaled he would not press the issue.

Trump has sought to cool expectations in the last days leading up to the summit, saying in an interview Saturday that he planned to arrive in Helsinki "with very low expectations."

"I think that getting along with Russia is a good thing, but it's possible we won't," Trump said.