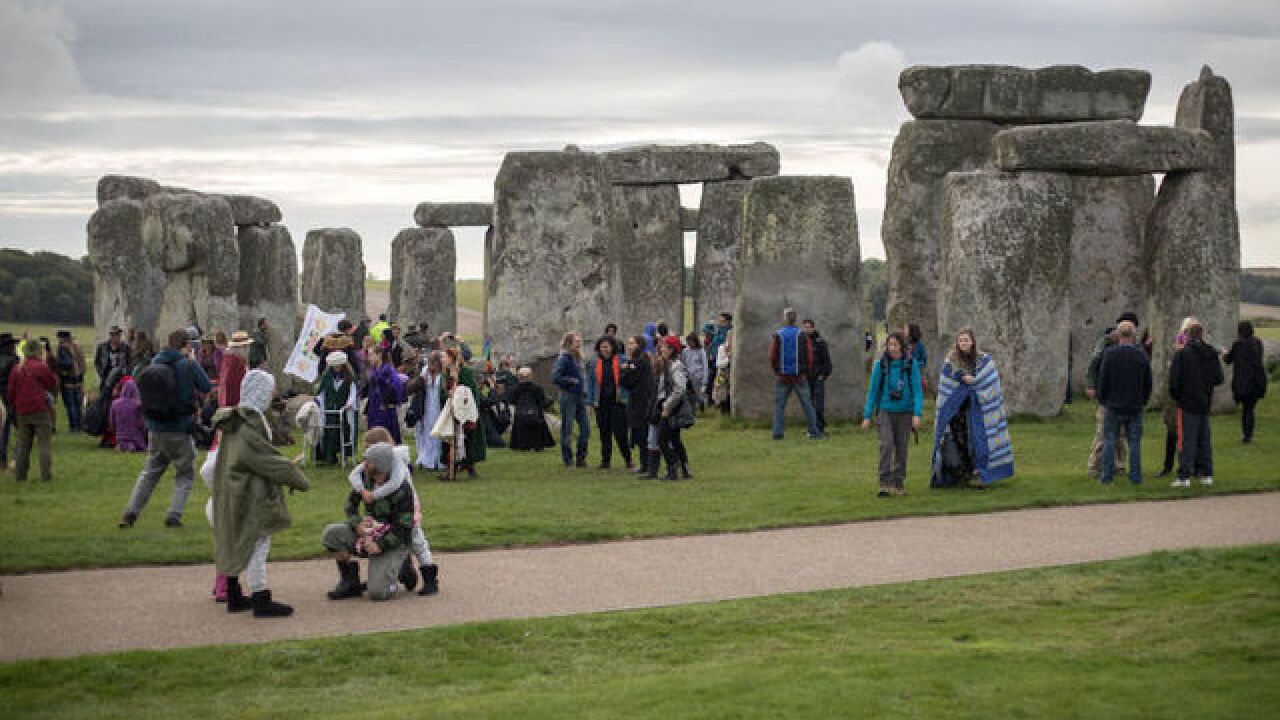 Copyright Getty Images
Matt Cardy
<p>Druids, pagans and revellers gather at Stonehenge, hoping to see the sun rise, as they take part in autumn equinox celebrations at the ancient neolithic monument of Stonehenge near Amesbury on September 23, 2017 in Wiltshire, England. </p>

As one of the world's most famous prehistoric monuments, Stonehenge still holds many secrets despite centuries of study. For the first time, new research is lifting the veil on the people who are buried at Stonehenge.

The study was published in the journal Scientific Reports on Thursday.

Much of the previous research around the monument in Wiltshire, England, has centered around how or why Stonehenge was built -- not the people buried there or who built it.

But studying the human remains at Stonehenge is no easy task. In addition to dating back to 3,000 BC, the remains were also cremated. During the early phase of Stonehenge's history, it largely served as a cemetery.

The results revealed that 40% of the people buried at Stonehenge likely came from west Wales, the suggested origin of the site's smaller bluestones, and they most likely helped transport the stones and build Stonehenge. Signals from the bone analysis suggested that within the last ten years of their lives, these people were not living at Stonehenge nor originally from the area around Stonehenge, known as the Wessex region.

"Our results are the first one to provide direct evidence on the origin of those buried at Stonehenge, shedding light on the importance of the site in the Neolithic landscape," Snoeck said in an email.

When Snoeck was working on his doctoral research at the University of Oxford's School of Archaeology, he was able to show that cremated bones still retain vital information.

"My research goal was to assess what information could still be obtained from archeological human remains even after cremation," Snoeck said. "I managed to demonstrate that some geographical information still remained in cremated bone and this new development is what enable us to go back to the human remains from Stonehenge and carry out this exciting study. "

The Historic England and English Heritage that looks after historic sites across England gave Snoeck and his colleagues permission to use this new technique, called strontium isotopic analysis, on cremated human remains from 25 individuals. The chemical element strontium is a heavy alkaline earth metal that is about seven times heavier than carbon. This can reflect the average of the food eaten over the last decade before death. Geological formations and soil also reflect strontium isotope ratios, like the signature of the chalk that the Wessex region sits on.

By performing this analysis on the remains, the researchers would be able to figure out where these people had lived during the last ten years of their lives because the signature would still be in the bones.

The remains, dating from 3,180 to 2,380 BC, were initially uncovered by Colonel William Hawley during excavations that occurred during the 1920s. He reburied them in pits within the Stonehenge site that are known as Aubrey Holes, named for 17th century antiquarian John Aubrey who first discovered the pits. Three of the individuals were juveniles, while the others were likely adults, and they were able to identify that nine were possibly male and six were possibly female.

But temperatures during cremation, depending on the method, can reach over a thousand degrees Fahrenheit. How would that affect any information left within the bones?

"When it comes to light chemical elements (such as carbon and oxygen), these are heavily altered but for heavier elements such as strontium no alteration was observed," Snoeck said. "On the contrary, thanks to the high temperatures reached, the structure of the bone is modified and making the bone resistant to post-mortem exchanges with burial soil."

The analysis of the bones was also matched with results from plants, water and teeth data from modern-day Britain. They discovered that 15 of the individuals were locals, but the other ten weren't connected to the region and likely spent at least the last ten years of their lives in western Britain -- which includes west Wales.

"We did not expect to see so many individuals having a signal that shows they did not [live] near Stonehenge in the last decade or so of their life," Snoeck said.

"To me the really remarkable thing about our study is the ability of new developments in archaeological science to extract so much new information from such small and unpromising fragments of burnt bone," said Rick Schulting in a statement, study coauthor and associate professor of scientific and prehistoric archeology at the University of Oxford.

But if these people were cremated in Wales, how did they end up at Stonehenge?

During his 1920s excavations, Hawley noted that some of the cremated remains in the Aubrey Holes were stored in leather bags, which led him to believe that they "had apparently been brought from a distant place for interment."

Perhaps their remains were brought from Wales and buried when the bluestones were being raised at Stonehenge, the study authors suggest. This knowledge is compelling to the researchers, given that a recent theory suggests the bluestones initially stood within the Aubrey Holes themselves.

Being able to connect the stones and human remains to Wales provides more intriguing theories and rare insight for researchers as well.

This suggests that the construction of Stonehenge required connections that were 140 miles apart. As early as 5,000 years ago, Neolithic people and materials were going back and forth between west Wales and Wessex to build and use Stonehenge.

Snoeck hopes to develop new methods and apply his technique at other sites containing cremated remains. But the gravity of working with human remains from Stonehenge was a privilege.

"It was extremely exciting and terrifying at the same time," Snoeck said. "In a way, it was like giving them a new life."