At least 5 dead in wildfire that destroyed Paradise, California 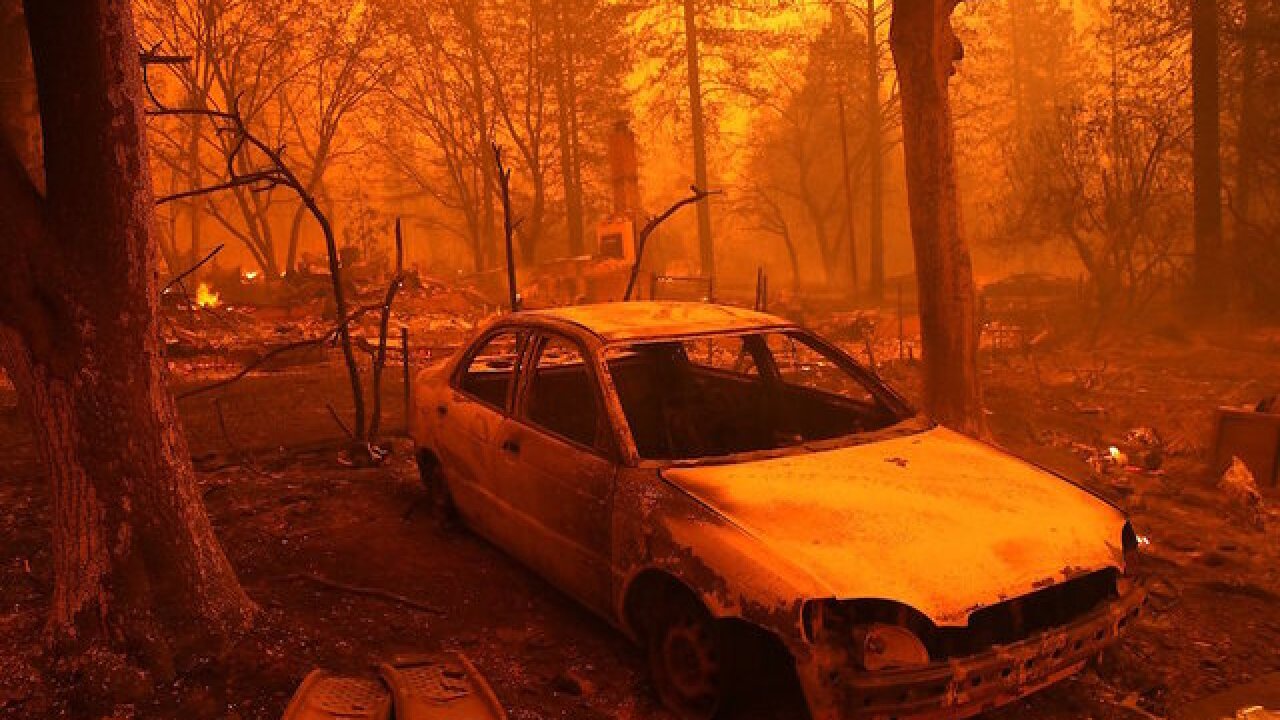 Image copyright 2018 Getty Images. All rights reserved. This material may not be published, broadcast, rewritten, or redistributed.
Justin Sullivan/Getty Images
<p>An unknown number of homes and buildings in Paradise have been destroyed by the Camp Fire.</p> 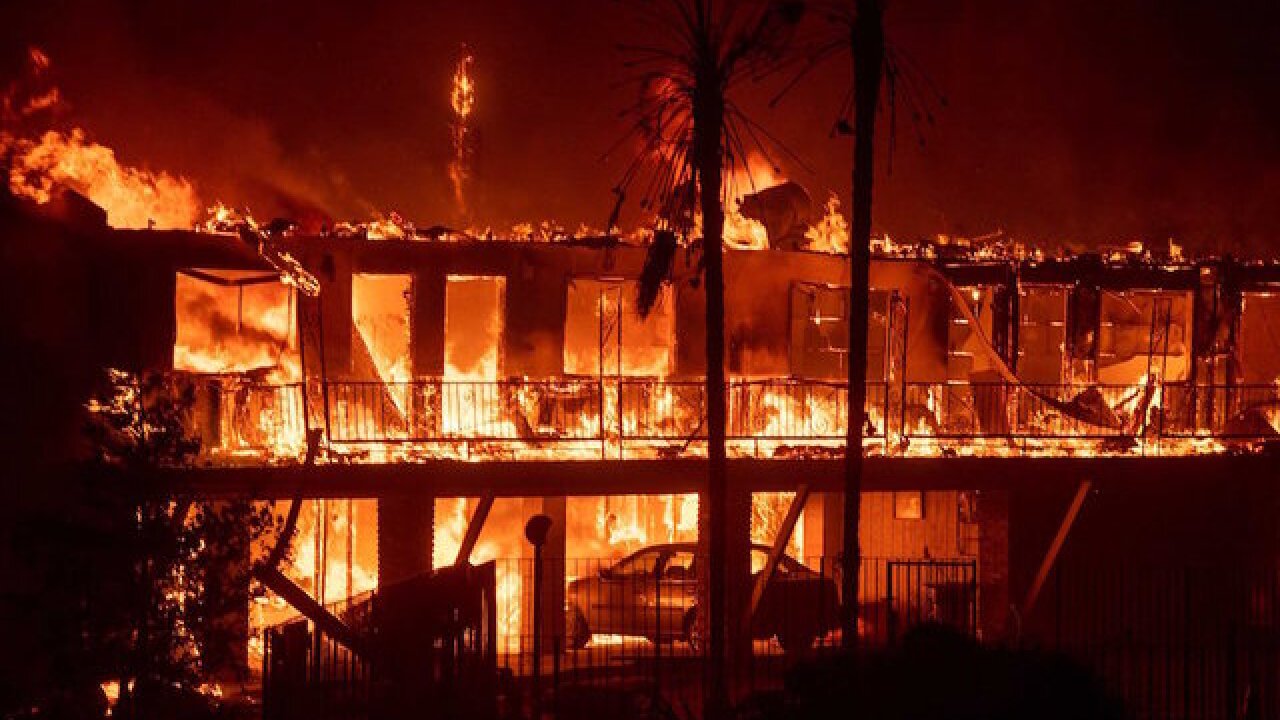 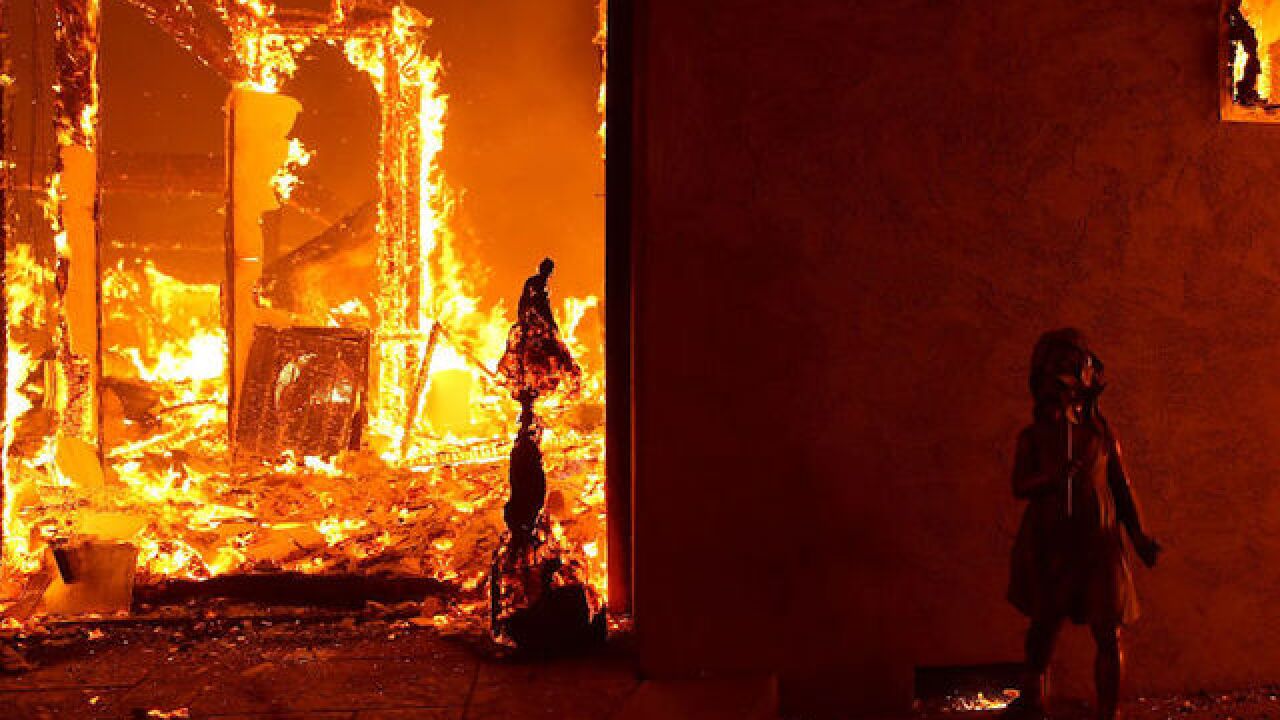 A series of fast-moving wildfires is racing Friday up and down California, leaving at least five dead, destroying thousands of structures and forcing thousands of residents to evacuate through flame-lined streets.

A blaze in Northern California sent terrified residents running for their lives as it closed in and destroyed parts of the town of Paradise. Five people were found dead there vehicles that were overcome by flames, the Butte County Sheriff's Office said.

And two Southern California fires are just miles from the bar where 12 people were killed in a mass shooting in Thousand Oaks, and evacuations were ordered for Malibu, a seaside city popular with celebrities.

Here's what we know about the trio of fires:

In Northern California, panicked residents fled the town of Paradise on Thursday morning with seemingly little notice as the Camp Fire swept through it.

Paradise, a town of 26,000 people roughly 80 miles north of Sacramento, is where at least five people were found dead.

By Friday morning, the fire had burned 70,000 acres, destroyed parts of Paradise and was burning on the outer edges of Chico, a city of 93,000 people about a 90-mile drive north of Sacramento. Area hospitals evacuated and all of Butte County schools were closed Friday.

At least 40,000 residents were forced to evacuate in Butte County after the fire broke out early Thursday, "growing uncontrollably" at a rate of about 80 football fields per minute.

Whitney Vaughan described a scene of panic and terror as she recalled her narrow escape from her Paradise home Thursday morning.

Vaughan and her husband had just fled their home as flames rushed them. She saw a man "sprinting past our house carrying a little baby, running as fast as he could."

They drove away but got eventually got caught in traffic. Flames were feet away, smoke was thick, cars weren't moving and people were panicking. Some people left their cars there "and took off running, carrying their babies and kids."

She cried as she recorded video of the terrifying scene, which she posted to Facebook. She and her husband eventually were able to drive away safely.

"We thought the fire was going to kill us," she told CNN.

The blaze burned Western Town at Paramount Ranch, according to the Santa Monica Mountains National Recreation Area, a unit of the National Park Service. The buildings were seen in movies and television series such as "The Mentalist" and "Weeds."

The full extent of the destruction in the county was still unknown, but authorities said they believe as many as 2,000 buildings have been destroyed -- most of those in Paradise, the California Department of Forestry and Fire Protection (Cal Fire) wrote in an incident update.

Three firefighters and some civilians have been injured, Cal Fire officials said. The extent of their injuries is unknown.

In Paradise on Friday morning, the town's main road was littered with downed trees and power lines. Much of the brush and grasses were blackened along the valleys, and many trees were still burning, a CNN crew there observed.

Late Thursday, more than 2,200 firefighters were battling the flames and the fire remained uncontained, according to Cal Fire.

Gov.-elect Gavin Newsom declared a state of emergency in the area and requested federal funds to help those impacted by wildfires in the state. Newsom is serving as acting governor while Gov. Jerry Brown is traveling out of state.

Authorities fear the fire, fueled by strong winds, could reach Chico -- a city of 90,000 people where many Butte County families already have evacuated to shelters.

In Southern California, strong Santa Ana winds were fanning two fires, including the Woolsey Fire, which by Friday morning had burned across US 101 and was heading in the direction of Malibu.

The Woolsey Fire exploded from 2,000 acres to 8,000 in Los Angeles and Ventura counties in a matter of hours. Friday, officials said it had grown to 14,000 acres.

At least 75,000 homes in Ventura and Los Angeles counties were under evacuation orders, and some structures have already been destroyed, officials said.

The fire crossed US 101 a few miles east of Thousand Oaks -- the site of Wednesday night's bar shooting -- and was headed south to the Pacific coast, in the direction of Malibu Creek State Park and Malibu city, the Los Angeles County Fire Department said.

Mandatory evacuations were ordered for Malibu.

And in part of Malibu itself -- a city of about 12,000 people known for beachside homes owned by celebrities and millionaires -- a voluntary evacuation advisory was issued Friday morning.

"Please, please, please if you are asked to voluntarily leave the area, please do," Ventura County fire Capt. Scott Dettore told CNN affiliate KTLA on Friday morning. "Make sure your stuff is packed and ready. Please leave the area."

Pepperdine University on Friday closed its Malibu and Calabasas campuses because of the approaching blaze.

In Malibu, journalist Julie Ellerton said she was calmly packing Friday morning after staying up all night.

Ellerton, in an email to CNN, said it was strange to go from covering events related to Wednesday's shooting "to looking up in the afternoon and seeing plumes of smoke."

"My heart's still with those suffering the loss of their children, their husband and their dad. I can't think anything matters more -- packing 'items' seems strange. The smoke just seems surreal," she wrote.

In Hidden Hills, just north of Calabasas, Adrienne Janic gave her home over to firefighters late Thursday to use as a command center. Her deck provided a strong vantage point to monitor the spread of the fire.

By 1 a.m. (4 a.m. ET), more firefighters arrived as the flames closed in on Janic's street

"While a lot of my yard and neighbors' yards burned, the firefighters saved our homes," Janic tweeted just after 2 a.m. (5 a.m. ET) Friday. "We are still not out of the woods yet."

"I had to work this evening, and ran out when I realized how close it was," Little told CNN. "We have found a safe hotel ... (in) Los Angeles."

Video of her drive out of town shows the fire emitting an orange-red glow in the distance in the nighttime sky.

The Hill Fire is the other fire burning near the site of this week's mass shooting in Thousand Oaks.

The fire started Thursday afternoon and spread quickly to cover about 6,000 acres, fire officials said. Friday, part of it was burning into the footprint of a 2013 wildfire, which could slow its spread, Ventura County Fire Chief Mark Lorenzen said.

Residents on social media posted their views of the flames nearly consuming the hillside in the Newbury Park area of western Thousand Oaks.

While no homes or businesses have been lost to the fast-moving blaze, a number of RVs and outbuildings have been burned and a firefighter suffered a minor injury, authorities said.

Howling Santa Ana winds were driving the Woolsey and Hill fires. The Santa Anas are strong, dry winds that high-pressure systems push from east to west, from the mountains and desert areas down into the Los Angeles area.

Wind gusts of up to 77 mph were reported in Los Angeles County on Friday morning.

Winds were expected to weaken Friday afternoon into Saturday. A second round of Santa Ana winds is forecast to whip the area Sunday through Tuesday, though it may be weaker than Friday's.