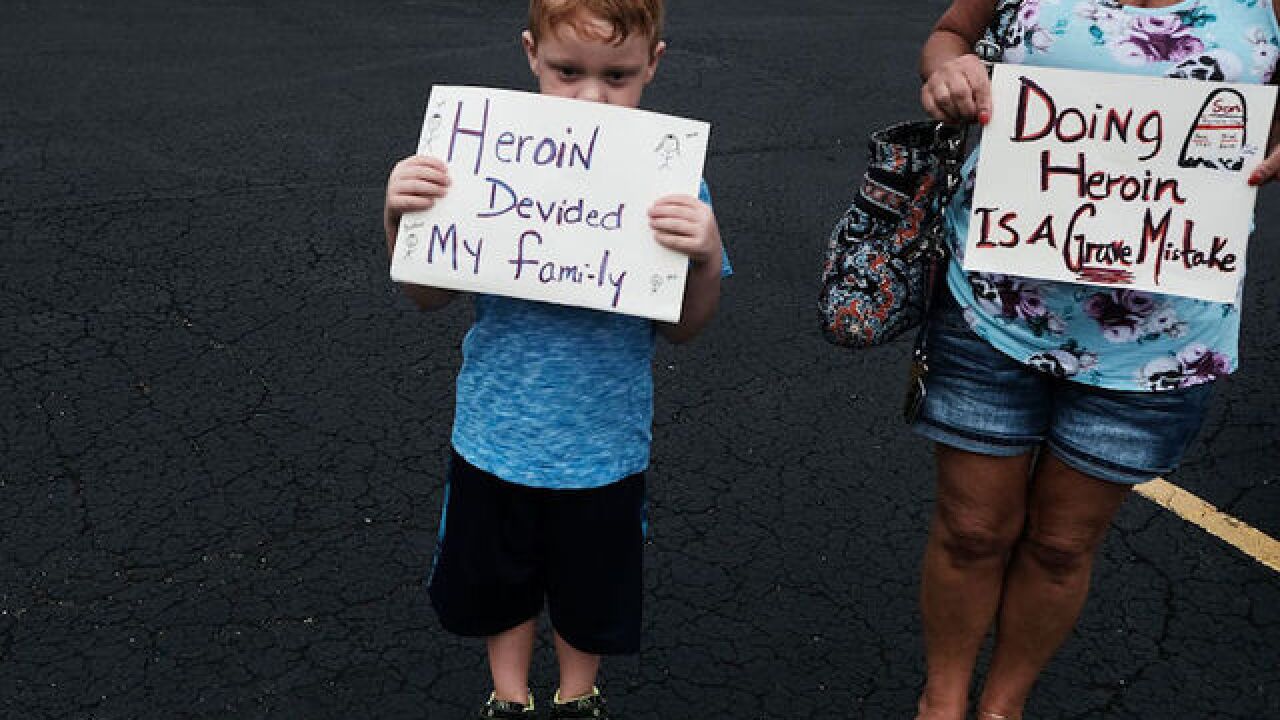 Copyright Getty Images
Spencer Platt
<p>Derrick Slaughter (5) attends a march through the streets of Norwalk against the epidemic of heroin with his grandmother on July 14, 2017 in Norwalk, Ohio. Both of Derrick's parents are heroin addicts and he is now being raised by his grandparents. </p>

When Brandon Vinson talks about his life-and-death struggle to overcome opioid addiction, being homeless for a while and how scared he was he'd end up in jail or even worse, his voice is calm and detached, as if he's narrating someone else's harrowing tragedy.

It started, says Vinson, 25, with a not-so-unusual combination of events in a not-atypical teenager's life. He'd been prescribed opioids once for an injury, then he and some friends started experimenting with various substances to get high. Taking someone else's left-over Oxycontin felt like coming home.

If, that is, home is a merciless heroin addiction that drives you to steal from your sister and pawn your parents' stuff to buy just a little bit more until you reach the moment when the mom and dad who'd do anything for you give you an ultimatum and you choose homelessness over cleaning up.

There Brandon was, living outdoors and in shelters, cold and tired and always trying to figure out how to get just a little more heroin to make the aches and jitters and nausea leave. Completely miserable, he finally told his folks, Mark and Lisa Vinson, that he'd do anything to come home. And he did, throwing himself into a treatment program and recovery with everything he had.

And it worked — until he fell more than 12 feet from a ladder at work onto concrete, breaking his hip. The only medicine strong enough to control his unbearable pain, an opioid, sent him right back to heroin.

As Vinson carefully picks his way through what he hopes will be a final addiction recovery, his story is not that uncommon. Opioids have moved from the streets into American homes to such an extent that a new survey finds individuals report their own rates of addiction and the rates within their families are nearly on par with rates of alcohol addiction — although experts say alcohol addiction is actually more prevalent.

The third annual American Family Survey, released today, reveals that 5 percent of adults say they're addicted to opioids or heroin, 6 percent claim an alcohol addiction and 4 percent say they're hooked on marijuana. The number who report addictions in their families is more than twice that: 12 percent say there is an opioid addiction in their family, while for alcohol and marijuana the percentages are 15 and 10, respectively.

The American Family Survey, conducted by YouGov for the Deseret News and the BYU Center for the Study of Elections and Democracy, is a nationally representative poll of more than 3,000 adults. The findings were released Thursday in Washington, D.C.

"It's fascinating that the public sees rates of addiction between alcohol and heroin/prescription opioids as being about the same," said Jeremy C. Pope, who, along with Christopher F. Karpowitz, is co-director of the BYU center and co-author of the survey report. "What I wish we could tease out is, are they thinking too low on alcohol or thinking opioids are more prevalent than they are?"

Perception of prevalence may be slightly inflated, but the impact of addiction on families is hard to exaggerate, said Lisa Vinson, who describes the "pain and despair" her own family has felt.

The survey also documented the impact on families. About 21 percent of respondents who said there was substance abuse in their family said it had a major negative effect on the respondent's mental or physical health, and 24 percent noted a major negative effect on family relationships. One in 10 said their own job was severely negatively impacted. And even more said they experienced some minor negative impact in those areas.

"When you don't know what to do, you don't do anything for a while, which is a really bad place to be in. Now, I'm cautiously optimistic. Brandon wants to be clean and live a good life and a productive life. I think he will," Lisa Vinson said.

Her son agrees. "I think I'd still be sober from before if not for the accident," he said. "Now I've put other safety nets in place. ... Honestly, I just want a normal life: a good job, a family, not having to worry about the things I've had to worry about. The sober life is a lot less complicated life, and I don't want to deal with all the problems of being an addict."

People who reported personal addictions in the survey were also "vastly more likely" to say that they'd experienced an economic crisis during the past 12 months. And reversing the question, about 12 percent of those with a money crisis said they were addicted to opioids. The numbers who claimed economic woes were similar for those who claimed marijuana addiction, though lower for alcohol, Pope said.

Whether people "medicate" themselves because of money problems or have those problems due to their addiction is not known; the survey didn't look at that. But "it does say that economic pain is tied to how big this problem is," Pope noted.

Besides the financial cost of Brandon Vinson's addiction on his family — for treatment, but also the value of the things they lost to his need to buy drugs — the Vinsons and other families with addiction also report a human cost. Brandon's relationship with his sister Haley was harmed not just by his actions, but by resentment that he took so much of his parents' attention. At the peak of his addiction, she told the Deseret News, she resented him a lot. And she's not sure what to expect of his recovery.

It didn't take too long for the Vinsons to figure out that Brandon was doing things he shouldn't, his mom said, but it took a while to realize the problem was a heroin addiction.

The survey found that reported addictions were higher among Hispanics than among blacks or whites. Nonvoters reported higher personal addiction rates, at between 8 and 9 percent, than Trump or Clinton voters.

More addictions were reported by urban than rural respondents and by low-income individuals than among those with high incomes, although when it comes to extended families, little difference was found in reported addiction rates for high- and low-income families.

The survey also looked at reported rates of addiction through the lens of the "success sequence," which says individuals fare better if they hit certain life milestones in a particular order: graduate from high school, get a job, marry and only then have children. The report notes that "though relatively few people claim personal addiction, the proportion is three to four times higher among those who have not followed the success sequence. When considering the extended family and addiction rates, the proportions similarly double."

Asked who is responsible for drug addictions, respondents blame those involved in the drug transaction: the user and the dealer. Far fewer blame government policies, doctors and hospitals, drug companies or insurance companies. They place the least blame on the family of the addict, the survey finds.

That's comforting to Lisa Vinson, who said she never in the world expected to be dealing with heroin addiction in her family. She and her family kept it quiet as long as they could, embarrassed and worried they'd be judged by others because it felt like they were suffering alone. They weren't.

"We were not just a typical family," she said. "We were a typical Mormon family." Experts say addictions cut across every demographic boundary you can think of, so no group of people is automatically immune.

The survey found differences between Clinton voters, Trump voters and nonvoters on this issue of blame: Republicans hold government policies slightly more accountable for addictions, while Democrats do the same to drug and insurance companies. Overall, about one-fourth blame the doctors who prescribe the drugs and the drug companies that make them.

The survey found that people used different strategies to respond to addictions within their families, although about one-fourth did not intervene at all. The most common intervention was confronting the abuser (36 percent), followed by becoming educated on addictions (35 percent), confiding in trusted friends or a spouse (28 percent), and seeking counseling (20 percent). While 22 percent let the individual face the legal consequences of the addiction, 7 percent staged an intervention, 12 percent took the addict to the hospital or called a doctor and 9 percent called police. Some tried multiple strategies.

Christina Zidow believes parents need to be careful how they handle alcohol and prescription drugs around their children if they want to discourage abuse and addiction. Zidow is the chief operating officer at the Odyssey House substance abuse treatment program in Salt Lake City, Utah. She notes there are parents who see nothing wrong with serving alcohol to their underage children or who offer their own leftover prescription medication when a child is injured or ill.

"Eighty-five percent of the kids are getting the pain medication from a friend or a family member. ... In terms of perception of risk and actual risk, there's a huge disparity."

Zidow notes significant variation in how alcohol and opioid addictions may play out, although both have the potential to devastate individuals and families. While alcohol addiction is more common, it's a legal substance and people are less likely to lose their jobs over it, she said. Some addicted to alcohol may function fairly well at work and get drunk every night. They may underestimate their addiction.

Opioid addiction becomes harder to mask — and it's harder to function long-term, she noted. With heroin, lives begin to unravel. That was certainly true for Brandon Vinson. His mom and dad could tell quite early that something was wrong, but it would take them a while to figure out what he was using, Lisa Vinson said. And longer still to deal with it.

Ultimately, both types of addiction can lead to social isolation, job loss and breakdowns in family communications and relationships, said Zidow.

Help is available for addicts, although the treatments are quite different for alcohol and opioids. And it's easier — and far less painful — to try to prevent use by youngsters, she added. "For kids, everything is a gateway. They can get some brain damage any time they use anything in that developmental stage. ...If you can prevent children from using anything before age 21, the chance of addiction is negligible."

The advice comes just as the nation are on high alert. In late October, President Trump called opioid abuse a "public health emergency." "We cannot allow this to continue," he said. "It is time to liberate our communities from this scourge of drug addiction."

The entire American Family Survey and related stories and graphics are online here.