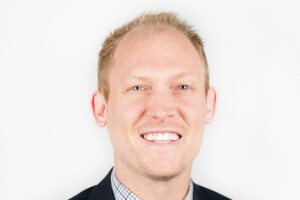 Cayden McFarland is blessed to have found a job in the only profession that can justify an entire childhood spent watching sports and memorizing box-scores.

Cayden was born and raised, by two of the greatest parents ever, in the tiny town of Grants, New Mexico. After graduation, he weighed his NBA Draft options, but instead, decided to give up physical activity all together and attend the University of New Mexico in Albuquerque.

After trying his hand at radio, political opinion polling (yes, he probably called your house at dinner time), and media relations, Cayden finally landed a job at KRQE-TV in Albuquerque.

One year in the news department was quite enough and in July of 2003, Cayden finally landed a sports gig at KTAB-TV in Abilene, TX, where he would meet his beautiful wife-to-be, Allison.

Cayden is proud to call Tulsa his home. He especially loves the passion the Sooner State has for it's sports teams. As a college sports fanatic, Cayden is thrilled to be covering TU, ORU and the Big 12.

Cayden spends most of his spare time hanging out with his wife, watching/talking about sports or quoting lines from some Will Ferrell movie.

Cayden loves to tell local sports stories, so if you have any ideas, feel free to e-mail him at mcfarland@kjrh.com.