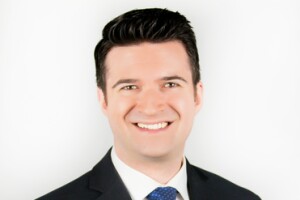 I joined the 2 Works for You Weather Team in December 2015.

Previously, I was the Chief Meteorologist at KRNV, the NBC affiliate in Reno, Nevada from 2008 to 2015. There I tracked severe thunderstorms, flash flooding, snowstorms, wildfires, drought, and earthquakes that would impact the high desert and Sierra. I was very active in the community, including volunteering at charitable events and visiting schools often to talk with students about my job and the weather.

I made a few appearances on The Weather Channel. In 2014, I was a featured NBC affiliate meteorologist in a prime time documentary. It showcased the extreme weather people experienced during the gold rush in what is now the famous Sierra ghost town of Bodie, California.

More recently in 2016, I was just one of a few TV meteorologists hand picked to test out new forecasting algorithms that would be used in conjunction with the GOES-R satellite. Part of the testing included using the new lightning detection capabilities on board the satellite to see if severe thunderstorms are strengthening or decaying. The testing was done during a workshop in Norman at the National Weather Center. The satellite is now in operation covering the eastern United States and Atlantic Ocean.

I earned my Bachelor of Science degree in Meteorology from Lyndon State College in Vermont, where I graduated with honors. I'm a member of the American Meteorological Society and was awarded their Certified Broadcast Meteorologist Seal of Approval. Each meteorologist who has this seal must take a rigorous written examination and have their on camera work evaluated.

If you see me out in the community, please say hello.