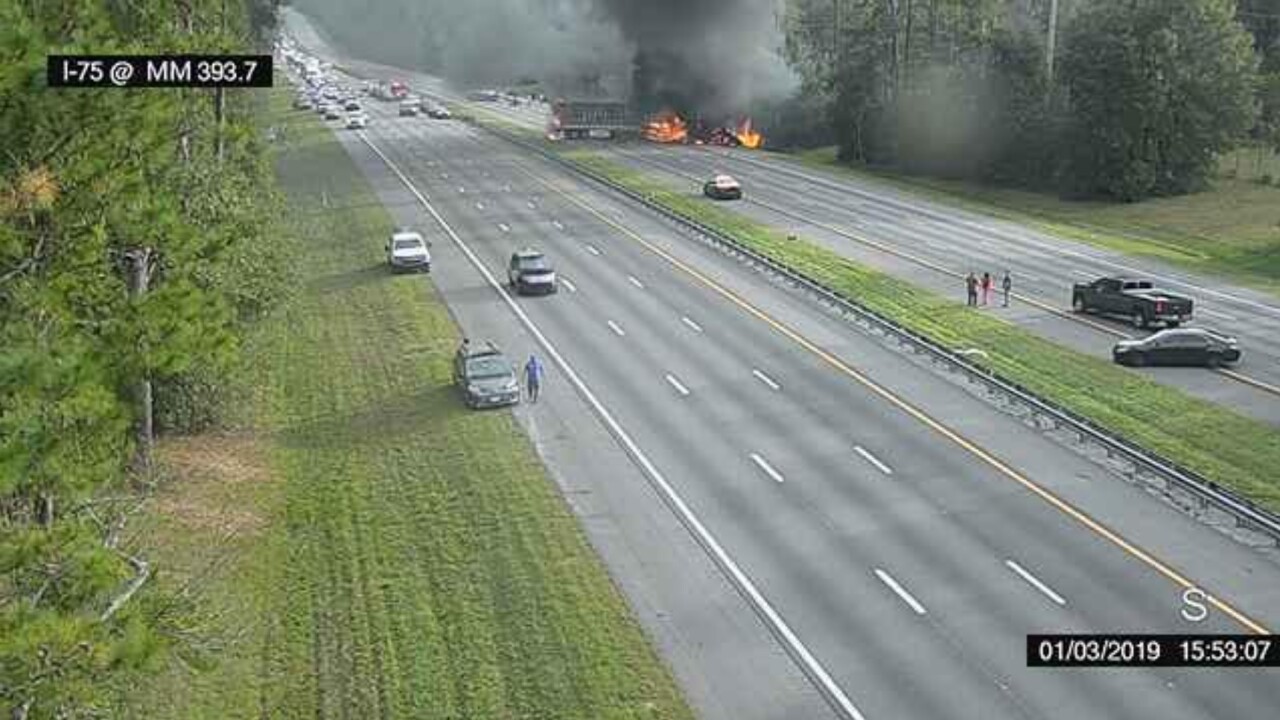 (Copyright 2020 The Associated Press. All rights reserved. This material may not be published, broadcast, rewritten or redistributed.)
AP
This image taken from a Florida 511 traffic camera and provided by the Alachua County Fire Rescue, shows a fiery crash along Interstate 75, Thursday, Jan. 3, 2019, about a mile south of Alachua, near Gainesville, Fla. Highway officials say six people have died after a crash and diesel fuel spill sparked a massive fire on a Florida interstate. (Alachua County Fire Rescue/Florida 511 via AP)

The children were traveling in a large passenger van from Avoyelles Parish, Lt. Patrick Riordan said during a news conference on Friday morning in Alachua, which is south of Gainesville.

On Thursday, a big rig and a passenger vehicle collided in the northbound lanes of the highway and continued across the guardrail and into the path of another big truck and the church van, investigators said.

"Once those semis struck, they both caught fire," Riordan said. He said a fifth vehicle came through and either struck people who had been ejected from the vehicle or debris. Some 50 gallons (1.6 kilometers) of diesel fuel spilled, fueling the fire that also damaged the road in some spots.

At least eight people were sent to the hospital with injuries.

Vinnie DeVita said he was driving south at the time and narrowly escaped the crash - he said it saw it happen in the rearview mirror, immediately behind him, according to a report by WKMG .

"If I had stepped on the brake when I heard the noise, undoubtedly, I would have been in that accident," DeVita said. "And then within probably 15 to 20 seconds of it all, it exploded. I mean, just a ball of flames."

The aftermath closed part of the highway in both directions, causing massive delays along the busy north-south corridor. Authorities opened the northbound lanes around 8 p.m. but all but one southbound lane remained closed Friday morning. Debris, including personal property and vehicle parts, was scattered across the road, the Florida Highway Patrol said. A helicopter helped search for any victims who may have been in nearby woods.

Nicole Towarek was traveling northbound with her family when they came across the scene. She told the Gainesville Sun that black smoke billowed, people were laid out near vehicles, there were long skid marks across the roadway and emergency workers were converging on the area.

"We kept seeing these little explosions and fire," she said. "The heat, it was insane."

It was the worst accident on I-75 in Alachua County since January 2012, when 11 people died in a chain reaction crash attributed to heavy fog and smoke on the roadway, which crosses Paynes Prairie Preserve State Park. Officials were criticized then for not closing the road due to worsening conditions, and later installed cameras, sensors and large electronic signs to help prevent similar crashes.