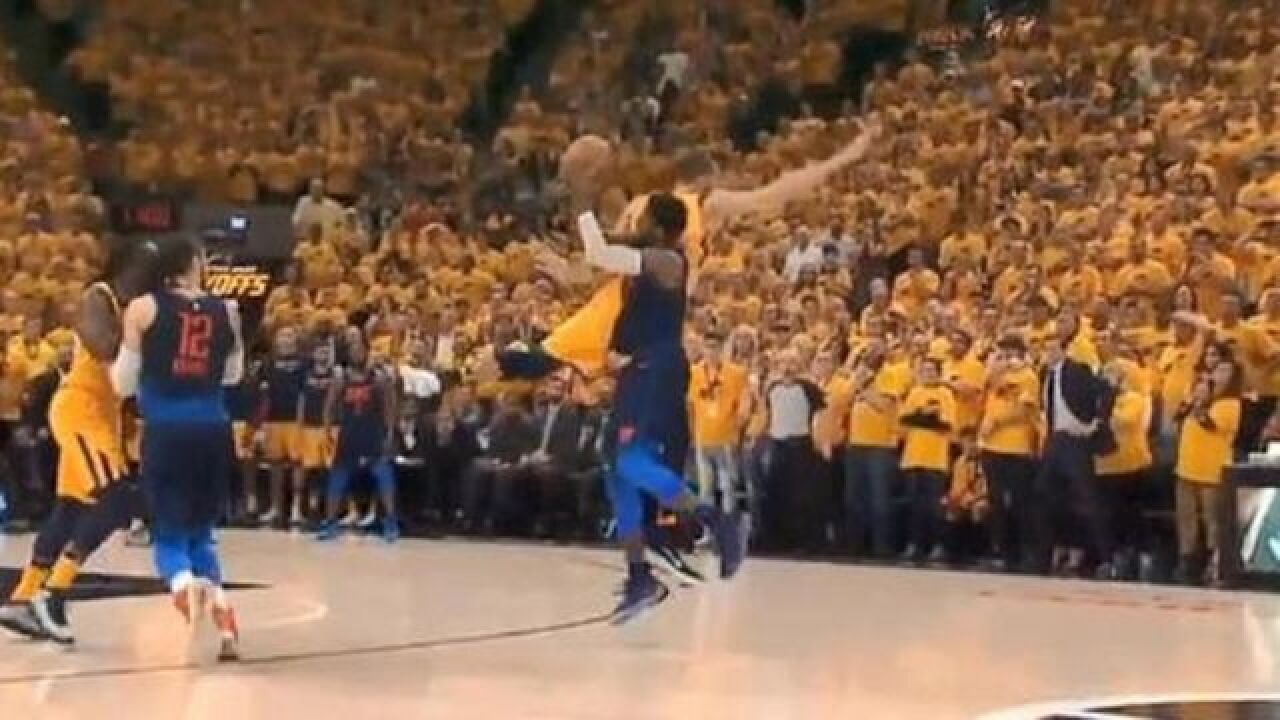 SALT LAKE CITY, Utah (NBC Sports) -- The Oklahoma City Thunder are about to enter one long, hot summer. One that could be the summer of their discontent, but not before they stew quite a bit over a no-foul-call on Paul George's late 3-point shot attempt that would have given him a chance to tie the game at 94-94 in Game 6 of the NBA playoffs against the Utah Jazz.

Make no mistake, the Utah Jazz and Donovan Mitchell earned the 96-91 win in Game 6 at home Friday night. Mitchell exploded for 22 points in the third quarter on his way to a career playoff high 38 points for the game — he looks nothing like a rookie. It was enough to hold off another molten-hot lava night from Russell Westbrook who had 46 points and had to shoulder the entire Thunder offense with Paul George and Carmelo Anthony cratering in a big game.

The win gave Utah a 4-2 series win. Next up for the Jazz, the Rockets starting Sunday in Houston.

To get there the Jazz did get some help from the referees late.

The Thunder were down 13 midway through the fourth but made a late push behind Westbrook to get it within three with less than a minute left. That’s when there was a frantic series of threes and missed lay-ups by the Thunder — misses by Westbrook, by George, by seemingly everybody — and with each miss a Thunder player pulled in or tapped out the rebound to a teammate. Five times it happened.

On that final, fateful attempt, George got the ball out top, pump-faked, got Rudy Gobert in the air (the big man had switched on to him), and Gobert clearly fouls George in the act of shooting.

No whistle. The officials said after the game that Gobert jumped to the right of George, and PG13 jumped into him to draw the contact. Looking at other angles of the replay, George leans into Gobert some, but that’s still a foul in my book. The officials missed that one. We’ll see what the league says in the Last Two Minute Report, and whatever it is it will change nothing.

That play also is not why the Thunder lost. OKC shot 0-of-7 in the final minute and was 2-of-11 in the final three minutes. George had 5 points on 2-of-16 shooting, with more turnovers than points on the night. Carmelo Anthony had just 7 points and was such a defensive liability Billy Donovan had to sit him for crucial stretches. The Thunder offense was predictable, and defensively they had holes that the Jazz were able to exploit. It was not one call that cost the Thunder the game, it was the previous 47 minutes. It was an entire season of not quite coming together right all meshed into one game.

Utah certainly did exploit those OKC holes, starting with Mitchell.

“After Game 5 (when Utah blew a 25 point lead) there was some question if we could handle it, but the character of this team is incredible,” Michell said. “We all played well, we all did what we were supposed to do and everybody came up big.”

Mostly that was Mitchell that came up big. As he has all season, he took on the Utah offense when it needed him to after a dreadful first half, one where Ricky Rubio went to the locker room with a hamstring injury not to return.

Actually, Utah won the first half. Sure, it was tied 41-41 at the break, but that felt like an upset in and of itself. With Rubio out the Utah offense struggled to get into its sets and create good looks. George played good defense in the first half, making life difficult for Mitchell, and with that pressure Utah turned the ball over on 22.2 percent of their possessions in the first half. Plus the Jazz were just 7-of-16 inside three feet of the rim in the first 24 minutes. As a team, the Jazz shot 39 percent in the first half. Meanwhile, Russell Westbrook had 15 points and five assists.

And yet, after a couple Joe Ingles threes and a driving Mitchell bucket late, it was 41-41 after 24 minutes. The Thunder blew their chance to take control of this game.

Mitchell came out on fire after the break and scored first 10 points of the second half for Jazz — each of those involving having ‘Melo’s man set the screen to get a switch — and he kept piling it on as the Jazz stretched their lead out to double digits. For the third quarter Mitchell was 8-o-9 for 22 points, and the Jazz scored 37 in the frame.

The only reason the Thunder were not blown out of the building is Westbrook would not let them be — he had 20 points of his own in the third alone and was knocking down threes like a Curry.

There are those that will complain about Westbrook’s efficiency — he had 46 points but on 43 shots — however in this game, they needed it. With George and Anthony combining for just 12 points, if Westbrook doesn’t go HAM this ends in a blowout.

It still wasn’t enough. And the loss leads into what will be one interesting summer in OKC.

For the Thunder, this loss has to leave a bad taste in Paul George’s mouth as he heads into free agency. Around the league, most sources expect him to leave for Los Angeles, although that is no lock. If George stays and gets a max contract (anything less and he certainly leaves), and Carmelo Anthony opts into his $28 million for next season as expected, all just as Westbrook’s new max deal kicks in, things are going to get expensive in OKC. Considering payroll and luxury tax for being way over the salary cap (and the Thunder will be in the repeater tax, too) bringing back this roster would lead to a more than $250 million payroll. That’s a number that would make the Lakers or Knicks look to shed salary even if they had contenders, let alone the small market Thunder with a team that isn’t going to bring home a ring. If the big three come back, expect the Thunder so have to shed some good role players just to save money.

The Jazz played better as a team all series, with lock-down defense and enough offense to get the win. Just as they had all season. They were able to make Westbrook think as he drove the rim on Rudy Gobert, and their defense kept Oklahoma City’s stars in check.

Whether they can do that against the Rockets is another question, but they earned the chance to try.