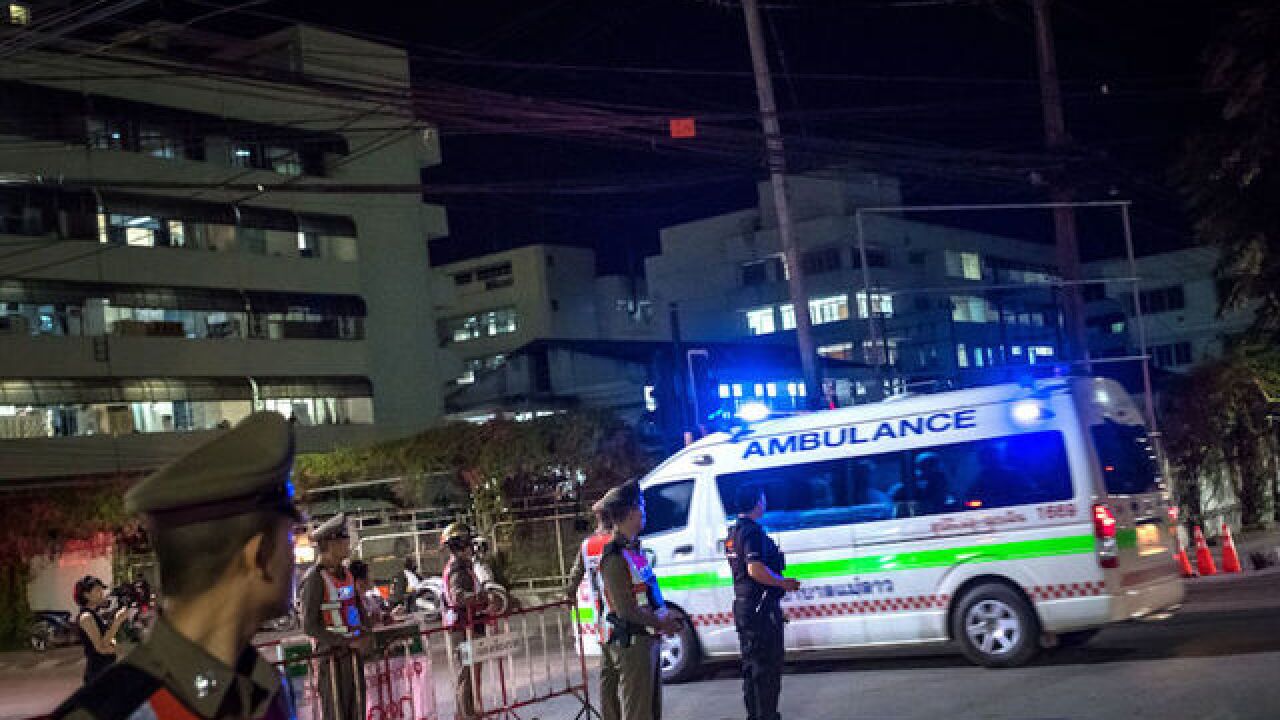 Family members of several of the young Thai soccer players and their coach, freed after almost three weeks trapped deep in a cave in northern Thailand, are still waiting to be reunited with them.

The boys and their coach are recovering in hospital, where medical staff gave more details of their condition Wednesday, a day after they were rescued from a cave by dozens of divers who braved hazardous elements to bring them out.

Health Ministry Inspector, Dr. Tongchai Lertvirairatanapong said the boys were in "good condition," despite each losing an average of two kilograms (4.4 pounds) in weight during their time in the cave.

He attributed their relative good health to their coach, 25-year-old Ekkapol Ake Chantawong, a former monk who was the last person out. "I have to praise the coach who took care of the footballers very well," Lertvirairatanapong said.

He said the children hadn't eaten any food in the nine days before they were found, and drank murky water from inside the cave, which saved them. On Tuesday authorities said some of the boys had asked to eat bread with chocolate spread, but mostly they'll be given a food similar to milk which is rich in proteins and nutrients.

The first boys rescued on Sunday have been allowed to see their relatives through a glass partition and speak to them on a telephone line. They will soon be able to meet them in person, but only while wearing protective clothing to reduce the risk of infection.

The second group of boys rescued has been given approval to see their parents through glass, but the third group are still undergoing tests, he said. The boys are expected to be kept in hospital for at least a week while their immune systems recover.

The extraordinary operation to save the boys came to an end on Tuesday, when the Thai Navy SEAL rescuers and a doctor followed the last four boys and their coach out of the cave complex.

On Wednesday, they too were recovering, nursing battered hands and feet from wading through the cold water in the cave to reach the boys.

"Some have had muscle infections, cold, flu, and some psychologists have been taking care of them to relieve stress," Health Ministry Inspector Lertvirairatanapong said.

Even for some of the world's most experienced cave divers, it set a new standard for difficult rescues.

"The complexity, scale and risk of the operation was unprecedented," Glen McEwen, Australian Federal Police manager for Asia said at a press conference Wednesday.

There was a celebratory mood at the cave entrance, hours after the rescue ended.

Police officers took photographs of each other at the massive cave entrance, as pumps continued to suck out huge volumes of water. Wetsuits and scuba gear still hung along a walkway at the entrance Wednesday, waiting to be sorted by Thai Navy officials.

Even though pumps had brought down water levels significantly in recent days, the still-flooded chambers presented a daunting task for the teams.

One of the men most responsible for the success of the rescue is Australian anaesthetist and underwater cave explorer Richard Harris, who was part of the 20-strong Australian rescue contingent.

He was the last man out of the cave Tuesday but emerged to tragedy, learning of his father's death shortly after the rescue had completed.

Described in a South Australia Ambulance Service statement as a "quiet and kind man" who "didn't think twice about offering his support on this mission" Harry, as he is known, was lauded for his work in throughout the rescue period.

"This is clearly a time of grief for the Harris family, magnified by the physical and emotional demands of being part of this week's highly complex and ultimately successful rescue mission."

As the last boys and their coach were finally brought out, relief and joy flooded through the makeshift village which had sprung up at the mouth of the cave in the two and a half weeks since the boys went missing.

As the last ambulances left the site to transport the remaining rescued team members, a cheer went up, drawing a line under the days and weeks of an agonizing wait for families.

One father, Adisak Wongsukchan, told CNN that he had remained at the rescue scene with the other parents even after finding out that his 14-year-old son, Akarat had been freed on Monday. "I promised the other parents, the five, I will wait and come out together. I'm not going to leave them. We're going to go together," Wongsukchan said.

At a school opposite the hospital in Chiang Rai where the boys are recovering, schoolchildren were in an excited, celebratory mood.

During the roughly nine-hour rescue operation, the boys were underwater for four to six hours, according to Jedsada Chokedamrongsook, the permanent secretary of the Thai Health Ministry.

Each boy was accompanied underwater by two divers carrying their oxygen tanks for them, and guiding them through the murky tunnels.

The most dangerous part of the journey out of the labyrinthine cave system was the first kilometer, during which they were required to squeeze through a narrow flooded channel.

Having completed this section, the boys were then handed over to separate, specialist rescue teams, who helped them through the remainder of the cave, much of which they could wade through.

Questions will remain as to why the team, led by their 25-year-old coach, went into the caves during the rainy season -- it is common knowledge that it is a dangerous time to enter, and signs at the entrance specifically warn of the dangers of monsoon rains.

Nopparat Kanthawong, the head coach of the Wild Boars team, told CNN that he did not know why the boys had gone into the cave. "At this time, now that the coach is out, just wait until he gives any statements and let's just wait altogether and find out at the same time," he said in an interview.

Kanthawong said he just wanted to support the team now that the players were out. "I'm going to give them a hug," he said.