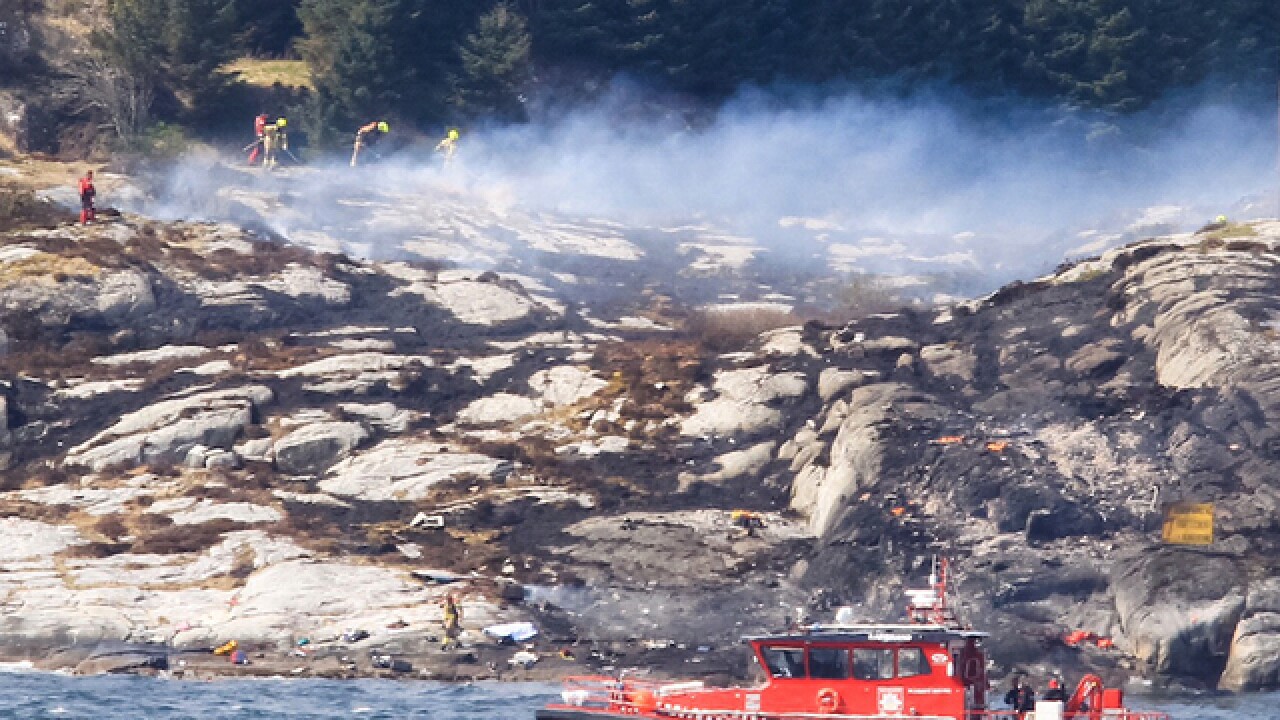 Copyright Associated Press
Rune Nielsen
<p>A search and rescue vessel patrols off the island of Turoey, near Bergen, Norway, as emergency workers attend the scene of a helicopter crash believed to have 13 people aboard, Friday April 29, 2016. The helicopter carrying around 13 people from an offshore oil field crashed Friday near the western Norwegian city of Bergen, police said. Many are feared dead. (Rune Nielsen / NTB scanpix via AP)</p>

A helicopter carrying 13 people from an offshore oil field crashed Friday near the western Norwegian city of Bergen, sparking a rescue operation, police and rescue officials said. Many onboard are feared dead.

The crash hit the island of Turoey, near Bergen. Police spokesman Morten Kronen said the helicopter "is totally smashed." He told The Associated Press there were "reports of an explosion and thick smoke" and that some people were reported to be in the sea.

He later said so far police could not confirm any survivors.

"It is a very small island and (helicopter) parts are spread partly on land, partly in the sea," said Jon Sjursoe, a spokesman for Norway's Joint Rescue Coordination Center.

Sjursoe said the Eurocopter EC-225 helicopter was carrying 11 passengers and two pilots and belonged to CHC Helicopter, which could not be immediately reached for comment.

"We have a big (rescue) operation going on out there," Kronen said, adding that it included firefighters, divers and medical workers

"Then we heard a violent explosion," Andersen was quoted as saying.

The helicopter was on its way from the Gullfaks B oil field in the North Sea to Bergen, 120 kilometers (74 miles) away on the Norwegian mainland.

Norwegian oil and gas company Statoil ASA said in a brief statement it had "mobilized its emergency response team" but declined to comment further. It later added it had "temporarily grounded all equivalent traffic helicopters."

Norwegian Prime Minister Erna Solberg wrote on Twitter about the "horrifying reports" and said she was being kept informed about the rescue operation.