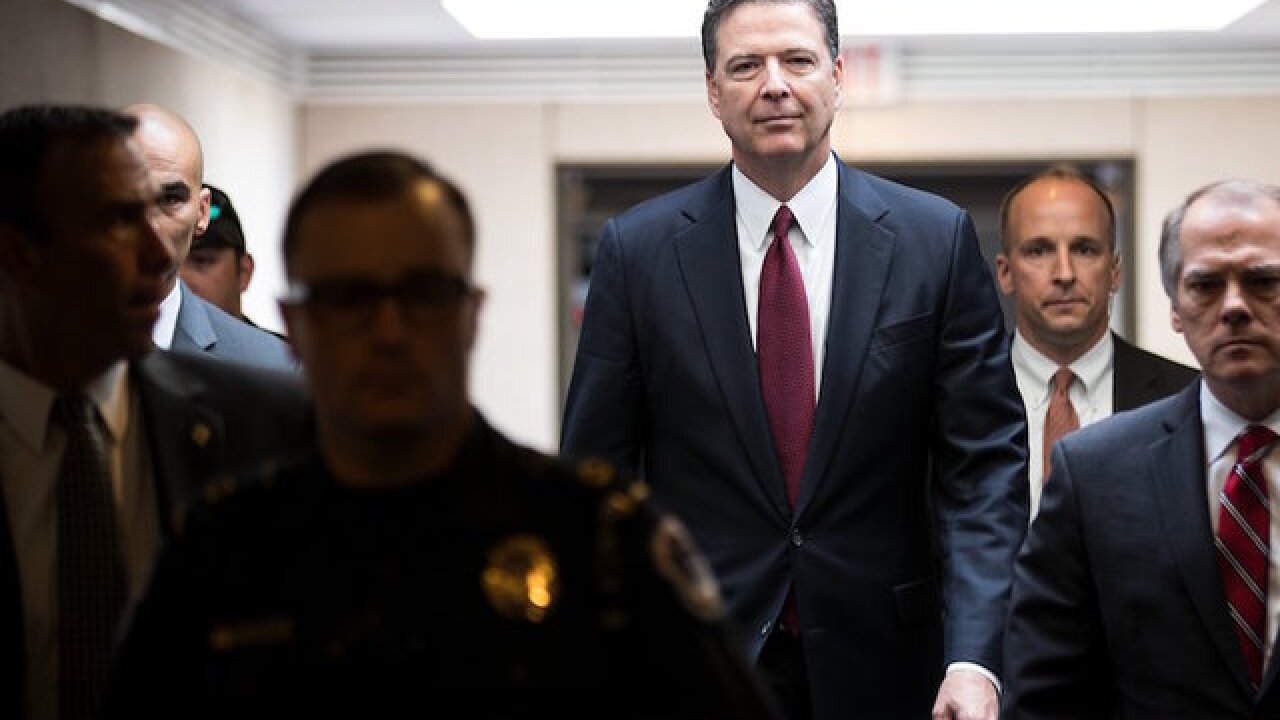 © 2018 Cable News Network, Inc.
Drew Angerer/Getty Images
<p>Then-President Barack Obama reassured then-FBI Director James Comey of his support after the 2016 election during a private meeting in the Oval Office, Comey writes in his upcoming book, according to The Washington Post.</p>

Former FBI Director James Comey warned that if President Donald Trump ever tries to fire special counsel Robert Mueller, then it would be the President's "most serious attack yet on the rule of law," and said that "it's possible" the Russians could have information on Trump that could be used to compromise him.

Comey also said Trump is "morally unfit to be president" and claimed there is "certainly some evidence of obstruction of justice" by Trump.

The comments came during a wide-ranging, exclusive interview with ABC News chief anchor George Stephanopoulos. The media appearance is the first time Comey has sat for a televised interview since Trump fired him last year. It also kicks off a promotional tour that the former FBI director is embarking on to promote the release of his new book, "A Higher Loyalty."

During the interview, Stephanopoulos asked Comey what it would "mean if President Trump tries to fire Robert Mueller." Comey responded, "It would, I hope, set off alarm bells that this is his most serious attack yet on the rule of law. It would be something that ... is higher than all the normal fights about policy. It would be to the everlasting shame of partisans if they were unable to see that higher level and to protect it."

Mueller is investigating Russian interference in the 2016 election and any potential ties between Trump campaign associates and Russia. Trump has repeatedly called the investigation a witch hunt and denied any collusion.

Stephanopoulos also asked Comey if he thinks the President has been compromised by the Russians.

"I think it's possible, I don't know," Comey said. "I wish I wasn't saying it, but it's the truth. It always struck me, and still strikes me, as unlikely, and I would have been able to say with high confidence about any other president I dealt with, but I can't, it's possible."

"There's a non-zero possibility that the Russians have some, some sway over him that is rooted in his personal experience, and I don't know whether that's the business about the activity in a Moscow hotel room or finances or something else," Comey said.

In the ABC News interview, Comey offered a scathing judgment about whether Trump is qualified to serve as president, saying that he believes Trump is "morally unfit" to serve in the nation's highest office.

The former FBI director went on to say that a person "who talks about and treats women like they're pieces of meat, who lies, constantly, about matters big and small, and insists that the American people believe it -- that person is not fit to be president of the United States on moral grounds."

But Comey said he does not want to see Trump impeached. When Stephanopoulos asked the former FBI director if Trump should be impeached, Comey said, "I hope not, because I think impeaching and removing Donald Trump from office would let the American people off the hook -- people in this country need to stand up, go to the voting booth, and vote their values. Impeachment, in a way, would short-circuit that."

'Some evidence of obstruction'

During the interview, Comey repeated his assertion that Trump told him that he expected loyalty and pressured him to drop an investigation into Michael Flynn. The former national security adviser has since pleaded guilty to lying to the FBI and is now cooperating with the special counsel.

When Stephanopoulos asked Comey, "was President Trump obstructing justice?" Comey responded, "Possibly. It's certainly some evidence of obstruction of justice."

Trump has denied asking Comey to stop investigating Flynn and insisted he never asked for loyalty.

When Comey testified before the Senate Intelligence Committee last year, he said that he did not know if Trump obstructed justice, adding, "that's Bob Mueller's job to sort that out."

In his book, Comey deferred to the Mueller investigation on the question of obstruction.

"I presume that Bob Mueller's team is investigating ... whether or not urging me to back the FBI off our investigation of his national security adviser and in firing me, President Trump was attempting to obstruct justice, which is a federal crime," Comey writes. "It's certainly possible."

In a statement on Sunday, Republican National Committee Chairwoman Ronna McDaniel said that Comey has "no credibility," and that his "publicity tour reaffirms that his true higher loyalty is to himself."

"A Higher Loyalty" won't be formally released until Tuesday, but explosive details have already spilled out into the media. Major media outlets, including CNN, obtained copies of the book last week and quickly published reports on its scathing and unsparingly critical depictions of the President. According to those reports, Comey writes that Trump is "unethical and untethered to the truth" and compares his presidency to a "forest fire."

The President and his allies have launched a forceful counterattack. On Sunday morning, Trump unleashed a series of tweets accusing Comey of revealing classified information, suggesting he should go to jail, and saying that he "will go down as the WORST FBI Director in history." On Friday, White House press secretary Sarah Sanders said that Comey "will be forever known as a disgraced partisan hack."

Comey has indeed faced criticism from Republicans and Democrats alike -- and the release of his book gives him a high-profile platform to defend himself. Democrats have faulted Comey for his handling of the investigation into Hillary Clinton's use of a private email server as secretary of state. Comey announced in July 2016 that he would not recommend charges against Clinton, but stated publicly that Clinton and her aides had been "extremely careless" in handling classified information. Clinton herself has pointed to Comey's actions in explaining her presidential election loss. But Comey writes in his book that after the 2016 election, then-President Obama told Comey that he remained confident in his "integrity" and "ability."

The publicity tour -- and the book -- will be the first time the American public has heard extensively from Comey since his explosive testimony before the Senate Intelligence Committee in June of last year. In a written statement to the committee, Comey claimed that Trump had asked him for "loyalty." Comey also revealed during the hearing that he documented his interactions with Trump because he was "concerned" that the President "might lie about the nature of our meeting."

Trump has denied having asked Comey for his loyalty.

In his press tour, Comey is sure to be asked to weigh in on Trump and the various twists and turns in special counsel Robert Mueller's investigation into Russian meddling in the 2016 election as well as any potential links between Russia and Trump campaign associates.

When Trump fired Comey in May 2017, the administration cited a memo written by Deputy Attorney General Rod Rosenstein criticizing Comey's handling of the inquiry into Clinton's email server. But Trump later said he was thinking about "this Russia thing" around the time he decided to fire Comey.

In his testimony to the Senate Intelligence Committee last year, Comey said he believes the President asked him to "drop any investigation of Flynn," a reference to former national security adviser Michael Flynn. Flynn has since pleaded guilty to lying to the FBI about his contacts with Russia's ambassador and is now cooperating with the Mueller investigation. Trump has called the special counsel probe a "witch hunt" and repeatedly insisted there was no collusion between his campaign and Russia.