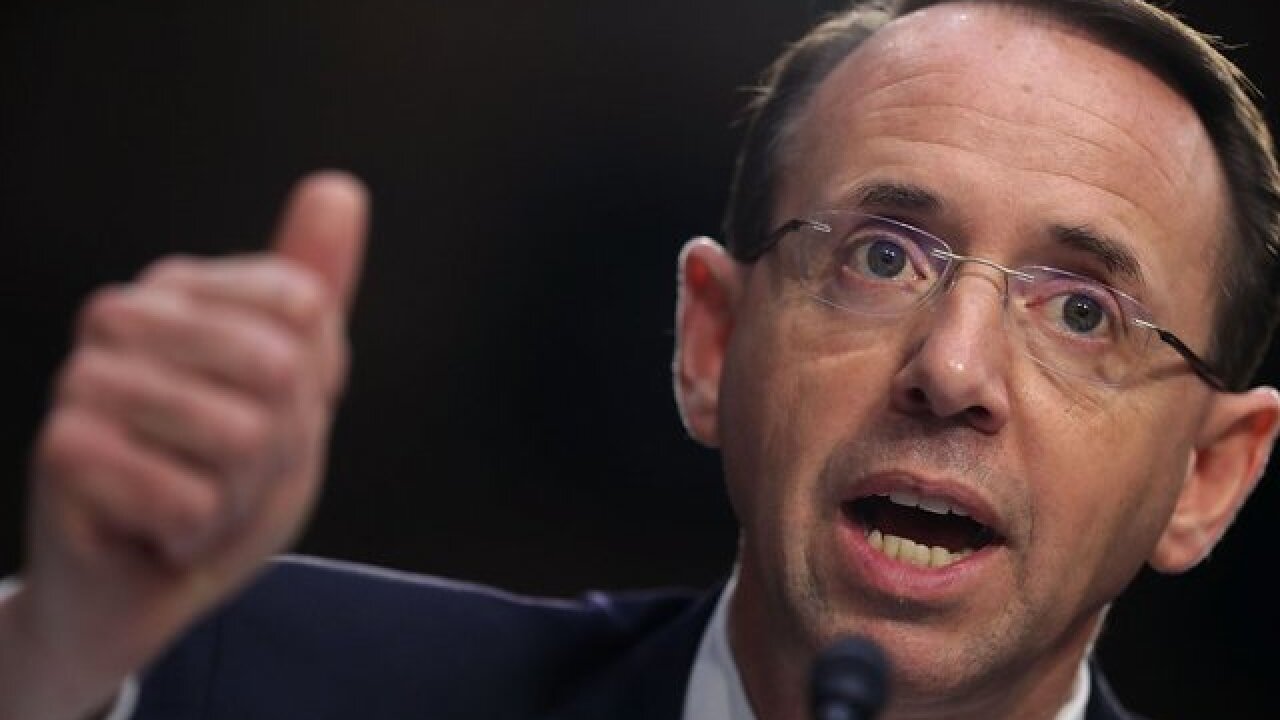 House Intelligence Chairman Devin Nunes' dispute with Depuity Attorney General Rod Rosenstein and FBI Director Christopher Wray appeared to de-escalate Wednesday after Nunes was given access to the document that kicked off the FBI's investigation into the Trump campaign and Russia.

Nunes had been threatening to hold Rosenstein and Wray in contempt -- and to potentially impeach them -- if the Justice Department didn't cooperate with his committee amid stepped-up congressional Republican criticism of Rosenstein as President Donald Trump considers whether to fire him.

A Justice official told CNN that Nunes and Republican Rep. Trey Gowdy of South Carolina went to the Justice Department on Wednesday to view the document, known as an electronic communication, which details the origination of the counterintelligence investigation into Trump's team and Russia that began in July 2016. The official said the document was no longer redacted, except for "narrowly tailored" redactions to protect the name of a foreign country and foreign agent that, if revealed, could undermine "the trust we have with this foreign nation."

Nunes disagreed with that characterization, saying the committee's subpoenas "remain in effect," but he also had kind words for Rosenstein.

"Although the subpoenas issued by this Committee in August 2017 remain in effect, I'd like to thank Deputy Attorney General Rosenstein for his cooperation today," the California Republican said in a statement.

Nunes' comments were a stark change from his position 24 hours ago.

But Rosenstein isn't out of hot water on Capitol Hill yet, as Republicans on the Judiciary and Oversight committees have also slammed him over failing to provide documents related to the FBI's handling of the Hillary Clinton email investigation.

Senior Republicans on the key committees in the House bluntly warned that it was time to hold the senior officials in contempt.

"I would certainly support that," Rep. Peter King, an ally of Trump's who sits on the House Intelligence Committee, told CNN earlier Wednesday when asked about holding Wray and Rosenstein in contempt. "We need these documents and they won't give them to us. They've been stonewalling us for a year on one document after another."

Congressional action against Rosenstein, who appointed special counsel Robert Mueller and has the authority to fire him, could add to Trump's ire toward the deputy attorney general. And if the House were to take aggressive action against Rosenstein, it could give Trump cover to fire the deputy attorney general, who is ultimately in charge of the Mueller investigation.

In addition to Nunes' demand, House Judiciary Chairman Bob Goodlatte, a Virginia Republican, has subpoenaed the Justice Department demanding a wide range of documents about the FBI's handling of the Clinton email investigation in 2016. In response, the department delegated dozens of more staff to comply with the request and named a US attorney from Utah, John Lausch, to oversee the document production.

Still, Republicans say the response has been paltry, giving ammunition for Trump to go after Rosenstein.

While Republicans have been threatening to hold Rosenstein and Wray in contempt of Congress if they don't cooperate with both the House Intelligence and House Judiciary committee subpoenas for documents, Nunes' comments appeared to be the first to suggest impeachment.

Meadows said the first step would be for Congress to hold Rosenstein and Wray in contempt, and impeachment could follow if the documents still aren't produced. "It would be the first step you hold them in contempt, then you have other tools in the toolbox if you do not get the documents," he said. "But it is certainly on that path to impeachment."

CNN reported Tuesday that Trump is considering firing Rosenstein in the aftermath of the FBI raid of the office of his personal lawyer, Michael Cohen.

The top Democrat on the House Intelligence Committee, Rep. Adam Schiff of California, said Wednesday that the threat from the GOP serves "insidious purposes: to intimidate DOJ and FBI, to provide the President with a pretext to fire Deputy Attorney General Rosenstein and FBI Director Wray, and to undermine special counsel Mueller's investigation."

A GOP leadership aide said Nunes has not spoken to House Speaker Paul Ryan yet about the possibility of moving to hold Wray or Rosenstein in contempt.

Nunes had given the Justice Department a Wednesday deadline to provide an unredacted copy of the document, saying what they had previously provided in redacted form was not sufficient.

Still, firing Mueller or Rosenstein would prompt a backlash from many Republicans on Capitol Hill, who have publicly cautioned Trump against taking steps against the special counsel's investigation.

King, a New York Republican, said while he supports holding Wray and Rosenstein in contempt if they don't turn over the documents, he was opposed to any effort that would oust them because of the Pandora's box it would open with the Mueller investigation.

"There's the consequences of Rosenstein that would open up. It would just create a firestorm," King told CNN. "Whether it's right or wrong to do it, the fact is it would create a firestorm that doesn't make it worthwhile."