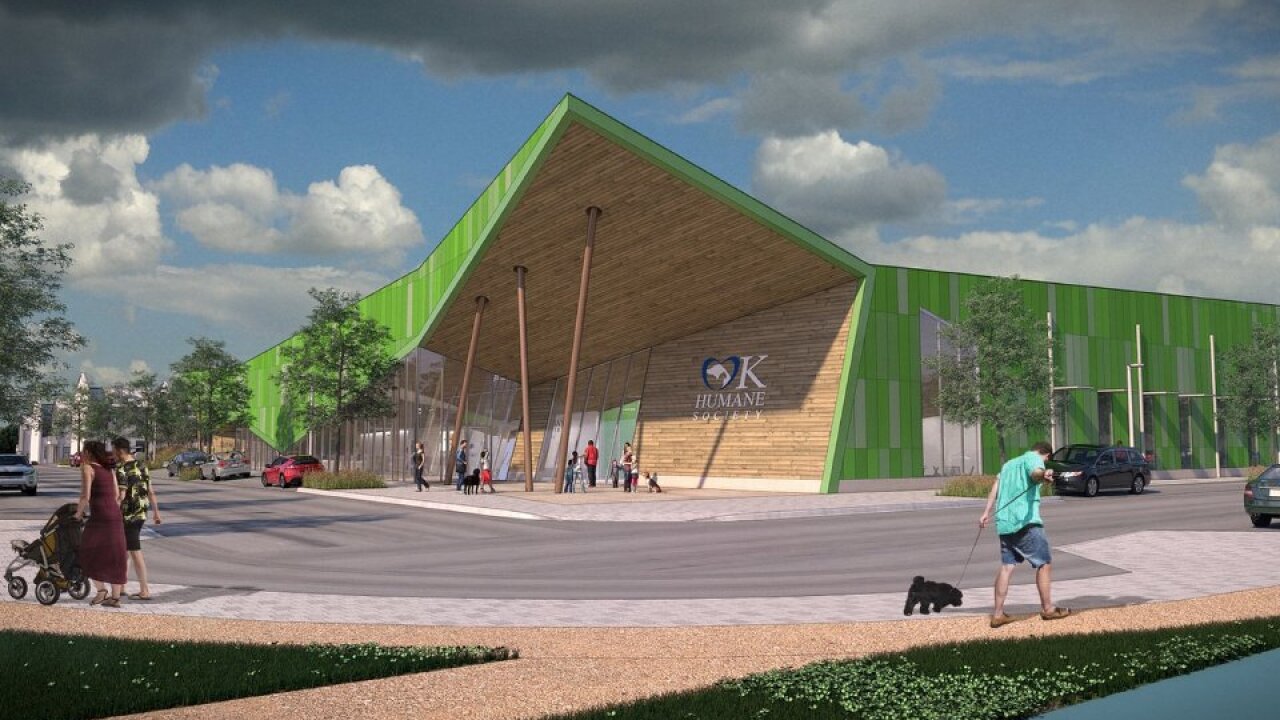 A two-story new campus for the Oklahoma Humane Society is being proposed as the potential first new development along the future south segment of Scissortail Park. [Renderings by Butzer Architects and Urbanism]

OKLAHOMA CITY (AP) -- A $20 million Oklahoma Humane Society campus is being proposed for an Urban Renewal block facing the south and west edges of the future lower Scissortail Park.

The Humane Society already owns the one parcel not controlled by Urban Renewal and is seeking to be named developer of the remaining 2.3 acres so it can begin official fundraising.

Board member Frank Hill said the group already has visited with potential donors, but fundraising can't be started until the humane society is in control of the land. Their proposal calls for an opening in 2022 to coincide with completion of the lower half of Scissortail Park.

"We think this will have some regional appeal and some national appeal," Hill said to The Oklahoman.

Dana McCrory, CEO at the humane society, said the campus will allow for expansion of operations that are currently spread out at four different locations. The two-story building is designed to span 35,000 square feet and would be an anchor for the south half of the park.

"The new OK Humane Society campus will not only provide a larger and healthier environment for animals in our care but will also significantly improve the experience of adopters, volunteers and our community," McCrory said. "Our entire mission is based on heart and this is the heart of the city. You can get here from any part of the city and this is part of the downtown movement. This is where the next generation is going to be and we are building this for the next generation."

Conceptual designs by Butzer Architects and Urbanism, submitted to the Urban Renewal Authority, show a campus intended to blend in with the surrounding park and nearby Skydance bridge (designed by Butzer), and with urban street frontage and "floppy ear" entrances to provide a whimsical tribute to the mission of the campus.

The humane society, a 501c3 nonprofit, was started 12 years ago when only 25 percent of about 30,000 dogs and cats coming into the Oklahoma City Animal Shelter were being placed in new homes.

"The live release rate at the animal shelter was pretty dismal," McCrory said. "There were many animals coming in and not many coming out. Our first mission was to increase the animals leaving animal welfare."

The live-release rate last year hit 86 percent, nearing the goal of 92 percent that McCrory said would rate Oklahoma City as a top-tier no-kill community. Over the past 12 years the society has placed more than 155,000 animals in new homes.

The humane society is set to continue its spray and neutering operation in south Oklahoma City but will relocate its offices and adoption services to the new campus.

About 160 families currently foster pets as part of the operation, and expanded services would include education on humane treatment of animals, training, behavior medication, a fully staffed veterinary clinic, intake, kennels, fostering and adoption services.

A "cuddle court" will provide visitors, even downtown workers needing a stress break, to spend time with the animals.

The campus also is set to include a store, "Animal Bling," that will offer a variety of items including custom collars, leashes and toys.

"It's a one-stop shop," McCrory said. "If you come in for an animal, you can leave with everything you need."

Cathy O'Connor, Urban Renewal director, said she expects the humane society proposal, the only one submitted, will be reviewed and could be considered for developer designation in March.

McCrory said the campus is designed to reflect the ongoing cooperative efforts with the city's animal shelter and shared goal of making Oklahoma City a no-kill community.

"The shelter is always going to have a vital role," McCrory said. "We at OK Humane do not do animal control, we do not do animal cruelty cases. By freeing up their time to do more of those cases, we will see a more humane city in our horizon."

------
Information from: The Oklahoman, http://www.newsok.com
-----
Copyright 2019 The Associated Press. All rights reserved. This material may not be published, broadcast, rewritten or redistributed.