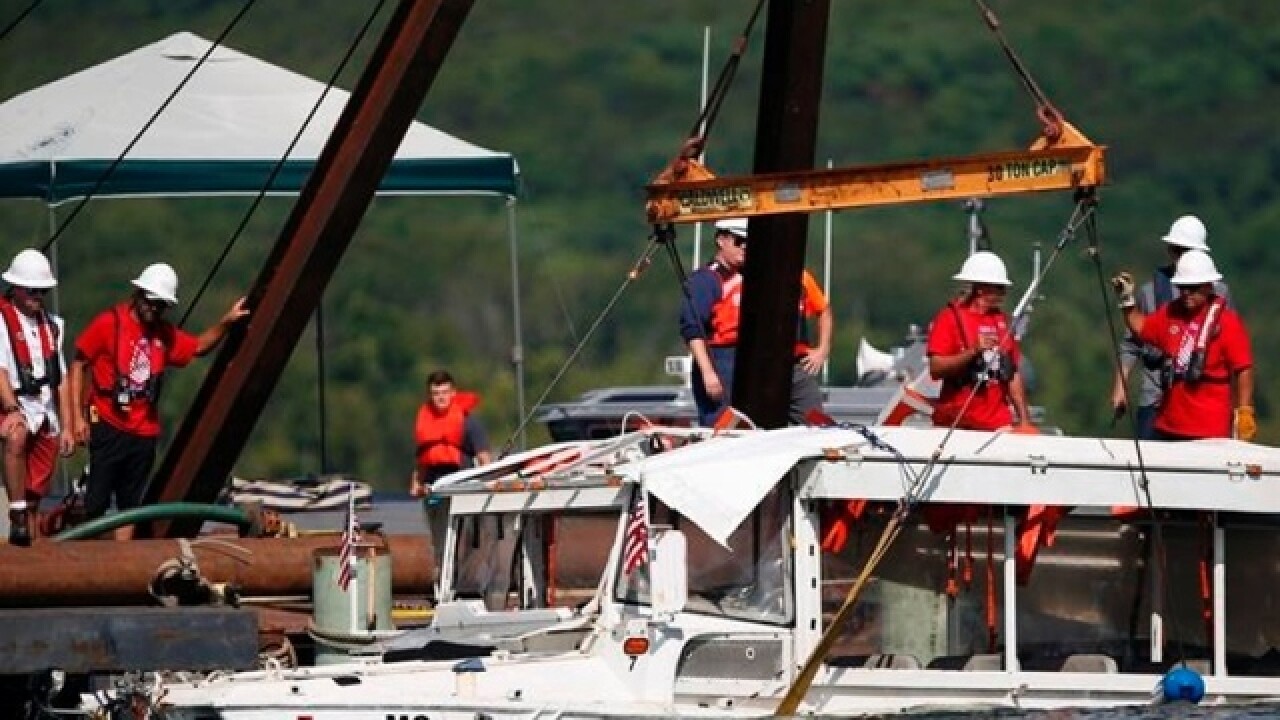 Copyright 2018 The Associated Press. All rights reserved.
(Nathan Papes/The Springfield News-Leader via AP, File)
<div class="carousel-caption mb-2 pr-3"> <div>FILE - In this July 23, 2018, file photo, a duck boat that sank during a thunderstorm on July 19, killing 17 people on Table Rock Lake in Branson, Mo., is raised from the bottom of the lake. A company facing multiple lawsuits over the summer tourist boat accident in Missouri has invoked an 1851 law that allows vessel owners to try to limit their legal damages as it also seeks settlement negotiations with victims' family members. Attorneys for Ripley Entertainment Inc., based in Orlando, Fla., cited an old federal law in a filing Monday, Oct. 15, 2018, in federal court in western Missouri.</div> </div>

Two companies facing multiple lawsuits over a summer tourist boat accident in Missouri that killed 17 people have invoked an 1851 law that allows vessel owners to try to avoid or limit legal damages as they also seek settlement negotiations with victims' family members.

But Tia Coleman, an Indiana woman who survived the accident, and lawyers for others whose family members died denounced the filing Monday by attorneys for Ripley Entertainment Inc., based in Orlando, Florida, and Branson Duck Vehicles of Branson, Missouri, as callous and insulting. The companies' filing was in federal court in western Missouri, where multiple lawsuits are pending.

"Ripley's inhuman legal ploy will sink as fast as their death trap duck boat did," Robert Mongeluzzi, a Philadelphia attorney representing accident victims, said in a statement Monday night. "We will legally and factually demolish this frivolous claim."

If a judge concluded that the federal law cited by Ripley and Branson Duck Vehicles applies, claims for damages over the July 19 accident on Table Rock Lake near Branson, Missouri, could be consolidated into a single federal court case. The companies' petition states that under the federal law, they would not owe any damages because the boat carried no freight and was a total loss.

But the filing came less than a week after attorneys for Ripley and Branson Duck Vehicles asked U.S. District Judge M. Douglas Harpool for a 90-day extension of court filing deadlines so that they could pursue a potential settlement. Harpool said he would consider the request at a Nov. 1 hearing.

Ripley spokeswoman Suzanne Smagala-Potts said the type of filing made Monday is "common in claims related to maritime incidents." She said the goal is to delay the multiple court cases to give the parties time for mediation.

"We have reached out to those most impacted by the accident and offered to mediate their claims now," Smagala-Potts said in a statement. "Mediation often leads to faster resolution and allows those affected to avoid a lengthy process of litigation, and most importantly, begin the healing process."

Ripley owns the Ride the Ducks operation on Table Rock Lake, while Branson Duck Vehicles owned the boats. Their request last week for a delay in court deadlines said parties in the lawsuits are "actively working" to schedule mediation to resolve the federal and state court lawsuits.

And Smagala-Potts said Monday that two Kansas City-area attorneys experienced in mediation have agreed to lead negotiations and would consult with Kansas City, Missouri, Mayor Sly James, who also is an attorney.

She said the boat operators continue "our commitment to support all guests, employees, and members of the community who were affected by July's tragic accident."

But Mongeluzzi said there have been no settlement offers.

"Ripley's claims of supporting these families are false," he added.

The tourist duck boat capsized in rough water on the lake after a storm moved through the area. The victims included nine members of Coleman's extended family , and one federal lawsuit pursued by Mongeluzzi and his fellow attorneys is seeking $100 million in damages on behalf of two of the deceased family members.

That lawsuit says the boat operators violated the company's policies by continuing with the ride despite the weather warnings and by not telling passengers to put on life jackets when the water got rough. The boat's driver instead lowered plastic side curtains, which further trapped passengers, according to the lawsuit.

The lawsuit also cites an August 2017 report from a private inspector who warned Ripley Entertainment that the vessels' engines -- and pumps that remove water from their hulls -- were susceptible to failing in bad weather. And it accuses the defendants of ignoring warnings issued by the National Transportation Safety Board that the vehicles, which are designed to operate on land and water, should be upgraded to ensure they remain upright and floating in bad weather.

Coleman accused the Ripley and Branson Duck Vehicle attorneys of arguing that her husband and three children, who drowned in the accident, "are worthless" and called for a boycott of Ripley attractions.

Ripley Entertainment has said that the boat's sinking was "an unforeseeable and unintentional occurrence."

In its latest filing, it said the boat was "in all respects and properly manned, equipped and supplied" and that its sinking was not caused by "any fault, neglect or want of care" by the companies.