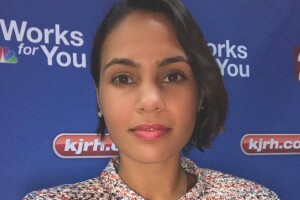 Sierra attended East Texas Baptist University and she majored in Mass Communication, minored in PR, wrote for the newspaper, and played for the tennis team.
After graduation, she spent almost two years at the ABC affiliate in Shreveport, LA (KTBS). She participated in award-winning election coverage, by the Louisiana Association of Broadcasters.
After leaving KTBS she spent the next year working for another ABC affiliate (KRGV) at the south Texas/Mexico border — an unforgettable experience.
In her spare time she enjoys exploring with her dog and hiking trails as well as brushing up on tennis from time to time.