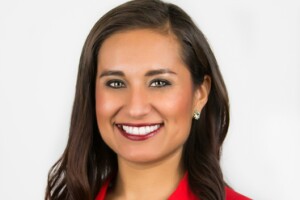 I joined 2 Works for You in May 2015. You can catch me anchoring on weekend mornings and reporting during the week.

I am originally from Yuma, Arizona, but I am happy to be in Green Country covering news in the community. Thanks to EW Scripps, I have been able to continue my higher education and am pursuing my Master’s in Strategic Communication Management at Oklahoma State University (Go Pokes!). I earned my Bachelor’s degree at Arizona State University (Go Sun Devils!).

Before coming to Tulsa, I was a multimedia journalist at KMIR, the NBC affiliate in Palm Springs, California from 2013 to 2015. I covered general assignments such as education and crime. I was nominated for an Emmy for a remarkable story of a one-year-old boy who survived a flood in the desert. Prior to that, I was a reporter trainee for NBC 7 San Diego from 2012 to 2013. I was one of 10 college graduates selected for the highly-competitive program.

In my spare time, I like to try new restaurants in town, travel, take photos with my Nikon DSLR and watch crime series on Netflix.