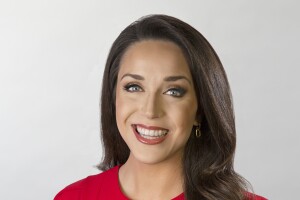 You can watch me from noon to 1 p.m. Monday through Friday and you can catch my special reports in the 5, 6 and 10 p.m. newscasts.

In 2017 I was recognized by TARC Tulsa for 'Charlie’s Story,' a series about a family fighting for their Autistic son’s health coverage. To this day, “Charlie’s Story” is one of my favorite reports I’ve done. The family graciously shared their struggles with me and together we were able to help so many families in Green Country.

I moved to Tulsa from Denison, Texas where I anchored for the local NBC/ABC/CW affiliate KTEN-TV. I’m a second-generation graduate of the University of Kansas where I earned my Bachelor of Art’s degree in Political Science and Communications. Rock Chalk!! I’m an Alumna member of Sigma Kappa Sorority and a member of The DAR (Daughters of the American Revolution).

So where am I from? I was born and raised in a suburb of Houston, TX where my family still calls home.

I live in Tulsa with my miniature schnauzer named Gryffin (short for Gryffindor). When I’m not anchoring a newscast or running down leads on stories, you can find me highly caffeinated, exploring new restaurants with friends, hanging out with Gryffin or taking a barre class or two. I love traveling, a good book, weekends at the lake, OKC Thunder games, Kansas basketball, trips to Dallas, coffee and all the animals. I own a ridiculous number of coffee mugs and I’ve never met a candle I didn’t smell (and maybe buy).

If you see me around town, don’t be afraid to say “Hi!”